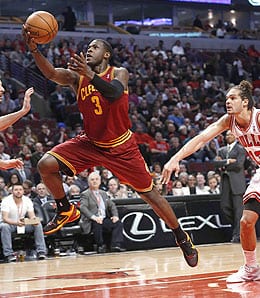 Before we delve into this week’s free agent recommendations, keep an eye on the Los Angeles Lakers point guard situation next week. Kendall Marshall has done a terrific job holding down the starting job after injuries sidelined Steve Blake, Steve Nash and Jordan Farmar. With all three supposedly nearing a return, this is a situation that bears watching. How Coach Mike D’Antoni divides up the playing time will determine the Fantasy value of each.

Dion Waiters, SG, Cleveland Cavaliers: Waiters was the fourth overall pick in the 2012 draft and is finally starting to show the offensive consistency that he hinted at in the Summer League (see video below). He has scored 21 points in each of his last two games, totaling five treys and four steals in the two games. Slowly but surely Waiters has improved his passing skills leading to increased assist totals.

Devin Harris, PG/SG, Dallas Mavericks: After the missing the first half of the season to a toe injury, Harris has returned as a key player off the Mavs bench. He can help teams in deep leagues with his scoring and assists.

Tim Hardaway Jr., SG, New York Knicks: While on the topic of firepower off the bench, how about the recent rise of Hardaway Jr.? He doesn’t possess the crossover dribble of his father (former Golden State star) but he certainly has the scoring genes. Over his last three games, Hardaway Jr. is averaging 21 points with a combined 12 treys. With several Knicks enduring down seasons, Hardaway should continue to get the chance to shine.

Patrick Beverley, PG, Houston Rockets: Beverley has never been a consistent offensive performer for the high scoring Rockets attack. However, recently he is showing the ability to sink the threeball and tally a sufficient amount of assists and steals.

Terrence Ross, SF/SG, Toronto Raptors: When the Raptors dealt Rudy Gay to Sacramento in mid-December, we recommended the immediate acquisition of Ross. For those of you who followed our advice, congratulations. Ross hit for 51 points last Saturday, tying the Raptor franchise single-game mark in an effort that included 10 treys, and his solid production has continued since. What is more uplifting for Fantasy owners who own or are contemplating adding Ross, is the increased rebound and block totals during this current streak.

DeMarre Carroll, SF, Atlanta Hawks: Carroll is the best kept secret in Fantasy basketball right now. Over the last five games, Carroll is quite simply doing it all for the Hawks — shooting over 50 per cent from the field with impressive range from three-point land while racking up rebounds and steals that are on par with the best defensive small forwards.

Gerald Wallace, SF, Boston Celtics: We’re sure many of you remember years past when Wallace was a stud Fantasy performer as a member of the Sacramento Kings and Portland Trail Blazers. Age and injuries have somewhat deteriorated his skills, but recently he has shown flashes upon being promoted to the Celtics starting unit. Keep an eye on Crash as he possesses the capability to be a multi-category performer in deep leagues.

Marcus Morris, PF, Phoenix Suns: While twin brother Markieff Morris has been getting all of the attention this season, Marcus has quietly been a valuable asset off the Suns bench. Playing together with his sibling, Marcus has averaged 16 points and five boards in his last two games. The key here is for him to regularly get 25 MPG. If so, Marcus can be an asset.

Ronny Turiaf, C/PF, Minnesota Timberwolves: Turiaf is a nice short-term add with Wolves starter Nikola Pekovic sidelined by ankle bursitis. Pekovic has been known for being somewhat injury prone in the past and the exact length of this current hiatus is still murky. Turiaf excels in rebounding and especially shot blocking, so if you need someone to throw a block party for your team, consider the former Gonzaga star.

Timofey Mozgov, Denver Nuggets: Coach Brian Shaw indicated he wants to get the ball to Mozgov in the paint more often. Mozgov has already been a pleasant surprise for Fantasy owners this season and may continue to show improvement.

Greg Stiemsma, New Orleans Pelicans: While Anthony Davis (finger) is expected back Saturday, Stiemsma has shown he deserves regular rotation time, going off for 23 rebounds, 12 points, three blocks and three steals in the last two games, the second of which the uni-browed one missed.

Now it’s your turn. In the comments below, let us know who your favourite Fantasy basketball waiver wire pick of the week is.