The Wire Troll: Mike Muscala Coming Into His Own For Hawks 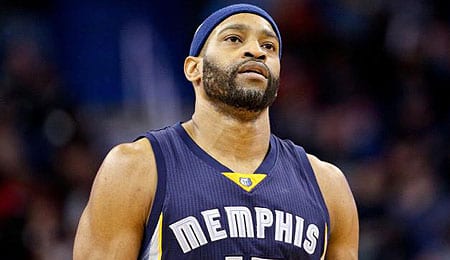 Apparently, Vince Carter is not yet ready for a rocking chair. (Somosnba.com)

Welcome back to another week of Fantasy basketball action. RotoRob.com NBA Editor Adrian Wallace is tied up this week, so the Troll duties fall to your trusty site editor.

This week, Draymond Green stood up for his teammate Kevin Durant while issuing a warning for Boston fans; Sacramento Kings Coach Dave Joerger has opted to go small, bad news for Kosta Koufas but good news for Darren Collison; and Cody Zeller smacked Dwight Howard in the elbow… with his face.

And now to this week’s Fantasy basketball waiver wire recommendations…

Vince Carter, SG, Memphis Grizzlies (ESPN: 11.3 per cent; CBS: 14 per cent): VC may be as old as dirt, but he’s still got some game, apparently. He’s been playing nearly 30 MPG over the last five, averaging a very serviceable 15.6 PPG. And on Monday, Carter made some history by scoring 20 points with seven boards off the bench. Over the last 40 years, the only other players 39 years or older to put up at least 20 and five off the bench are Patrick Ewing and Michael Jordan. That’s some good company. The last time Carter did this well from downtown, he was in Big D. He remains a force on the pick and roll (see video below) and before you know, Vinsanity will pass long-time (and long since retired) rival Allen Iverson on the all-time scoring list.

Matt Barnes, SG/SF, Sacramento Kings (ESPN: 9.3 per cent; CBS: 19 per cent): What is this, alumni week? All these old farts refusing to make way for the future… it’s crazy! Barnes, who will be 37 before the season is up, is another throwback player, posting back-to-back 15-point efforts in the last two games, with a combined six treys. Hell, he even added seven boards and two blocks on Friday in a pretty damn complete effort. As we mentioned up top, with the Kings going small, Barnes is one of the players who stands to benefit, so give him a long look as so far his homecoming (he’s a Sacramento native and played one season for the Kings before electricity was invented) is going extremely well even if he’s not seeing the same kind of minutes he did last season.

James Johnson, PF, Miami Heat (ESPN: 4.8 per cent; CBS: 7 per cent): It’s been a couple of years since Johnson was a Fantasy factor, but he’s getting extra PT with Justice Winslow (wrist) out. Johnson has seen 30 minutes of action in two of the last four games, responding with good enough performances to be worthy of addition in deeper formats. Last Saturday, he dropped 15 points (based on 6-of-7 shooting) on Utah and Thursday he just missed a double-double. Coming exclusively off the bench so far this season, Johnson is sinking more buckets than he did in Toronto last season and even showing a some sick ball handling skills.

P.J. Tucker, SF, Phoenix Suns (ESPN: 1.3 per cent; CBS: 3 per cent): The results have yet to be eye opening, but you can’t help but be intrigued by the extra minutes Tucker has received of late. Yes, he’s coming off the bench this season, so overall the minutes are down compared to last season, but recently, he’s seen an uptick. In three of the last four games, he’s flirted with a low-end double-double and with TJ Warren currently day-to-day, there is a chance Tucker gets the start against Philly Saturday, making him an intriguing DFS play at the very least.

Mike Muscala, C/PF, Atlanta Hawks (ESPN: 8.2 per cent; CBS: 22 per cent): About a year and a half ago, we recommend Muscala and it was a good call as he finished 2014-15 strong, shooting very well — even showing some outside touch. While last year was a disappointment, he’s coming into his own so far this season. Over the last three games, Muscala’s PT is on the rise, and he’s responded with at least 11 points, one trey and five boards in each contest, while adding a block in each of the last two. He’s sinking more buckets this season than he ever has, and if Superman gets a suspension for his flying elbows (see intro), Muscala will likely get another start, so pay attention to that for DFS purposes. But either way, in full season leagues, he deserves consideration in semi-deep formats (14 teams or more, say).

Justin Hamilton, Brooklyn Nets (ESPN: 5 per cent; CBS: 6 per cent): Hamilton’s season didn’t start well as he was kneed in the ‘nads by Jaylen Brown on Opening Night. Ouch. Still, it’s been a nice comeback from Hamilton as he played in Europe last season and now is getting some decent minutes mostly coming off the bench in Brooklyn. The season he spent abroad sure did wonders for his outside game as he never showed anything like this (43.5 per cent from beyond the arc) in his previous two NBA seasons. Need a centre in a very deep league? Try Hamilton, who is just a Brook Lopez injury (ya, we know… that never happens) away from being extremely relevant in all formats.

A player that has been buried deep down on the bench, Fredette is finally getting some playing time in New Orleans thanks to the Austin Rivers trade. We wouldn’t quite pick Fredette up yet unless you’re desperate, however he is worth keeping an eye on. We all know he can score as he had 13 points (while dropping five dimes) in limited minutes on Friday.

The Pistons are playing well, and so is Augustin, with a 26-point game, a 19-point game and a double-double all within his last six games. It’s looking like he could start to be a plug and play matchup option.