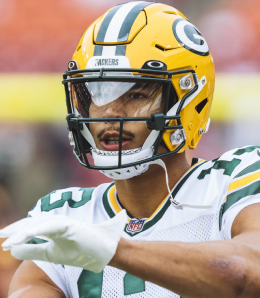 As expected, Allen Lazard is having a career year. (All-Pro Reels)

Heading into Week Nine, the Green Bay Packers had a golden opportunity to snap their skid playing a Detroit Lions’ squad that was enduring an even worse run than Green Bay’s four straight losses.

But the Packers’ offense could not capitalize on its chances on Sunday. Green Bay has really struggled on third downs all season, yet on a day when it converted 8-of-15, it still only managed to put up nine points in suffering its fifth straight loss, 15-9. How bizarre is it to see this team without a top 10 offense?

Suddenly, Green Bay is just 3-6 on the season, tied for second in the NFC North, miles behind archrival Minnesota. It’s going to take a major second half turnaround if this team hopes to avoid its first non-playoff campaign since 2018.

It’s hard to believe this team was a Super Bowl contender heading into the season, but its offense has been awful and the defense has also taken a step back — despite a very solid showing on Sunday. A fair question to ask is how much of the blame falls to quarterback Aaron Rodgers?

Last season, we thought it was noteworthy that he was held under 200 yards passing in Week Six, but it happened twice more before the season was over, and twice already in the first half of 2022. Perhaps we should get used to this?

While Rodgers’ overall performance slipped a bit last year, it’s fallen off a cliff this season with his worst completion rate since 2019, his lowest yards per attempt average since he became a full-timer and his worst-ever TD-to-interception ratio. In short, he’s never looked worse, and really bears no resemblance to a dude that has four MVP trophies on his resume.

While Rodgers did manage to put up 291 yards passing against Detroit, he only completed 53.5 per cent of his attempts (by far a season-low) and was picked three times for the first time since 2017. Yuck.

Sure, the loss of top wide receiver Davante Adams was bound to hurt, but this much? That’s a surprise. As strange as it sounds, Rodgers isn’t even a QB2 option in Week 10 against a much-improved Dallas pass defense.

With Adams gone, Rodgers has been forced to find a new go-to target, and while Allen Lazard has been his favourite receiver this season, it’s really been more of a committee approach as six different players have anywhere from 25 to 51 targets.

Lazard was someone we projected as a solid DFS option in the playoffs a couple of years ago, and he did wind up having a decent game in the NFC Championship. And after putting up a career-high 40 receptions on 60 targets last year, he’s on track to blow past those numbers this season with 30 on 51 already. Lazard, 27, will also shatter his personal best in touchdowns (he had a nice grab for the Packers’ only one on Sunday, see video below) and first downs. He’s likely a strong WR3 for Week 10.

The other good news for Fantasy owners is that running back Aaron Jones is enjoying his most efficient season. A dude we slotted inside the top 10 in our Running Back Rankings heading into 2021, he was a big disappointment last year, managing just 799 yards after back-to-back 1,000-yard campaigns. And worse yet, Jones’ touchdown count just kept dropping.

Unfortunately, that’s one trend that’s continued into this season as he’s mustered just one freaking score on the ground so far, but with 600 yards rushing already, plus a career-best 5.6 YPC, Jones has definitely turned things around to an extent.

Do note, however, that he hurt his ankle against Detroit, and while X-rays were negative, we’ll know more this week based on his practice status. If Jones misses the Dallas game, AJ Dillon may get a chance to turn around what’s been another disappointing season. Consider whoever starts a decent RB2 for the week.

Green Bay comes home this week to host Dallas at Lambeau Field in what is shaping up as a must-win game. However, the Pack is a five-point ‘dog here according to Fanduel Odds, so the oddsmakers, at the very least, don’t believe this looks promising.

Formed out of the ashes of Joy Division, New Order is from Salford, England. Here’s yet another track from the 1994 London Records compilation (the best of) NewOrder, “Ruined in a Day,” which was also the second single from the 1993 album Republic.

And once again, this team is incredibly deep on both sides of the ball, ranking third in yards per game and tied for first (with the San Francisco 49ers) in yards allowed per game.

By RotoRob
Posted in FOOTBALL, Game Preview, RotoRob | Comments Off on Bills Poised to Stomp Steelers

By RotoRob
Posted in FOOTBALL, RotoRob, Team report | Comments Off on Who Will Be Toting the Pigskin for the Arizona Cardinals?