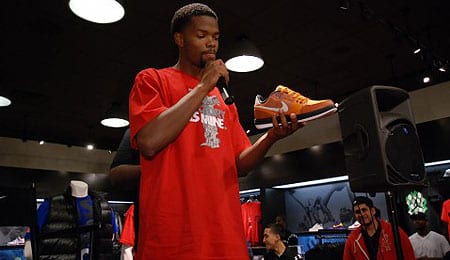 Aaron Brooks will need his best pair of shoes now that he’s joined the run-and-gun Suns.

Welcome to the Week 19 edition of the Wire Troll, our weekly look at players that may be available on your league waiver wire, but could see a spike in Fantasy value due to a variety of circumstances.

The NBA trade deadline has come and gone, and there were of course a few players that saw a significant spike in Fantasy worth, and several more whose value took a significant hit (see: “Brooks, Aaron” for more). We will of course have a look at the former group during this edition of the Troll.

True hoop-heads love this time of year, as the casual fans in your Fantasy league are busily scouring the baseball box scores trying to glean some meaning from games than mean nothing. Whilst they are away, the waiver wire line is a lot less crowded, and there are some fine bargains to be had for those still monitoring the hardwood. C’mon people, it’s Spring Training… the games don’t count, they… it’s… never mind, no one can say it better than The Answer.

Chris Kaman, Los Angeles Clippers: Kaman showed plenty of rust after his long hiatus from the lineup, but the big man is gradually working himself back into shape — and eroding DeAndre Jordan’s minutes in the process. Kaman posted 10 points, nine rebounds and two blocked shots on Friday, and could be a threat to move back into the starting lineup in the next few games. His skills on the offensive end elevate his game above Jordan’s, and the Clips definitely need help on that end of the floor. If Kaman is available in your league, he’s definitely worth adding; he should produce useful big-man stats even while playing in a reserve role.

Jason Thompson, Sacramento Kings: The trade of Cool Hand Carl Landry to New Orleans removed one log from the jam in Sac-town’s frontcourt, and the athletic Thompson has responded nicely to his increased run. Over his past three games (all as a starter), JT has averaged 13.3 points, eight boards and 1.3 blocked shots. Thompson’s maddening inconsistency suppresses his Fantasy value a bit, so he is best deployed in deeper leagues at this juncture. Keep an eye on this situation, though, as he still has some upside.

Chase Budinger, Houston Rockets: Perhaps no players realized a bigger Fantasy boost from the trade deadline dealings than Budinger, who should step into the starting job created by Shane Battier’s exodus from Houston. The second-year man showed us he was ready for the challenge on Wednesday, canning 30 points, grabbing eight boards and draining four treys in what turned out to be Battier’s last game as a member of the Rockets. We’ve seen flashes from Budinger, but this will be his first real opportunity to showcase his skills. Fantasy owners can expect roughly 15 points and 1.5 treys per night from Budinger in the near future, along with a fair numbers of rebounds and an odd assist or three. His shooting percentage isn’t the greatest, but his 9-for-18 line on Wednesday shows that the skills are there.

Kris Humphries, New Jersey Nets: Derrick Favors’s departure for Utah handed the starting power forward’s job back to Humphries, and he pretty much picked up where he left off — posting 12 points, six boards, two blocks and two steals on Friday. There is upside to that line: Humphries was averaging close to a double-double back when he was seeing starter’s minutes, and there’s no reason to believe he can’t yank down at least 10 boards per night going forward. Add Humphries if you need boards, or if you need a reason other than this to look in on the Nets’ home games.

Kirk Hinrich, Atlanta Hawks: Hinrich’s trade to the Hawks flew beneath the Fantasy radar on Deadline Day, but if he’s still available in your league, you need to stop reading this and go pick him up. Go ahead, I’ll wait. Now then, Hinrich will soon step in as the starting point guard in Hotlanta, with Jeff Teague as his only competition. The Troll isn’t worried about Teague, as he was unable to significantly cut into Mike Freaking Bibby’s minutes over the past two seasons. Hinrich averaged 11.4 points, 5.3 assists and 1.3 steals as a starter for the Wizards this season, and he could easily bump that stat line up to 12 and 6 as a member of the Hawks. He has averaged 1.5 treys per night over the course of his career, so there is reason to believe that his current 0.9 threes per night will also improve.

Willie Green, New Orleans Hornets: Green has played very well since moving back into the starting lineup February 9, averaging 15.9 points and 2.6 treys over that eight-game span. He won’t provide much else in the way of Fantasy production, but Green should continue to see plenty of burn now that Marcus Thornton has headed west to Sacramento. If you need points and treys, consider adding Green in deeper leagues.