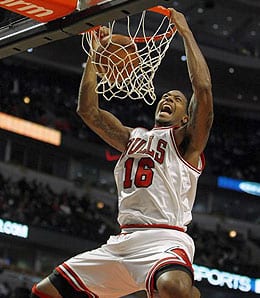 Rookie James Johnson was one of many Bulls that had to overcome injuries this season.

Their prize? A seven-game series against the NBA’s best team – the Cleveland Cavaliers.

Still, before we completely write the Bulls off, it’s worth noting that they actually split their four games against the Cavs this season. The two losses the Bulls suffered to Cleveland were by a combined 21 points, while the two wins were by a combined two points, including a crucial win last Thursday, part of a 6-2 April that helped the Bulls sew up their fifth playoff appearance in the past six years.

More impressive is what the Bulls overcame to punch their playoff ticket: a horrific start that saw the team sitting at 10-17 heading into the Christmas break; a 10-game skid from the end of February to mid-March, dropping them back to six games under .500 after they had turned things around with a 10-5 January; and literal in-fighting among team management (hint: when your coach and GM and nearly coming to blows, all’s not well).

And then there’s the litany of injuries this team had to deal with: Derrick Rose missed a few games with a wrist injury, but early in the season he was saddled with an ankle injury, and took quite a while before he found his groove; Luol Deng missed 11 games with a calf injury; Kirk Hinrich missed six games with a thumb woe; Joakim Noah missed 18 games with plantar fasciitis, and remained limited for a couple of weeks upon his return; Tyrus Thomas missed six weeks with a broken forearm before getting dispatched to Charlotte; rookie James Johnson also missed time with plantar fascittis; and Aaron Gray missed the first month of the season before getting dealt away in late-January.

Despite it all, the Bulls managed to fight through adversity and record their second straight .500 season. Assuming they had been healthier, Chicago might have been slugging it out with Miami and Milwaukee for the five and six seeds instead of going down to the wire just to make it to the postseason.

Noah, the team’s emotional centrepiece, was definitely on his game Wednesday, racking up 21 points on 7-for-11 from the field and 7-for-9 from the line with 13 boards and four assists. We could do without the five turnovers, but you’ve to love how Noah stepped up down the stretch, averaging 16.2 points, 14.4 rebounds, 3.6 assists and 2.6 blocks per game over the final five games. Clearly, he had put his injury issues behind him, as April was his most productive month as he put up 13.8 points, 13.4 boards, 3.5 assists and 2.1 blocks with just 1.6 turnovers per night. He just continues to improve as an NBA player, and has already exceeded my expectations in his third season. If he can avoid major injury next season, Noah will be able to log closer to 35 MPG and will be a double-double machine.

Noah’s backup Brad Miller also was a factor Wednesday, contributing 11 points, seven boards, a 3-pointer and a steal with no turnovers. Miller also finished the season strong, averaging 12.6 points, 5.8 boards, 2.4 assists, 0.8 blocks, 0.6 steals and 0.6 treys over the final five games – very impressive considering he only played eight minutes in the pivotal win over Toronto on Sunday. After some nice burn in March, Miller’s PT obviously dipped as Noah got healthier and more effective, and the veteran big man’s overall value took a serious hit this year, especially since he struggled through the worst shooting season of his career.

Rose came up big Wednesday, canning 10-of-19 from the field and 5-of-6 from the line for 27 points. He didn’t do much in the way of rebounding or dropping dimes, but the soph star came through in areas he normally doesn’t contribute with two treys – including a big one with just under nine minutes to play that put Chicago up 16 and was likely the dagger blow of the evening – and two steals and a block. He was an absolute machine in crunch time, averaging 28.2 PPG (on 56 per cent shooting) with 7.0 APG, 4.0 RPG, 1.0 BPG, 0.8 SPG and 0.6 3-pointers over the final five to cap a huge April.

Over the final month, Rose put up 25.4 PPG, 7.0 APG and 4.1 RPG, while shooting 54 per cent from the field and 77.6 per cent from the line. Steals remain a weakness (in fact, his numbers were down 0.1 SPG this season), although he pitched in with a few more blocks while substantially upping his scoring numbers and again averaging at least six dimes per game. Rose hinted at some 3-point potential over the final couple months, but until this area of his game develops more significantly, he’s going to be unable to become an elite Fantasy point guard.

Taj Gibson capped a pretty solid rookie season with his 18th double-double Wednesday. He saw more action in April, responding with some fine rebounding numbers, although his scoring remains inconsistent. Still, we saw enough this year to be pretty bullish on his potential. An undersized PF (6’9”) that can accumulate the kind of rebounding and block numbers Gibson put up is a pretty impressive feat.