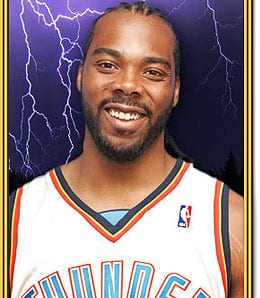 Chris Wilcox may have a hell of a lot more to time about in Mike D’Antoni’s system.

Chris Wilcox, New York Knicks: After originally being included in the deal for New Orleans’ Tyson Chandler, Wilcox eventually ended up in the Big Apple. It’s debatable if Wilcox would’ve been better off on the receiving end of pick and rolls from Chris Paul rather than playing in Mike D’Antoni’s offense from a fantasy perspective, but his potential is interesting at the very least. Those in deep leagues need to add him right away while those in shallower formats should put him on their watch lists.

With Greg Oden banged up, Joel Przybilla has been a monster on the glass, hauling in 44 rebounds in his last four games. However, outside of some sporadic blocks, he won’t be much of a help elsewhere…Andray Blatche is back after a nine-game absence, though his minutes have been fairly low in three games since returning. He really looked like he was piecing things together before the injury and would be worth a flier in deeper leagues.

Antonio McDyess, Detroit Pistons: Things may be coming apart at the seams in the Motor City, but that certainly isn’t the fault of McDyess, who is playing some inspired basketball. The veteran moved into the starting lineup two games ago and has responded with 37 points and 27 rebounds in that time. His work on the boards should be enough to earn him a spot in most leagues, and his solid scoring and 52.7 per cent shooting from the field is just icing on the cake.

Thaddeus Young, Philadelphia 76ers: Inexplicably, Young remains available in numerous leagues despite averaging 13.6 points and 5.0 boards per night this season. He’s a capable three-point shooter and has an impressive 16 thefts in eight games this month. Young is worth owning in all leagues.

Vladimir Radmanovic, Charlotte Bobcats: Things continue to go pretty smoothly for Radmanovic in Charlotte as the 6-foot-10 perimeter threat has racked up 66 points (including 13 three-pointers) in five games since joining the Bobcats. His rebounding numbers have even bordered on respectable – well, at least for a featherweight on the glass like Vlad. Take a chance on him if you’re looking for a bump in scoring.

Ricky Davis has started the Clippers’ last three games and even though the results haven’t been jaw dropping (26 points, 12 assists combined in the three contests) his scoring acumen is well known. View him as a flier in deeper leagues…In Boston’s first game without Kevin Garnett it was Brian Scalabrine that got the starting nod, logging 37 minutes and dropping 14 points on the Suns. He could have some short-term value for clubs desperate for scoring help…He’s still hit or miss at this point, but Marreese Speights has authored five double-digit scoring performances in his last seven games. The downside is he failed to score in the other two…Shane Battier’s minutes should be secure now that Tracy McGrady is unlikely to return in 2009, which is the good news. The bad news is that Battier is only averaging 7.3 points and 5.0 rebounds in seven February games despite logging nearly 33 minutes a night. He’s only an option in deep leagues…Could the words Thabo Sefolosha and fantasy basketball actually be uttered in the same sentence following his trade to Oklahoma City? Stay tuned.

Aaron Brooks, Houston Rockets: Houston’s decision to ship “Skip to my Lou” off to Orlando moves Brooks into the starting lineup for the rest of the season. The diminutive point guard celebrated with a 19-point, eight-assist and six-rebound effort in his first start of the post-Rafer Alston era on Friday. He has flashed some serious potential at times this year and now with steady run in his future he should be acquired in all formats.

Roger Mason, San Antonio Spurs: The frailty of Manu Ginobili should provide a windfall of fantasy value for Mason, who averaged 15.1 points and 4.1 rebounds per game in November when Ginobili played in only four games. Mason has dropped 20 or more in two of the three games since Manu went down, and he is an absolute beast from beyond the arc. He should be a great temporary add in most leagues.

We at The Troll have been high on Francisco Garcia for some time now, but the dealing of John Salmons should open up more playing time for Garcia and give him additional value. Act now before a rival owner scoops up the 27-year-old swingman…The Kings also tried to move Beno Udrih but were unsuccessful; perhaps that was a blessing in disguise as he has reached double figures in six consecutive games. Consistency and Udrih don’t go hand in hand, so only make a move if you’re looking for short-term assistance…Marquis Daniels dropped 24 points on the T-Wolves in his first start since Januar 5. He’s a legitimate option with both Danny Granger and Mike Dunleavy Jr. out of action…Larry Hughes’ absurd contract (along with Hughes himself) was shipped to New York before the trade deadline. Now normally this would be a non-issue, but with D’Antoni calling the shots up there anything is possible, even a Hughes renaissance…On the injury front, Luke Ridnour and Steve Blake both returned to action this past week. Owners should take note…Mike Miller has started Minnesota’s last four games, amassing 55 points, 28 rebounds and 25 assists during that stretch. Optimistic owners can act now, others can wait and see if Miller can sustain his strong play – just don’t wait too long…One last name to consider: Jarrett Jack. He has 69 points in his last four games and has been playing a ton of minutes recently with Indy missing three starters.

What a shock… Larry Hughes is hurt again. This is a good time for basketball fans as the NBA is ending its first month of the schedule and things are starting to happen. Tracy McGrady, Vince Carter and Larry Hughes are hurt (as if anyone still owns Hughes); Stephon Starbury isn’t happy, and Shaq sucks […]