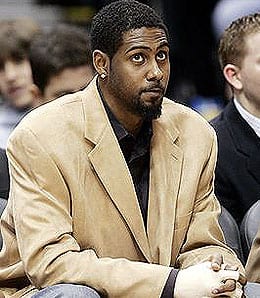 Larry Hughes has spent plenty of time on the sidelines in the past couple of years, but he’s healthy now and thriving in a Knick uni.

We are about to enter the home stretch of the NBA regular season, which means that some teams may start changing their philosophies about how they are approaching the balance of games. Teams on the outside of the playoff hunt will start to play their younger players more, and teams fighting for a playoff spot may shorten their rotation or lean heavier on their stars. This could result in a slight shift of production around the league.

Let’s take a look at some hidden studs for the last two weeks. These are some guys who are over performing, or are just getting a chance to produce.

1. Troy Murphy, F, Indiana Pacers: Over the last 14 days, Murphy is averaging 17 points, 12.5 boards, 0.83 blocks, two assists, and a steal each game. He has also drained 20 three balls in this six-game stretch. These numbers put him in the top 10 at all positions in fantasy production the last two weeks. As good as Murphy was during his double-double years as a Warrior, he’s having by far the finest season of his career, so kudos to those of you who snagged him with a mid-round pick.

2. Larry Hughes, G, New York Knicks: Over the last seven games, Hughes has averaged over 19 points, nearly 3.5 rebounds and over three assists, while dropping in 15 money balls. Hughes, who is getting about 38 minutes of run over this stretch, is finally getting consistent playing time, proving he can play in Mike D’Antoni’s system. If Hughes hasn’t been plucked off your waiver wire, you better do so pronto.

3. Marc Gasol, C, Memphis Grizzlies: The younger Gasol is having a great rookie year and he will be one to really watch over the next two seasons or so. I think eventually he could be an All-Star centre. He has the pedigree, size, and skills to do so. Over the last eight games, he has averaged 16 points and nine rebounds to go with his 3.5 assists and 1.88 blocks a game. Gasol is a solid free throw shooter (82 per cent over his last eight games) and his field goal percentage is nearly 60 over this stretch.

4. Mario Chalmers, G, Miami Heat: After hitting a little bit of a rookie wall a few weeks back, Chalmers is back to filling the statbook. Over his last seven contests, he is averaging 12.5 points, 4.5 assists, three rebounds, and over two steals a game. He can also hit the three (and in fact, is launching up a hell of a lot of them lately), which is just an added bonus. Not many people would consider the former Jayhawk a top 30 fantasy player, but he has been one over the last two weeks.

5. Jason Terry, G, Dallas Mavericks: I had doubts about Jet making such a successful comeback from a hand injury. He has picked up right where he left off, which is the reason he’s on this list. Over his last seven games, Terry is averaging over 22 points a game while canning 20 3-pointer. If you throw in a couple assists, steals, and boards a game, you have yourself a nice asset — an asset I personally traded away for Mike Conley after the injury to Terry. I thought he wouldn’t be back until late March, but he returned faster than expected. For those who held on to him, it is paying dividends now.

Some quick news and notes:

By Alex Hardin
Posted in Alex Hardin, BASKETBALL, The Hidden Truth | No Comments »