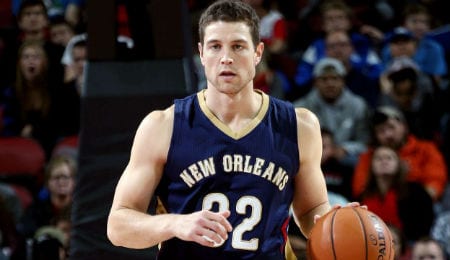 Jimmer Fredette is finally getting his chance in the Big Easy. (Sportal.com.au)

The Hawks continue to be unstoppable, Austin Rivers is going to play for his dad, and the Cleveland Cavaliers are battling to stay at .500. Every contender in the West except the Spurs has made a trade to improve their chances. This is why we love the NBA. It is so unpredictable and fun to watch.

Patty Mills, PG, San Antonio Spurs (ESPN: 3.5 per cent; CBS: 11 per cent): We slotted Mills 39th in our Point Guard Rankings, but he hasn’t come close to living up to that as he didn’t return from offseason shoulder surgery until late December. However, now that he’s been back 10 games, he’s starting to find his groove. Since the start of January, Mills is averaging 13 points and over two three-pointers. On Friday, he showed what a weapon he can be, pouring in 18 points in just 22 minutes (see video below) as the Spurs started to resemble a championship team at last. If you are in need of scoring, Mills is a solid if not a sexy pick up.

Jimmer Fredette, PG, New Orleans Pelicans (ESPN: 0.2 per cent; CBS: 1 per cent): A player that has been buried deep down on the bench, Fredette is finally getting some playing time in New Orleans thanks to the Austin Rivers trade. We wouldn’t quite pick Fredette up yet unless you’re desperate, however he is worth keeping an eye on. We all know he can score as he had 13 points (while dropping five dimes) in limited minutes on Friday.

Jae Crowder, SF/PF, Boston Celtics (ESPN: 4.4 per cent; CBS: 29 per cent): Known as a hustle player, Crowder is starting to fit into his new home in Boston. He had 22 points, two three-pointers, four steals and two blocks on Monday in 36 minutes. The former Marquette star earned praise from another ex-Golden Eagle as Jimmy Butler was gushing over Crowder after the Bulls beat the Celtics on Friday.

Paul George, SG/SF, Indiana Pacers (ESPN: 3.6 per cent; CBS 38 per cent): At this point in the season you should know where your team stands. If you have an IR spot, then George needs to be owned in all leagues, If you don’t have an IR slot, but you feel like a contender then he may be worth a pickup. While we still don’t know if George is going to play this season, the way he could push your team to a title is worth the risk. The Indiana Pacers’ Twitter account released a Vine of him dunking on Wednesday and with the Pacers only 2.5 games back of a playoff spot in the East, our gut is telling us George will return to game action this season.

Brandan Wright, PF/C, Phoenix Suns, (ESPN: 4.4 per cent; CBS: 21 per cent): A Wire Troll recommendation back in late November, Wright has earned a second nod as he’s starting to earn more minutes with the Suns and produce (11 points in 20 minutes on Friday). Phoenix should be a good fit for him and could lead to more PT opportunities. This is a low risk pickup but could prove to be beneficial — especially in deeper leagues.

Ian Mahinmi, Indiana Pacers (ESPN: 0.1 per cent; CBS: unowned): This is a deep league option only, and another centre back for a second recommendation. We pimped Mahinmi in late-November as he was starting to sink more buckets, but a foot injury cost him most of December, sucking the Fantasy value from his game. Well, he’s back now, and judging by Friday (12 points and nine boards in 27 minutes with a block and a steal), is ready to make a bit of noise again. Mahinmi is playing some strong b-ball off the Pacer bench, so give him a look in leagues of 16 or more teams.