Does Artest Improve the Lakers? 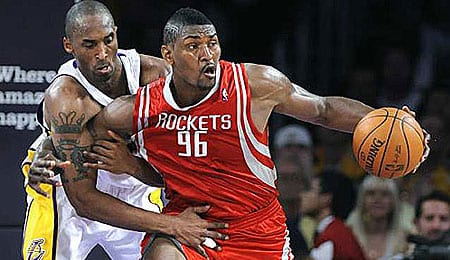 Here’s your evidence that Kobe is capable of playing with Ron Artest as he performs a reach around to sample his “good buddy’s” wares. (Wally Skalij/Los Angeles Times)

So, after winning their 15th NBA Championship, what are the Los Angeles Lakers going to do for an encore?

Unlike the Young Disciples’ tune “Apparently Nothing,” the Lakers have plenty planned.

For starters, superstar Kobe Bryant will not opt out of the final two years of his contract, so the fact that he’ll remain with the Lakers is a huge relief for all involved. Although Kobe struggled with his shot in the Finals, he was canning his treys and did a pretty good job of pitching in across the board, while still averaging over 30 PPG. Bryant’s overall production has been in decline for three years running now, and while the soon-to-be 31-year-old easily remains a top five Fantasy pick, his days of putting up 30 per night over the course of 82 games are probably gone – especially on this current Laker squad, with myriad scoring options.

Okay, so we didn’t get the much-anticipated LeBron James vs. Kobe Bryant matchup in the Finals, but that doesn’t mean that Bryant wasn’t under serious pressure to come through and lead the Lakers to their first title since 2002 – and Kobe’s first without Shaquille O’Neal.

Coach Phil Jackson, with his fourth title as the Lakers’ head man to go along with the half dozen he bagged in Chicago, is now the only coach in NBA history to be able to wear a Championship ring on every finger on both hands. In fact, I’d like to see Jackson do that, and look something like the male version of this.

Meanwhile, it became clear the Lakers were going to have a new small forward next season when they wooed Ron Artest away from the Rockets. Almost immediately after that deal was announced, Trevor Ariza made a verbal commitment to sign with Houston. So are the Lakers better off with Ron-Ron over Ariza at the three? On the surface, there’s no question who the more accomplished player is, although Ariza’s upside is fascinating. However, not everyone is thrilled with this deal. LA Times columnist Bill Plaschke slammed the Lakers for not spending more time trying to re-sign Ariza instead of going after Artest. He writes:

“They just won a title that would not have been possible without the strong defense and stunning shooting of a 24-year-old kid with a limitless ceiling. Yet they send the kid packing for an aging nut whose greatest hits have occurred on the heads of fans.”

While Plaschke admits that Artest is the better player, he’s concerned about how this move will affect team chemisty – and that’s a valid point worth exploring.

From a Fantasy standpoint, however, Ariza goes flying up the charts – with Yao Ming out and with Tracy McGrady a huge question mark for Houston, Ariza should be poised for a major breakout. As valuable as he was for the Lakers in the playoffs, Ariza could take a primary scoring role in Houston. I’d be keeping my eye on this kid as a potential Most Improved Player in 2009-10 and if you’re looking for a serious sleeper, look no further. Given starter minutes, I could see him being a 15-16 point man with a high shooting percentage, six to seven boards, maybe 1.5 treys per game and a steals total that will be among the best in the NBA.

Houston is suddenly a much younger, and clearly rebuilding team – remember that they dealt away Rafer Alston at the deadline and handed the offense to youngster Aaron Brooks — and Ariza is at the centre of this youth movement. Apparently, Ariza took less money from Houston than another team – believed to be the Raptors – offered.

In Artest, the Lakers get an extremely talented and tough player – but also an incredibly unpredictable one. He’ll be 30 years old shortly after next season starts, and has had some serious problems staying healthy throughout his career, especially this past season when he limped through huge chunks of the year on a bad ankle. Artest is taking a cut in pay to join LA, but he seems fine with this given that he’ll have a chance to get a ring – something that clearly wasn’t going to happen in Houston after the Yao injury.

It will be interesting to watch the chemistry between Artest and Bryant – two players who, despite claims they are great buddies off the court, have had a bit of history of on-court animosity – much of it recent after an episode in the playoffs this spring.

Artest is another player who racks up the steals (although he averaged a career low 1.5 last season), but I can’t see a scenario where his Fantasy numbers don’t suffer as a Laker. Even if he’s 100 per cent healthy, I don’t see Artest getting back to his 40 MPG days like in Indy and Sacramento, and that will obviously affect his production. His touches were down in Houston, so what will they be like for the Lakers with Kobe, Pau Gasol, Andrew Bynum and Derek Fisher all needing the rock? And that’s not even factoring in free agent Lamar Odom, who may still re-sign with the Lakers.

Speaking of Gasol, he was a stud in the playoffs, handling even heavier minutes than he did in the regular season, when he proved he was over the injury woes of the past two seasons. He enjoyed a very strong campaign, and probably worked his way into mid-third round value for your upcoming draft this fall. However, a word of caution: there’s already been plenty of moaning of the lack of Gasol touches – why don’t the Lakers run the offense through the big man more? But with Artest aboard, this could become a much more serious issue, because unlike Ariza, who was perfectly okay to accept the limited shot attempts he got, an All-Star of Artest’s calibre is unlikely to be so unselfish. This is part of that chemistry issue that Plaschke is justifiably worried about, and it’s something that definitely bears watching – especially by Gasol owners.

Ron Artest, right, probably won’t be driving past any opponents in the near future after yesterday’s arrest on a domestic abuse charge. You know, when you dissed Mike Bibby because of his D, we weren’t really bothered by it; when you demanded a trade, we didn’t mind, because at least you kept playing. Damn, even […]