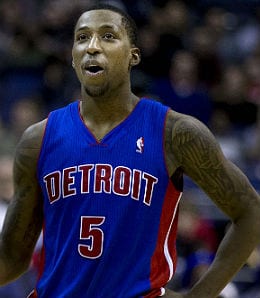 Welcome back to another week of Fantasy basketball! This week, Joakim Noah gushed over Anthony Davis; LeBron James proved he can still manifest his destiny in a big comeback win over the Magic; and James Harden found playing with Josh Smith a cinch as the Rockets helped maintain the Grizzlies’ current struggling ways.

Kentavious Caldwell-Pope, SG, Detroit Pistons (ESPN: 10.1 per cent; CBS: 50 per cent): We recommended Caldwell-Pope six weeks ago, and he justified our faith with a nice increase in scoring last month, although he hasn’t shot as well from downtown in December. Still, in the wake of Josh Smith’s release, Detroit has started to give KCP more minutes and the kid is taking advantage. Caldwell-Pope has really solidified his hold on the starting two-guard spot lately with four straight games of at least 14 points in which he’s canned a total of 14 three-pointers, so if you need help in treys, here’s your man. He had a team-high 20 points on Sunday (see video below), earning himself a team-high 34 minutes Friday in which he contributed another 15 points. Last year’s eighth overall pick is breaking out, so grab him while you can.

Courtney Lee, SG, Memphis Grizzlies (ESPN: 25.8 per cent; CBS: 41 per cent): After his big start to the season, we recommended Lee last month, and it was a solid pick, and he jacked up more treys and hit a huge buzzer beater last month, but hasn’t been getting as many touches this month. Still, we’re pimping him again based on some massive minutes lately (39 MPG in the last two). The results haven’t necessarily been there (although he did drop five dimes Friday), but if Lee keeps getting this kind of PT, he’ll start earning kudos for his offense as well as his defense.

Jon Leuer, PF, Memphis Grizzlies (ESPN: 0.4 per cent; CBS: 2 per cent): Just over a year ago, we recommended Leuer, and it was a good call, because his PT really rose in December. Unfortunately, he was not able to carry that forward for the remainder of the season. Well, now that Zach Randolph (knee) is out, Leuer is getting a chance to start. At times, he’s flashed great hustle, but he’s been battling with Kosta Koufos for Z-Bo’s minutes. Leuer showed promise last weekend, with 16 points, seven boards and two steals in 30 minutes against the Cavs and while he’s slipped since, he’s capable of stepping up big as long as Randolph is out.

Solomon Hill, SF, Indiana Pacers (ESPN: 8.5 per cent; CBS: 50 per cent): We had Hill 37th in our Small Forward Rankings, and he’s likely been slightly better than that ranking so far. However, other than a big game winning shot against the Hornets and a career game against Washington (a team prone to giving up huge games to little known players) last month, he really hasn’t had that big an impact. Quietly, Hill has become a Fantasy worthy option of late, thanks to an uptick in PT because of C.J. Miles’ illness. Scoring is not really his thang, yet he has reached double digits in four of the last five games. But Hill’s ability to pitch in a bit in treys, boards, assists and steals makes him a player worth considering. Used almost exclusively as a starter this year, he’s seeing enough PT to put up some decent Fantasy numbers.

Alex Len, Phoenix Suns (ESPN: 3.4 per cent; CBS: 23 per cent): We slotted Len 28th in our preseason Centre Rankings, but he hasn’t quite lived up to that yet. Things are changing lately, however, as the Suns tried to mix things up last week by shifting Len into the starting lineup over Miles Plumlee. Len’s minutes are now creeping up and the results are showing as he put together his third double-double of the season (tying a career high with 11 boards) and swatted a career-best five shots Friday. The former Terps’ star is finally starting to deliver on his status as the fifth overall pick last year.

Ed Davis, C/PF, Los Angeles Lakers (ESPN: 13.9 per cent; CBS: 50 per cent): We ranked Davis 36th in our preseason Centre Rankings, and he’s been playing at almost exactly that level so far. But a couple of weeks ago, he got a big boost when Head Coach Byron Scott opted to bench Carlos Boozer and move Davis into the starting lineup. Since then, Davis has picked things up with five straight double-digit scoring games and his first two double-doubles of the season in the last two. He’s even blocking more shots, with a half dozen over the last three games combined. Davis has stayed healthy en route to what’s been a career season so far. He’ll provide Fantasy owners with a superb FG percentage as well (62.2 per cent).