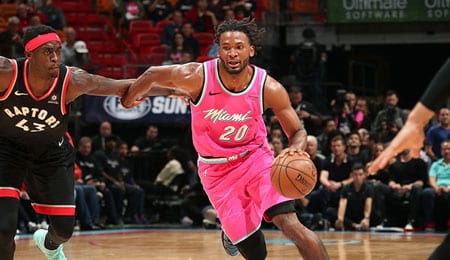 Just 20 years old, Allen established himself as a building block in Brooklyn with a strong rookie campaign. He only played 20 minutes per game, but his PT kept rising as the season progressed, as did his touches. Allen did a good job of getting to the line and showed nice potential on the offensive glass. Best of all, his 58.9 per cent field goal accuracy ranked second among all rookies that played at least 30 games. Allen should be a big-time sleeper heading into 2018-19.

How to Dominate Your NBA Fantasy Playoffs

The standard league semis are about to hit, followed by the finals run. Now is the time for NBA Fantasy fans to get their teams in order and plan ahead for success in the postseason. There are some hot picks and NBA Fantasy sleepers we’ll be looking at to help fans maximize their gains on the latest statistics. With the right approach, it promises to be a great year for NBA Fantasy action.

By David Weinger
Tags: NBA
Posted in BASKETBALL, David Weinger, Strategy | Comments Off on How to Dominate Your NBA Fantasy Playoffs