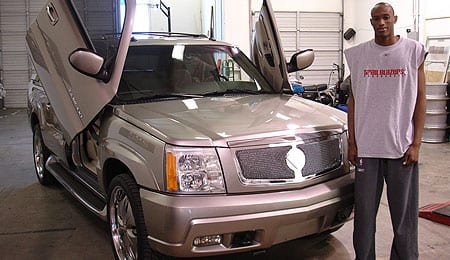 Travis Outlaw has driven owners crazy with his inconsistency, but perhaps he’s finally turned the corner.

With Buck out of action this week, RotoRob takes over the controls of The Wire Troll. Let’s dispense with a lengthy intro and get right to our Fantasy basketball waiver wire picks of the week.

Nazr Mohammed, Charlotte Bobcats: The man with the friendliest first name in the NBA (pronounced Na-Zee), has seen inconsistent PT, but when he’s gotten burn, the Bobcats’ starting centre has produced. Friday night, he enjoyed his second double-double of the season with 14 points and 11 boards while adding a pair of blocks in 28 minutes. It’s worth noting that this was the most minutes he’s played since his 22-point, 20-board blow up three weeks ago, so clearly Mohammed is no one’s idea of a Fantasy stud. But he will occasionally produce, making him a decent low-level option and one that is almost certainly available.

Mehmet Okur, Utah Jazz: Okur, who has been out all season while recovering from surgery on his Achilles’ heel, is making progress. The heel is reportedly 100 per cent healthy, so now it’s just a matter of him getting into game shape. Okur’s exact return date is still unknown, but if you have the roster space, now’s a good time to get a jump on your competition and stash him. He’ll provide help in the usual big man stats – boards and blocks – but also help you in threes and FT percentage, two cats that you don’t normally associate as positives for a centre.

Travis Outlaw, New Jersey Nets: Outlaw has been horribly inconsistent this season, but for the first time all season, he’s scored double digits in at least three straight games, culminating in a 21-point effort on Friday during which he also added six boards, three steals, a block, an assist and a trey for a rare across-the-board line. Outlaw has started every game so far for the Nets, and while it would be nice to see him get to the line more often, his overall productivity has rebounded nicely after an offseason in 2009-10.

Marvin Williams, Atlanta Hawks: I drafted Williams this season, expecting him to thrive in Atlanta’s new motion offense, but he was inconsistent early on, so I dumped him. And then he got hurt, which probably sent him to the waiver wires in plenty of more leagues. Well, Williams is rolling now, tying his season high with a game-high 22 points on Friday night for his fourth straight game of at least 13 points. He’s been rebounding, getting steals and pitching in with the occasional three-pointer as well, but best of all, Williams looks like he’s taken a much more significant role in the offense now that Joe Johnson is out. Pick him up before anyone else in your league clues in that he’s one of the main beneficiaries of JJ’s injury.

Kirk Hinrich, Washington Wizards: It looked like Hinrich’s run was pretty much over with John Wall returning, but it has been Gilbert Arenas – not Hinrich – that’s gone to the bench with the return of Washington’s super rookie. Hinrich had been slumping lately, but has turned it on again in the past couple of games, so if you need some modest scoring, a few dimes, a trey per game, some steals and nice percentages, Captain Kirk could be useful. And he’s been dumped by plenty of owners that expected him to head back to the bench.

Thabo Sefolosha, Oklahoma City Thunder: Let’s get one thing clear: Thabo will rarely even reach double figures in scoring, but his ability to fill up the stat sheet in almost every category makes him intriguing as a low-level Fantasy option. On Friday, he only scored three points (yuck), but pulled down seven boards (pretty sweet for a guard!) and had six (!) steals while adding three assists. Sefolosha has averaged 7.0 RPG over the last five contests and has racked up 11 steals in the past three games. He’ll even chip in with odd three and block. Also worth noting, he’s averaging almost 40 MPG over the past five (a total that admittedly is slightly inflated by the 55 minutes he played in the triple OT game on Wednesday, but he’s still played at least 28 MPG in all of his last five).