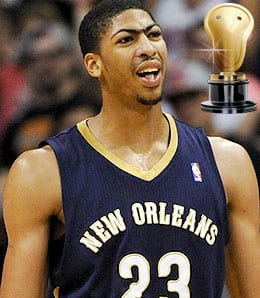 New Orleans Pelican power forward Anthony Davis just kept getting better throughout the 2013-14 campaign, culminating in 24 points and 11 rebounds per game in March. You saw that he could be a top player in this league… an MVP candidate. It was just a few years away, right? However, Davis continued to improve at an unbelievable rate, getting off to an amazing start in 2014-15, ranking fourth in the league in scoring, ninth in rebounding, and No. 1 in blocks. More telling, he is the league leader in Player Efficiency Rating (PER). If The Brow can keep it up, it will be only the 18th time (minimum 41 games) that a player had a PER of 30.2 and he’ll be only the eighth player to do so. This guy is singlehandedly keeping you in your Fantasy league. — MP 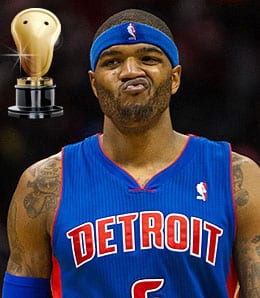 What?! There is no way a player can be the Fantasy Dud in back-to-back years, right? Well that’s how much of a bust Josh Smith has been. After getting off to a rough start in the 2013-14 campaign, his first season with the Pistons, he wore the goat horns as our Bust of the Year. It didn’t get any better for J-Smoov as the season went on. After all that, he ended up only playing three games in April, which didn’t help you in your championship in Head-to-Head leagues. (If you got that far it was despite Smith, not because of him.). Okay, it was a rough season, he was a dud, so you move on and don’t take him this season.

Well, then the Pistons hire big man specialist Stan Van Gundy who announces that Smith will move back to his natural position of power forward while Greg Monroe will come off the bench. Smith’s second season in Detroit could be a bounce back campaign, right? With this news, he starts going in the top 50 in most drafts, including as high as the third round in some leagues. However he is still Josh Smith and he begins the season by averaging only 13.1 points per game — by far the lowest of his career. He was shooting a lowly 22.5 per cent from downtown and 48.3 per cent from the free throw line. Great, now you have bad J-Smoov, but at least he is getting 32 minutes per game, right? Um check that. To top it all off he gets cut by the Pistons. If you still stuck with him it hopefully is a positive sign that he signed with Houston. Over a decade ago, AAU teammates Dwight Howard and Smith dreamed of playing in the NBA together. With that dream now a reality, we can only dream that Smith doesn’t Threepeat this distinction. — MP 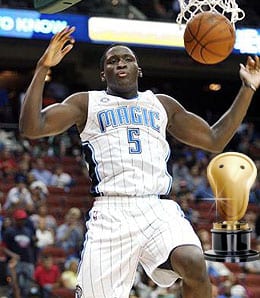 Victor Oladipo is a star in the making. (Orlandosentinel.com)

While last year we honoured Michael Carter-Williams, but this year he’s been surpassed by fellow 2013 draft pick Victor Oladipo of the Orlando Magic. The difference is simple? MCW has failed to build on the second half of his 2013-14 season in the first half of 2014-15 whereas Oladipo has taken a big step forward. And while Andrew Wiggins deserved consideration, Oladipo’s all-around play cinches the award. We’re a tad worried about Oladipo’s durability (he’s alreayd missed 11 games this season), but he’s also shown a real ability to bounce back quickly from minor injuries and put up huge games. We love the fact he’s sinking slightly more treys at the same time as accumulating more points from the line. Oladipo is potting 20 or more points in almost a third of his games so far this season. Yup. This is a stud in the making. — RR 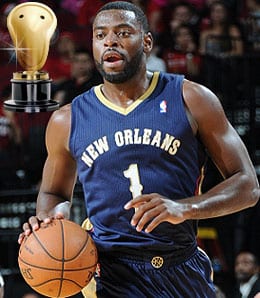 It’s been a long road for Tyreke Evans, whose career really spiralled downward after an amazing rookie season in which he became only the fourth first year-player to average 20 points, five assists and five rebounds per game. To put that in perspective, the other three were Hall of Famers Oscar Robertson and Michael Jordan and future Hall of Famer LeBron James. Now back to averaging almost 17 points per game and being a full time starter again, Evans has been able to open up his game, also contributing 5.5 boards and over five dimes per contest. He finally has some help for the first time in his career as with Jrue Holiday and MVP candidate Anthony Davis helping him out, it looks like things are only going to get better as the season progresses. Not only is Evans our comeback player of the year, but he is also a guy we’d recommend trying to land on your Fantasy team. — MP 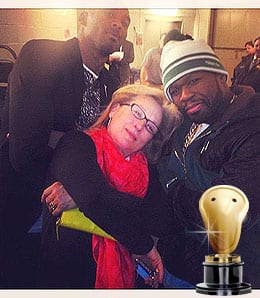 This is like the start of one of those “a priest, a rabbi and a goat go into a bar…” jokes. Simply replace the names above with Kobe Bryant, 50 Cent and Meryl Streep. What?! How in the hell does a trio like that hook up? In late-January, the Lakers visited Madison Square Garden in New York, and lo and behold, who should be sitting courtside beside each other but Streep and 50 Cent. After the game, they managed to find the injured Kobe and posed for the classic shot you see above. Wow, now there’s a MILF/BBC/MMF threesome scene you don’t see everyday. We could start a whole new craze here! — RR

Most Unlikely Poster of the Year 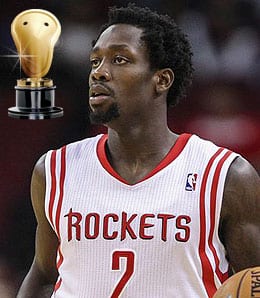 When LeBron James was with the Heat, it was usually him and his Superfriends that were spotted posterizing someone or other. So to see it happen to Miami is rare footage in the first place. But when offensively underwhelming PG Patrick Beverley of the Houston Rockets is the one distributing the posterization, it’s truly a sight worth capturing for… err… posterity. Watch as Beverley first crosses over LBJ to blow by the King, but then surges hard to the bucket and soars above Chris Bosh’s block attempt to completely posterize Bosh. Hell, the ball bounced off Bosh’s head for extra humiliation. — RR

Stealthiest Play of the Year 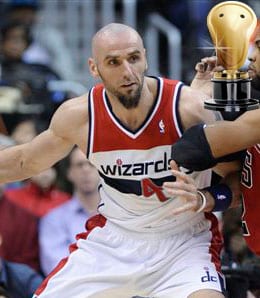 It’s not easy for a 6’11”, 240-pound man to be stealthy, but that’s exactly how Washington Wizards centre Marcin Gortat came across in April when he managed to sneak into the Celtics huddle and remain undetected — for a couple of seconds, anyway. It wasn’t bad enough that the Wizards were pummelling the Celtics by 17 points at the time — Gortat’s trickery rubbed salt in the wound. Hey, the big guy’s got a sense of humour at least! — RR

Intimidation Tactic of the Year 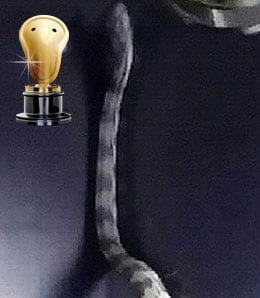 Thomas Robinson got his nice surprise in his locker. (Mo Williams Instagram)

Apparently, it wasn’t bad enough that the San Antonio Spurs kicked the crap out of the Portland Trail Blazers in Game One of the Western Conference Semifinals by 24 points. They wanted to put the fear of venomous snakes into the Blazers. And so it was that prior to Game Two, Portland forward Thomas Robinson discovered a small rattlesnake in his locker. Yikes!! Later, it was revealed that the serpent was not in fact a rattlesnake, but that didn’t necessarily put the Blazers at ease. No one ever figured out how that snake slithered into the locker, but apparently Spurs guard Danny Green is a huge snake aficionado. Just sayin’… — RR 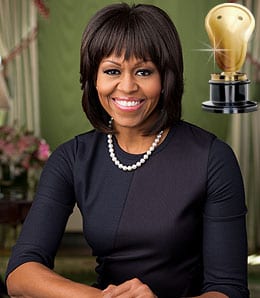 The First Lady of dunking. (en.wikipedia.org)

Usually this is reserved for a DeAndre Jordan or J.R. Smith rimrocker, but when First Lady Michelle Obama dunked on LeBron James as part of a healthy eating ad, it caught our eye. We all know Barack loves hoops, but apparently his wife has some mad skills, too. Hey, it can’t hurt her hubbie’s approval rating! — RR 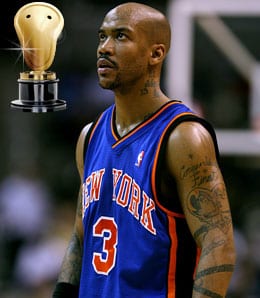 Former NBA player Stephon Marbury always did march to the beat of his own drum. Now, he dances to it, or at least he did in a musical entitled I am Stephon Marbury, which ran in the fall in Beijing and featured Starbury in the lead role. Based on his life story, the musical depicts Marbury fist-pumping a lot of people. We guess they are supposed to be his fans. It’s all very confusing. And it’s in Chinese, which doesn’t help shake off the absurdity surrounding the idea that a musical would be based on this dude. — RR

Now it’s your turn. Let us know in the comments below who you think deserved some basketball hardware in 2014.

Last season, Love’s touches bounced back and he sunk more treys than ever before, but his rebounding dipped. This season, his PT is down and his rebounding has really slipped, but he’s also found himself in more foul trouble. The loss of Varejao should translate into more minutes for Love, so the news is not all bad.