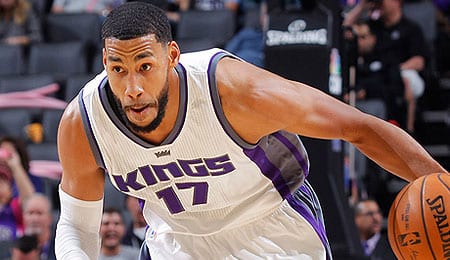 This week, Dirk Nowitzki is hoping to give the Mavs a Christmas gift with his return to action later this month; Allen Iverson got honoured with a Hall of Fame ceremony; and another man deserving of Hall of Fame recognition, NBA reporter Craig Sager, unfortunately passed away.

In the spirit of Sager’s colourful fashion and spirit, we hope to recommend waiver pickups to brighten your Fantasy winning chances…

Garrett Temple, SG, Sacramento Kings (ESPN: 1 per cent; CBS: 3 per cent): Temple has scored double-digits, dished out at least two assists and grabbed at least one steal in each of his last three games. He’s living up to his last name with such “holy” performances lately (check out his ungodly pass in the video below). Pick Temple up if you’re looking for a Fantasy blessing.

Gary Harris, SG, Denver Nuggets (ESPN: 21.4 per cent; CBS: 50 per cent): After a month-long absence because of a foot woe, Harris came back strong in a Thursday win over Portland with 18 points, four rebounds, six assists, two steals and a block. You would think he never left with a game like this, and that he would have already been picked up half way through reading this.

Marquese Chriss, PF, Phoenix Suns (ESPN: 2.6 per cent; CBS: 27 per cent): With Alex Len (hip) sidelined, rookie Chriss is stepping up to the plate. Chriss has been given up to 31 minutes, which allowed him to register a double-double in points and rebounds Thursday against the Spurs. If you’re looking for an opportunity with a widely available young forward, he’s your guy, just note that Len is scheduled to return Saturday, so you may want to see how Chriss’ PT is affected.

Larry Nance Jr., PF, Los Angeles Lakers (ESPN: 7.8 per cent; CBS: 21 per cent): Nance Jr. didn’t score a lot in his last appearance (four points), but he grabbed 11 rebounds while adding two blocks, a steal and an assist. This doesn’t just reflect his inability to score a ton, but also his versatility on the glass and around the statsheer. If you need a random guy to do random things on random nights, look up Nance Jr.

Timofey Mozgov, Los Angeles Lakers (ESPN: 13.4 per cent; CBS: 43 per cent): Mozgov has a lot of work to do before he starts seeing consistency in his performance to match his PT. However he still is an NBA champ, and double-doubles are never ignored here on the Troll. Mozgov got one Wednesday against the Nets (12 points, 13 boards). If that’s enough to entice you, and you’re in need of some help off the glass, give him a look.

Kosta Koufos, Sacramento Kings (ESPN: 1 per cent; CBS: 6 per cent): With Rudy Gay and Omri Casspi out, Koufas is rolling, reaching double-digit points in three straight games including a double-double with three blocks on Friday. Koufas had one of his best campaigns yet last season, spent mostly coming off the King bench. This season, he’s mostly starting and enjoying a better rebounding effort, so it’s nice to see him adding some scoring off late, too. And if DeMarcus Cousins gets a suspension for getting in the face of a local reporter, Koufos’ roll could go on for a a while longer.