The Wire Troll: Terrence Ross is a Perfect Holiday Gift 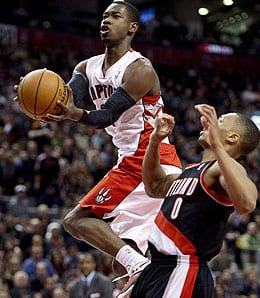 While last week’s Wire Troll featured several appealing NBA Fantasy additions, this week the task is a bit more challenging. Nonetheless, we present several players capable of helping your Fantasy basketball squad. You will also see us take a different approach when it comes to the centre position this week, so here we go.

Terrence Ross, SG, Toronto Raptors: Ross is a player you must pick up immediately and Merry Christmas to everyone that is fortunate enough to acquire him. The path to significant playing time for Ross was cleared this week with the trade of Rudy Gay to Sacramento. Ross, the Raps’ first rounder last year, is known for his scoring touch and he responded with 24 points on Friday (while the 2013 Slam Dunk Champ flashed some high-flying skills as you can see in the video below) and has eight treys in his two starts this week. If you need scoring, three-pointers and ample rebounds from the guard position, you may have hit the jackpot.

Alec Burks, SG, Utah Jazz: Trey Burke (finger) has returned to the starting point guard position for the Jazz, allowing Burks to move back to his natural shooting guard spot and provide “instant offense” off the bench. Burks has averaged 17 points, three rebounds in 2.5 assists over his last five games.

Jodie Meeks, SG, Los Angeles Lakers: Meeks and Wesley Johnson stand to benefit from a decimated Lakers backcourt with Steve Blake, Steve Nash and Jordan Farmar all sidelined. Fantasy owners, feel free to take advantage of this situation while the opportunity presents itself over the next few weeks. Reports suggest that Farmar may be the first to return but there is no timetable.

Al-Farouq Aminu, SF, New Orleans Pelicans: Aminu has taken advantage of the extra playing time and statistical opportunity presented by Anthony Davis’s broken wrist. Aminu has stepped up his game, averaging 11 points, 11.5 boards and one block since Davis got hurt. We wouldn’t suggest holding onto Aminu once the uni-browed star returns, but for now enjoy the rewards.

Amar’e Stoudemire, PF, New York Knicks: Oh, the ability, skill and results that Stoudemire flashed until his knees went faulty. The former Phoenix Suns All-Star has struggled to stay healthy and play productive minutes off the Knicks bench. Recently, however, he has been on a roll with several productive games (scoring, rebounds, blocks) and his minutes have increased. He even was able to make it through back-to-back games this week for the first time this season. By no means is Stat a sure thing going forward, but take advantage while the going is good.

P.J. Tucker, SF, Phoenix Suns: Tucker isn’t a consistent scoring threat, but he does contribute positively with rebounds, steals and three-pointers. Tucker has been playing consistent minutes at the small forward position because of his outstanding defense and can play a useful role in deep leagues.

Jon Leuer, PF, Memphis Grizzlies: Put Leuer among the top candidates for the NBA’s “Most Improved Player” award. The former Wisconsin standout has been terrific, averaging 17 points, eight boards and just over one steal per game over his last four. Leuer is another player that has come off the pine and made a significant contribution to his team.

The centres we are recommending this week all have one thing in common. They are all currently not contributing to their respective NBA teams because of injury or pending trade. We recommend them because they are under 50 per cent owned and can be solid contributors when healthy and experiencing the appropriate playing time.

Tyson Chandler, C, New York Knicks: Chandler (knee) has been working out and by all reports is close to a return. His double digit rebounding prowess and 2.5 blocks per game can benefit your squad.

Brandan Wright, C/PF, Dallas Mavericks: Wright’s return is imminent and he should see significant minutes because of the uninspiring play of Samuel Dalembert (some things never change) and DeJuan Blair. Like Chandler, Wright will contribute in boards and blocks.

Larry Sanders, C/PF, Milwaukee Bucks: The Bucks signed Sanders to a four-year, $44 million contract extension only to see him be injured in a bar fight. Sanders recently had a pin removed from his wounded hand and is progressing. He showed significant ability and potential last season (9.8 points, 9.5 rebounds, 2.8 blocks) and can return big dividends to your Fantasy squad when healthy.

Omer Asik, C, Houston Rockets: With the failed experiment of Dwight Howard and Asik playing together, there is no longer a meaningful role for Asik. As a result, the Rockets have suggested they will trade him within the next week. Last season, Omer was a double-double contributor to the Rockets after signing a lucrative free agent contract. He’s certainly a player to take a gamble on ASAP as this pending deal will set him free.

Now it’s your turn. Feel free to add your two cents regarding these players or others of interest in the comments section below.

By Bob Raymond
Tags: Terrence Ross
This entry was posted on Saturday, December 14th, 2013 at 5:10 pm and is filed under BASKETBALL, Bob Raymond, The Wire Troll. You can follow any responses to this entry through the RSS 2.0 feed. Both comments and pings are currently closed.