The Wire Troll: Latch onto Blatche 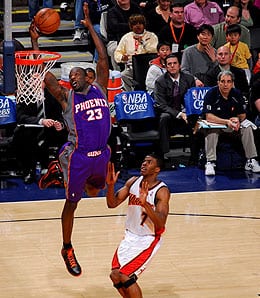 Jason Richardson will return from his suspension this week.

Welcome to a new season of The Wire Troll, NBA version, where we take a look at some productive players who, for one reason or another, might be languishing on your league’s waiver wire. Just as there’s no crying in baseball, languishing is not to be tolerated in the world of hoops…so we’ll seek to give you an early heads-up on some up-and-coming players who just might be ready for prime time duty on your Fantasy roster.

The NBA season is barely out of the starting gate, but already some patterns are beginning to emerge that may affect Fantasy rosters for at least the near future. Injuries and suspensions have claimed a couple of stars, leaving the door open for their replacements to rack up a bevy of Fantasy points. Meanwhile, a few rookies have stepped to the fore and served notice that the class of ’09 just might have as many pleasant surprises in store as their counterparts from a season ago.

The season is in its infancy, but acting upon these early indicators may allow you to get in on the ground floor of a budding Fantasy Cinderella story.

Weekly line-up leaguers take note: Orlando Magic forward Rashard Lewis will remain on league suspension for the entire week, while Suns’ two-guard Jason Richardson should be back in action following his two-game suspension.

On the injury front, Antawn Jamison and Kevin Love will not play this week, and keep an eye on the status of Pau Gasol (hamstring), Vince Carter (ankle), Rip Hamilton (ankle) and Mehmet Okur (knee/ankle). The news looks to be good for Charlotte guard Raja Bell (wrist), who may return this week. Fantasy owners in deeper leagues should have Bell on their radar.

Note that two other very high draft picks — Devin Harris and Caron Butler — are now out. Harris will miss Monday’s game, meaning another start for Rafer Alston, who put up a good line the other night. Butler, meanwhile, is expected to be back in action Tuesday night.

Andray Blatche, Washington Wizards: While Jamison is on the shelf – and that’s expected to be at least two more weeks – Blatche should see plenty of minutes. He made good on that run in his first game this season, posting 20 points, seven boards and two blocks against Dallas. While Jamison is out, Blatche should be on most Fantasy rosters. Even after ‘Tawn makes it back, Blatche will be the first big off the bench for the Wizards, and his rebounding and shot blocking ability make him a worthwhile roster addition in deep (180 or more rostered players) leagues.

Marc Gasol, Memphis Grizzlies: The arrivals of Zach Randolph and Hasheem Thabeet were supposed to cleave the Fantasy value of Gasol, but the big man apparently didn’t get that memo. He went off for 21 points, 15 boards and three blocks in his first game of the year, and looked every bit the part of a dominant big man. The jury’s still out on whether Gasol will be able to score on a consistent basis, but the boards and blocks figure to be there in any event.

Marreese Speights, Philadelphia 76ers: Speights may become the Sixers’ top big off the bench after tossing in a career-high 26 points in the opening game. Caution is advised, though, as he followed up that big night by playing only 12 minutes in his next game. The 6-foot-10 inch Speights is certainly a player to watch in all Fantasy formats, and may see his minutes increase if Elton Brand continues to struggle with picking up the “Princeton” offense. Speights is a good add in deeper leagues at this point, but be prepared to pull the trigger in all formats if he wins the job as sixth man in Philly.

Channing Frye, Phoenix Suns: Now that Frye has finally landed a starting gig, he’s definitely making the most of his time on the floor. He averaged 17 points, six boards and 3.5 trey balls through his first two games, and looks like a worthwhile add in just about every league. He’s not a shot blocker, but Frye’s quickness and ability to run the floor makes him an ideal fit in Phoenix’s up-tempo system. He should produce solid steal numbers as a result, and those treys are oh so sweet indeed. Friday night he looked absolutely sick, canning his first half dozen tries from beyond the arc before finally missing one.

Travis Outlaw/Martell Webster, Portland Trail Blazers: The shoulder injury to starting small forward Nicolas Batum, who’s out until at least January, has opened the door for both Outlaw and Webster. Outlaw tossed in 23 points, while grabbing four rebounds, dishing two assists and posting two steals and a block his first game, while Webster responded with 14/3/2/2/1 in eight fewer minutes. Outlaw may still be available in some leagues, while Webster is almost certainly hanging around out there somewhere. Don’t over-invest here, but recall that Webster put up decent numbers back in ’07-08 before missing all but one game last year due to injury.

DeJuan Blair, San Antonio Spurs: The rookie appears to have won the job as Tim Duncan’s backup in San Antonio, and that can translate to some very nice Fantasy lines for Blair when the Big Fundamental takes a night off. Blair also figures to rack up some solid minutes when the Spurs are involved in a blowout, and that nifty 14 points and 11 boards he posted in his NBA debut should show you that the talent is definitely there. Add Blair in deeper leagues, and Duncan owners should strongly consider rostering the rookie as well.

Ryan Anderson, Orlando Magic: Anderson also carries centre eligibility in some leagues, and his 16 points, four treys and five boards in the Magic’s opening game makes him add-worthy in some deeper leagues. Make your move now if you need his support, though – Anderson’s minutes should plummet after Lewis serves his 10-game suspension.

Yi Jianlian, New Jersey Nets: Yi is averaging 14.5 points and 8.5 rebounds with two blocks per game through his first two outings, and his potential makes him worth a dice roll in most league formats. He has been inconsistent to say the least during his career, though, so be prepared to cut bait if his fortunes head south.

Danilo Gallinari, New York Knicks: Gallinari looks to have rediscovered his shooting touch in the regular season, and can be of help to owners in need of threes. His health will always be a concern, but while he’s dialed in he’s worth a look for Fantasy owners in larger leagues.

Shelden Williams, Boston Celtics: Those same deep league owners should keep an eye on Williams; the Celts figure to be on the good end of a lot of blowouts this season, and Williams looks to be in line to rack up plenty of garbage time minutes. It may not be quality time, but Fantasy owners won’t complain about the 12 points, nine rebounds, three assists and a block he posted during one rout, nor the 10/10/2/2 he put up the following night. He won’t see meaningful minutes if the game is close, but if things get out of hand – and they often will – Williams could shine.

Rasual Butler, Los Angeles Clippers: Butler had a tough opening game (having Ron Artest in your face all night will do that to you), but he rebounded nicely with 19 points, three treys and four assists the following night. Butler should see plenty of action off the bench for the hapless Clippers, and his scoring, three-point shooting and serviceable shot-blocking talent are welcome additions for owners in deeper leagues.

Brandon Jennings, Milwaukee Bucks: All Jennings did in his first NBA start was just miss posting a triple-double – though his 17-9-9 line was marred by five turnovers. The young PG figures to make mistakes aplenty as he learns the NBA game, but the talent for Fantasy stardom seems to be there. Jennings is worth adding in just about every league – though his value is diminished if your league counts turnovers.

Ty Lawson, Denver Nuggets: Lawson may be backing up one of the game’s most durable players in Chauncey Billups, but the rookie’s impressive 17-4-6 line in his NBA debut may well earn him more minutes going forward. If you own Billups, Lawson is a must-add if you can spare the roster space; he looks like a polished NBA point guard who could pile up monster numbers should Mr. Big Shot suffer an injury.

Tyreke Evans, Sacramento Kings: Sacramento plans to emphasize youth this season, and point guard Evans is at the forefront of that movement. The fourth overall pick in the 2009 draft averaged 16 points, 3.5 boards, two assists and 1.5 steals through his first two games, so he’s definitely worth grabbing in most formats if he’s still available. Beware the turnovers that are bound to come (3.0 his first two games) but Evans’ skill set should allow him to blossom into a solid Fantasy starter – possibly as early as the second half of this season.