The Wire Troll: Brian Roberts Shooting the Lights Out 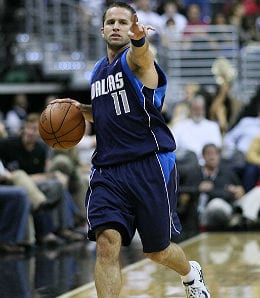 J.J. Barea is doing well now that he’s back in Big D. (en.wikipedia.org)

We’re now a month into yet another unpredictable NBA season, and Kobe Bryant is leading the league in scoring, Stephen Curry is looking like a solid MVP candidate, and the Thunder is falling out of the playoff race leaving many to wonder if OKC will be able to fight its way back into the picture.

Let’s get to this week’s Fantasy basketball waiver wire recommendations.

Avery Bradley, PG/SG, Boston Celtics (ESPN: 39.2 per cent; CBS: 47 per cent): Bradley is a starter that’s averaging over 14 points per game, which means he needs to be owned. He’s a really solid player that is getting pretty big minutes and doesn’t do a lot of bad things. You would like to see Bradley’s peripheral stats go up across the board and he’s not the best shooter, but if you need a boost in points, he’s a great pick up.

J.J. Barea, PG/SG, Dallas Mavericks, (ESPN: 4.5 per cent; CBS: 12 per cent): It’s official — Barea is back in Dallas (much to the delight of the home fans, as you can see in the video below) and is playing like it too. You’d like to see his minutes go up but his assist numbers are pretty good nonetheless. Barea is also shooting the ball really well. Keep an eye on him — especially with injury concerns in Dallas.

Brian Roberts, PG, Charlotte Hornets (ESPN: 1 per cent; CBS: 3 per cent): Roberts is starting to get it going. He’s a really good shooter, and in our opinion the best free throw shooter in the NBA. Roberts is starting to play really well in extended minutes, and with all the injuries the Hornets are dealing with recently, he’s been able to average over 17 points in his last three games. If the minutes continue, he should be strongly considered for a pick up moving forward.

Ersan Ilyasova, SF/PF, Milwaukee Bucks (ESPN: 11.5 per cent; CBS: 37 per cent): The Milwaukee Bucks are looking good as a team and Ilyasova is part of that, having scored double digit points in his last seven games after a slow start to the season. He is also rebounding fairly well. If Ilyasova’s minutes go up he could be a real double-double threat. He’s worth a pickup as a plug in play option.

James Johnson, SF/PF, Toronto Raptors (ESPN: 2 per cent; CBS: 11 per cent): Just under a year ago, we recommended Johnson as a waiver wire add, but his PT waned as the season progressed. Now, with DeMar DeRozan (torn tendon) out indefinitely, James is going to get a shot in his second tour of duty with the Raptors. Johnson, who has come off the bench exclusively so far this season, has become a better FT shooter in recent seasons, but now he’s going to be asked to play a bigger role and contribute more offensively. It’s worth picking him up to see how he responds to the extra PT.

Cody Zeller, PF/C, Charlotte Hornets (ESPN: 4.5 per cent; CBS: 23 per cent): Once again the Hornets’ injury bug continues as Marvin Williams is out with a shoulder woe, allowing Zeller to step up. Zeller has been inconsistent, however. He did have a 15-point, 14-rebound game against the Warriors on Friday, but just a few days before he managed only one rebound in roughly the same amount of minutes. He’s worth a pick up, but only play him if he has good match-up.

Ian Mahinmi, C, Indiana Pacers (ESPN: 1.2 per cent; CBS: 4 per cent): A nice rebounder, Mahinmi has started to score a little too, averaging over eight points with seven boards over his last five games. These are really nice numbers and he has seemed to locked in on some decent minutes backing up Roy Hibbert. In deeper leagues, Mahinmi is a sneaky plug and play. He should be owned by most Hibbert owners as well.

By McCade Pearson
Tags: NBA
This entry was posted on Saturday, November 29th, 2014 at 9:49 pm and is filed under BASKETBALL, McCade Pearson, The Wire Troll. You can follow any responses to this entry through the RSS 2.0 feed. Both comments and pings are currently closed.