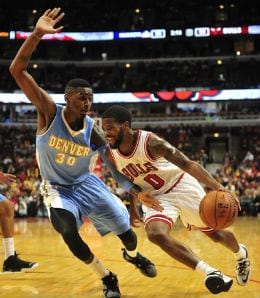 Welcome back to another week of Fantasy basketball coverage. This week’s WTF: John Wall has the Wizards rolling, while Cleveland — despite all its high profile additions — is under .500; The Bulls’ injury woes are growing with the loss of Taj Gibson (ankle); and Jeff Taylor has no plans to appeal his 24-game suspension for domestic abuse.

McCade Pearson is off this week, but will return next week. In the meantime, you’ll have to settle for your trusty editor this week.

Want these NBA players in your daily Fantasy lineup? Come and check out BetAmerica Sports for free and win thousands of dollars this NBA season.

Aaron Brooks, PG, Chicago Bulls (ESPN: 12.6 per cent; CBS: 28 per cent): Brooks was a waiver wire recommendation in late March and it worked out well as he finished so strong last season for the Nuggets. Now, with both Derrick Rose and Kirk Hinrich hurting, Brooks is getting his shot with the Bulls. Brooks started Friday and put up his second straight 12-point effort thanks to a pair of treys. He’s recorded a steal in each of the last three games and given that he’s the only active PG in the Windy City right now, he’s worth playing until his teammates get healthy. Brooks hasn’t been jacking up quite as many treys this season, but he’s stuffing big men on occasion (see video below).

K.J. McDaniels, SG, Philadelphia 76ers (ESPN: 9.3 per cent; CBS: 44 per cent): Because McDaniels is coming off the bench, his PT has been all over the map, making him a tough play. But on Friday he saw 28 minutes and responded with 17 points. He came out of college with a reputation as a solid defender, but that’s actually an area — at least perimeter D — that he needs to address. McDaniels did manage two steals Friday and we’re willing to take a risk here that he starts seeing at least 20 MPG consistently.

Nikola Mirotic, PF, Chicago Bulls (ESPN: 2.5 per cent; CBS: 16 per cent): With Pau Gasol out, Mirotic found himself as the first big off the bench for the Bulls on Friday, and then Taj Gibson went down. Mirotic suddenly has big-time potential and after going off for 24 points, 11 boards, four treys and two assists, he’s going to be a popular pickup, so grab him now. All these injuries in Chicago are allowing some of the youngsters like Mirotic a chance to learn the game on the fly.

Austin Daye, SF, San Antonio Spurs (ESPN: Unowned; CBS: Unowned): Man, it’s been a long time since Daye veered onto the Fantasy radar, but after his performance, Friday, he bears watching at the very least. With Matt Bonner (illness) unlikely to suit up Saturday, Daye has a chance to build on Friday’s showing of a double-double with three treys. Feeling lucky? Daye could be a nice plug-and-play option in larger formats.

Brandan Wright, C/PF, Dallas Mavericks (ESPN: 13.8 per cent; CBS: 22 per cent): Wright, who we slotted 33rd in our Centre Rankings this season, has actually been playing at around a top 15 level, making him a very viable starting option in 14- or 16-team leagues. He’s still not getting as much PT as he deserves, but six straight double-digit scoring games, with incredibly high FG shooting, respectable boards and good block numbers should have your attention. If Tyson Chandler or Dirk Nowitzki were to get hurt, Wright’s value would skyrocket.

Marreese Speights, C/PF, Golden State Warriors (ESPN: 4.9 per cent; CBS: 9 per cent): Speights is another dude that’s been off the radar for some time, last being recommended in early February 2013. But his PT is starting to creep up lately to the point where he’s putting up some numbers, including at least 13 points in three straight games and a few games in which he flirted with a double-double. The Warriors have some serious depth these days, but right now Speights is looking like the main big off the bench. Just beware that David Lee’s return is around the corner and that will likely spoil the party.

By RotoRob
Tags: John Wall
This entry was posted on Saturday, November 22nd, 2014 at 5:00 pm and is filed under BASKETBALL, RotoRob, The Wire Troll. You can follow any responses to this entry through the RSS 2.0 feed. Both comments and pings are currently closed.