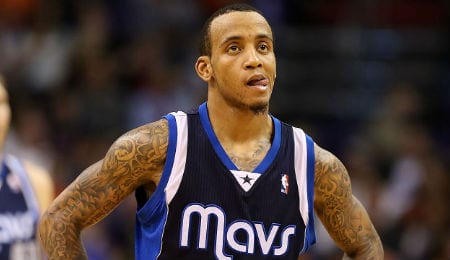 Monta Ellis gives the Mavericks some serious speed in their backcourt. (Warwithwords.com)

We are back with more of the 2014-15 RotoRob NBA Draft Kit. So while you wonder whether Carmelo Anthony is the most underrated superstar as he claims, let’s shift over to the shooting guard position and count down the top 43.

From the two-guard slot, you’ll be concentrating on scoring and three-pointers. There really isn’t a lot to choose from among the top-tier players here, so don’t sweat it if you don’t land one of the top two because there is a big group below that to choose a high quality two guard from. Overall, however, there’s a general scarcity of talent at this position, so don’t avoid it for long — especially when waiting to land your second SG.

1. James Harden, Houston Rockets (1): An honourable mention for 2013 RotoRob Fantasy Basketball Stud of the Year, Harden has now been teamed with Dwight Howard in the hopes of bringing an NBA title back to Houston. Harden just continues to improve, last season seeing slightly less touches in slightly less minutes, yet still sinking the same amount of FGs per game.

2. Kobe Bryant, Los Angeles Lakers (6): Bryant remains a star attraction despite the nightmare that was last season. He only played six games, his PT was way down, and his shooting touch was dramatically worse. But this dude is way too driven to not have another great season in his game — even if he does get schooled by Jay Chou (see video below).

3. Klay Thompson, Golden State Warriors (4): Thompson is due for an extension and if he continues his trajectory of improvement, it’ll be a no brainer for the Warriors (even if they are going to be up against the cap for a while). Last season, Thompson became a more integral part of the offense, and while his FT shooting has slid the past couple of seasons, he did a better job on the offensive glass.

4. Monta Ellis, Dallas Mavericks (5): The lightning fast Ellis has finally achieved a run of good health the past couple of seasons, but his overall game has gradually regressed since his career season in 2009-10. In his first season with the Mavs, he didn’t sink quite as many field goals and wasn’t hoisting any many from beyond the arc, however he did do a better job of canning his treys.

5. Dwyane Wade, Miami Heat (3): How much did the aging and brittle Wade have to do with LeBron James’ decision to leave Miami? Now Flash is charged with again being the man for the Heat and it will have to start with him being in lineup every game. He actually enjoyed his best shooting season ever in 2013-14, but his scoring from the line has dropped five straight seasons.

6. Eric Bledsoe, SG/PG, Phoenix Suns (27 at PG): As we expected, the Suns retained Bledsoe. The former Kentucky star broke through with a career season — while healthy. Bledsoe more or less became a full-time starter and did a way better job of getting to the line. He also became a better distributor, showing solid floor general skills out of a combo guard role.

7. Bradley Beal, Washington Wizards (7): Beal’s improvement last season was a big reason why the Wizards made it back to the playoffs for the first time since 2008. We’d still like to see him get more points at the line, but the fact he’s now a steal per game dude was a nice bonus. Watch for Beal to take another huge step forward in his third season. Note that he’ll miss a couple of months with a wrist injury.

8. Wesley Matthews, Portland Trail Blazers (17 at SF): Matthews was dealing with an irregular heartbeat this fall, but it sounds like a non-issue now. He enjoyed his finest season in 2013-14, staying healthy, tying for seventh in three-pointers per game and doing his best work yet off the glass.

9. Lance Stephenson, Charlotte Hornets (NR): We expected the Bulls to land Stephenson, but instead, Charlotte nabbed the defensive stalwart. It’ll be interesting to see how much the Pacers miss him after he enjoyed a major breakthrough last season. Stephenson sunk more buckets and did a better job of getting to the line, but also got into more foul trouble (not surprising, considering how often he was asked to guard the other team’s star). How about five triple doubles last season? Yes, Stephenson has that kind of across the board talent.

10. DeMar DeRozan, Toronto Raptors (15): DeRozan’s steady improvements finally landed him on Team USA this summer, and why not? He improved his accuracy from downtown, got to the line more often and even did a better job distributing the rock. Has DeRozan finally plateaued, or is there more upside still?

11. Victor Oladipo, Orlando Magic (12): Oladipo didn’t take over the game as a rookie, but it’s not as if his freshman effort wasn’t impressive. He stayed healthy, did a good job of getting to the line and improved his touch once he did arrive at the stripe. This season, the Magic should become Oladipo’s team, and he has a great new weapon in Aaron Gordon to feed. Many believe Oladipo could become the next Dwyane Wade. While that might seem ambitious, we’ll know a lot more after this season.

12. Jimmy Butler, Chicago Bulls (22): We recommended Butler as a waiver wire pick in late November, and it was a superb pick as he remained a viable force for the remainder of the season. He averaged a three-pointer per game, did a way better job of getting to the line and even had a few more blocks. Expect Butler to really thrive now that Derrick Rose is back.

13. Arron Afflalo, Denver Nuggets (23): After two seasons with the Magic, Afflalo is back in Denver as the starting two-guard. Last season, despite putting up his best overall numbers, his PT dipped slightly, his FT shooting regressed and he didn’t bag quite as many steals. Afflalo has improved in every one of his seven NBA seasons.

14. Kevin Martin, Minnesota Timberwolves (16): After a couple of seasons of major regression, Martin really bounced back nicely in his first campaign with the T-Wolves. Moved back into a starting role, he experienced the corresponding boost in PT, sinking more buckets with way more touches. Unfortunately, Martin didn’t shoot as well, but got to the line more and even picked things up defensively with an increase in boards and steals.

15. Joe Johnson, Brooklyn Nets (13): Part of a super expensive Net team, Johnson slightly regressed in his second season in Brooklyn. He actually got to the line a bit more often, which helped his scoring, but his FT percentage dipped slightly. Johnson’s turnovers were down for the third straight season, but it’s clear that this aging guard’s best days are behind him.

16. Eric Gordon (14): Gordon again struggled with injuries last season, having to shut it down early. He’s been jacking up fewer and fewer treys over the past few seasons and his trips to the line have also regressed dramatically the past two campaigns. Worse yet, Gordon’s FT percentage was down significantly last season, but at least he did better from a rebounding perspective. Overall, last season marked a bit of a bounceback, but he’s still miles from his level of performance when he was with the Clippers. On a positive note, Gordon’s scoring touch seemed to have returned this preseason.

17. Giannis Antetokounmpo, Milwaukee Bucks (NR): Antetokounmpo flashed some impressive across-the-board skills as a rookie last season, but with his PT expected to rise significantly this season, we’re finally going to really see what he’s capable of. We’re expecting more of an exterior game combined with impressive rebounding numbers from this oversized two-guard. This dude is one serious athlete and we can’t wait to see that athleticism translate into production.

18. Alec Burks, Utah Jazz (NR): One of our top sleepers this season, Burks quietly enjoyed a major breakthrough last season. Although he didn’t shoot quite as well from beyond the arc, he did a better job on the glass and doubled his scoring average from the previous season. Burks will take over as the starting two in Utah, and should be the main offensive force on the Jazz.

19. J.J. Redick, Los Angeles Clippers (24): In early-April, we recommended Redick off the waiver wire, and it was a nice pick as he wound up sinking more buckets — especially three-pointers — down the stretch. Overall, it was likely Redick’s most effective season, but injuries cost him a significant portion of the campaign. And now the Clips have drafted C.J. Wilcox, who may very well eat into Redick’s PT.

20. Jamal Crawford, Los Angeles Clippers (19): Crawford dealt with some injury issues last season, but he was fantastic when he was active. He hoisted up way more treys, earned more points from the charity stripe and even did a better job on the glass. Crawford will reprise his role as the main scorer off the Clippers’ bench this season.

Minnesota finished up draft night by snagging a much needed wing player with a lot of potential and enough polish to contribute right away in Robinson III. He looks the part of an NBA player, solid frame and smooth shot, but for some reason or another he failed to consistently grab the spotlight at Michigan and show the NBA scouts he was worthy of anything more than a second round pick. As with fellow draftee LaVine, Saunders will mold Robinson III into a solid player that will be around for many seasons to come.

Forte is starting to age in running back years (28), but fear not, his skills appear to be as sharp as ever. He has missed just five games in six seasons, and last year he set career highs in rushing yards (1,339), rushing touchdowns (nine), first downs (74), receptions (74) and receiving yards (594).