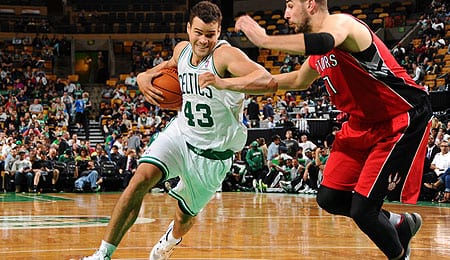 Chicago’s inability to make much progress has left GM John Paxson’s future in doubt. While the Chicago Bulls have ridden a better offense to slight improvements over last season, they have failed to garner any real momentum this season. In fact, judging by their month-by-month record (1-1 in October, 7-8 in November, 6-9 in December, […]

Rookie Allan Ray is looking very strong in the absence of Delonte West. Everyone is rather used to seeing Jason Kidd rack up a triple-double, so when he did it last night, it was no biggie. But when Vince Carter joined him in the feat, the two became the first teammates to do so in […]

Even old people need excitement. Hell, there’s a whole industry (Cialis, Viagra, etc.) devoted to this concept. So imagine how stoked Clifford Robinson was when he returned from knee surgery this week to find that his New Jersey Nets had added a new component to their in-game entertainment package. Robinson, at 40 the NBA’s senior […]