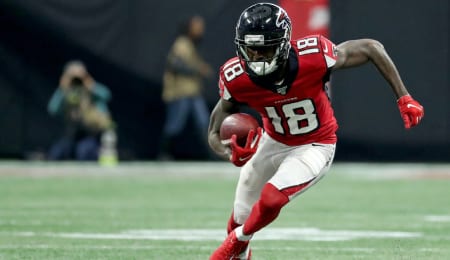 Calvin Ridley is likely to see a major boost in targets. (SI.com)

We’re back with another installment of the 2020 RotoRob NFL Draft Kit as we unveil our top 10 sleepers, the type of player that provides significant value over their peers at a similar ADP. We chose not to exclude high-round draft picks to highlight which player is a bargain at their ADP regardless of their prescribed value. Below is our top 10 sleepers for the 2020 Fantasy football season.

1. Calvin Ridley, WR, Atlanta Falcons (ADP: 38, WR17): As we presented in RotoRob NFL Draft Kit: Wide Receiver Rankings, Ridley is projected as the 12th best Fantasy receiver for 2020, seven spots higher than FantasyPro’s PPR rankings. Matt Ryan will need to attempt close to 600 passes to keep his team afloat (616 pass attempts in 2019) and the departure of Mohamed Sanu, Devonta Freeman and Austin Hooper leaves 209 targets on the board (33 per cent target share). A tremendous route runner (see video below), Ridley has been the go-to receiver when trailing, as opposing defenses sell out to stop Julio Jones. As a result, Ridley put up a 35-465-3 line when the Falcons were down, compared to 12-170-1 when leading, and 16-231-3 when tied. Russell Gage is the only other receiver to clear more than 50 targets in 2019.

2. Terry McLaurin, WR, Washington Football Team (ADP: 49, WR23): McLaurin had a hell of a rookie year considering the mismanagement of Dan Synder‘s organization. In 14 games, McLaurin recorded 58 receptions on 93 targets, 919 yards and seven touchdowns despite having multiple quarterbacks throwing to him. In fact, his season ranked as the second best for Fantasy purposes among rookie WRs. Similar to Allen Robinson, McLaurin is unfazed by poor quarterback play: 28-458-5 with Case Keenum and 30-461-2 with Dwayne Haskin. With the latter, McLaurin saw his target share jump to 24 per cent. HC Ron Rivera and OC Scott Turner are likely to improve the team’s passing volume (28th in the league), which is more good news for McLaurin.

3. Jarvis Landry, WR, Cleveland Browns (ADP: 64, WR29): Finishing as the 12th-ranked Fantasy receiver last year, Landry outpaced Odell Beckham Jr. to finished with 83 receptions on 138 targets for 1,174 yards and six touchdowns. Averaging 8.6 targets, Landry is once again a solid buy. As we discussed in our Top 10 Busts article, HC Kevin Stefanski‘s preferred method of attacking the middle of the field is through the slot receiver. We believe Austin Hooper will be on blocking duty with the occasion play-action pass. If he’s healthy, we expect Landry to finish among the top 15 wide receivers.

4. James White, RB, New England Patriots (ADP: 72, RB30): Since LeGarrette Blount‘s departure after the 2017 season, White ranked as Fantasy’s seventh best back in 2018 and 18th in 2019. White averaged 109 targets to go along with an average of 344 rush yards on 80 carries over the last two seasons. The signing of Cam Newton elevates short passes, theoretically bolstering White while hurting Sony Michel. HC Bill Belichek will no doubt lean on the pieces of offense he trusts in such a tumultuous year. Expect less Michel and more White (yes, we’re saying that Sony could lose his share… sorry).

5. Brandin Cooks, WR, Houston Texans (ADP: 81, WR35): In our our Top 10 Busts, we highlighted why Will Fuller isn’t worth the investment capital. Cooks can literally be drafted at the same ADP. Discounting last season because of Sean Mcvay‘s decision to exclude Cooks in the 12 formation, Cooks averaged 116 targets, 1,153 yards and six touchdowns over his first five seasons with New Orleans, New England and the Los Angeles Rams. Deshaun Watson is the fourth and best deep-ball quarterback Cooks has had in the NFL.

6. Jamison Crowder, WR, New York Jets (ADP: 90, WR39): In his split with Sam Darnold, Crowder averaged 63 yards on 9.7 targets with an ADoT of 7.6 yards. Overall last year, the stud PPR receiver finished as the 26th-ranked Fantasy receiver with 78 receptions on 122 targets for 833 yards and six TDs. Robby Anderson‘s departure frees up 96 targets, most of which should be reallocated to Denzel Mims. Moreover, in trading safety Jamal Adams, the defense has taken a major hit, which will mean a lot of passing on offense. As the grandfathered receiver on the offense, Crowder should feast.

7. Darius Slayton, WR, New York Giants (ADP: 98, WR42): The New York Giants’ offense as a whole has improved a lot since last year. We believe they might have too many mouths to feed this year as they return Golden Tate, Sterling Shepard, Evan Engram, Saquon Barkley and Slayton. Regardless, Slayton cemented himself as the Giants’ field-stretcher, earning 48 receptions on 84 targets for 740 receiving yards on 1,197 air yards (team high) and eight touchdowns. As the only receiver on the team with an ADoT of 10+ yards on more than 50 targets, Slayton is worth a flier in the mid to late rounds.

8. Mike Gesicki, TE, Miami Dolphins, (ADP: 115, TE13): Miami is one of Fantasy’s cheapest landscapes. The Dolphins will, no doubt, run a heavy RPO offense led by Tua Tagovailoa and OC Chan Gailey, who coincidentally, is the grandfather of the RPO. In 2018, Tagovailoa passed on 51 per cent of RPO plays in college, highest among qualified college quarterbacks. When running an RPO, Alabama’s offense ranked first in yards-per-play and first in plays with positive EPA. Prioritizing the quick pass to the closest receiver next to the O-line will benefit Gesicki, who plays in the slot 66 per cent of the time.

9. Daniel Jones, QB, New York Giants (ADP: 117, QB14) and Gardner Minshew II, QB, Jacksonville Jaguard (ADP: 158, QB23): We’re cheating a bit here, giving you a two for one with a pair of sophomore quarterbacks. Jones finished his rookie year by throwing 284 times for 3,027 yards, 24 touchdowns and 12 interceptions. The Eli Manning-esque gunslinger finished as Fantasy’s 23rd-ranked quarterback in 13 games. Despite the optimism, Jones has a sack rate 7.6 per cent (ninth highest in the league). Filling in for Nick Foles, Minshew threw 258 times for 3,271 yards, 21 touchdowns and six interceptions. Averaging 7.0 yards-per-attempt, Minshew outplayed his counterpart and earned the starting QB job in 2020. The Jaguar King is a prime candidate for those who waited to draft a quarterback until the very end.

10. James Washington, WR, Pittsburgh Steelers (ADP: 192, WR71): Although we don’t expect Ben Roethlisberger to attempt close to 675 pass attempts like he did in 2018, we do expect that he’ll throw a hair under 600 passes thanks to a great defense heading into 2020. Diontae Johnson has impressed in Big Ben’s absence but his average depth of target (ADoT) is too similar to JuJu Smith-Schuster‘s. Weight Opportunity Rating (WOPR) suggests Washington was more efficient with his targets than both Smith-Schuster and Johnson at a longer range (ADoT of 15.8 yards). With the most air yards on the team, Washington is shaping to be the next Antonio Brown.

Houston contemporary Christian band Caedmon’s Call got it starts in 1993, remaining active until 2010. In 2000, the band released Long Line of Leavers, and from this effort comes “Dance.”

Now it’s your turn. Let us know in the comments below which players you’re targeting as sleepers in your Fantasy football draft this season.

Graveman went from Low-A to the big league roster in one year and his minor league numbers didn’t skip a beat as he moved to the higher levels. In 167 1/3 IP he allowed 142 hits and 31 walks while striking out 115 in posting an outstanding 1.83 ERA. He will definitely be a part of the A’s pitching plan this season.

We fully expect Rubio to be given the keys to the offense and to help this team grow around his skills and develop this talented group of youngsters into a good team over the next few seasons. We think his assist numbers will go up, and he’s already a great source of steals. Finally, let’s remember that Rubio is still only 23 years old.