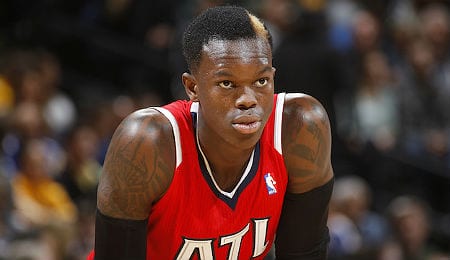 Dennis Schroder has really picked up his play lately. (nbanationaustralia.com)

Welcome back to another week of Fantasy basketball. Despite Kevin Love’s woes, Cleveland has moved into the No. 2 seed in the East; Russell Westbrook apparently helped the scorer award him a board en route to a sixth triple-double in eight games; and Rick Carlisle is very pleased with the development of Rajon Rondo’s play calling.

Dennis Schroder, PG, Atlanta Hawks (ESPN: 12.0 per cent; CBS: 43 per cent): Heading into the season, we suggested that Schroder could pose a threat to Jeff Teague’s PT, and while Teague is having a career season, his PT is down slightly, and he’s in a bit of slump, opening the door for the German sophomore, who has been playing really well as of late. Scoring in double figures in his past seven, Schroder is averaging 12 points and six assists since the All-Star break. He isn’t a flashy pickup, but could be a sneaky one that could steal a title for you. Schroder also plays with an edge to his game (see video below), if that means anything to you.

Shaun Livingston, PG/SG, Golden State Warriors (ESPN: 4.8 per cent; CBS: 13 per cent): Livingston is starting to get in a groove. Over the past nine games, he’s averaged 11 points and five assists while doing a solid job on the glass, putting up games of eight and 10 rebounds in that span. If Livingston continues to play he is a great plug and play — especially if the Warriors opt to give Stephen Curry or Klay Thompson some rest down the stretch

Tony Allen, SF/SG, Memphis Grizzlies (ESPN: 6.0 per cent; CBS: 23 per cent): If you’re in a Roto league and need steals, look no further, as Allen is your man. Averaging 2.3 steals, he can provide a huge boost there, and isn’t too big of a pain in other categories.

Michael Beasley, SF/PF, Miami Heat (ESPN: 1.7 per cent; CBS: 9 per cent): Yes, Beasley is back in the league and yes, he might be worth a look as a deep Fantasy league option. He has walked back into Miami and is averaging 24 minutes and 10 points and is only getting more comfortable. Beasley is a deep pick but with Chris Bosh out for the season who knows what this former phenom is going to do the rest of the way.

Cole Aldrich, New York Knicks (ESPN: 2.8 per cent; CBS: 11 per cent): There is a lot of minutes to go around on the Knicks and Aldrich has been rebounding well of late. He had possibly his best game of the season on Tuesday when he had 17 and 13 against the Jazz. Aldrich is another low risk pickup with not the biggest reward but a big enough one, considering how tough it is to find help at this position at this time of the season.

Bismack Biyombo, Charlotte Hornets (ESPN: 1.2 per cent; CBS: 8 per cent): In mid-December, we recommended Biyombo as a block specialist, and while he didn’t pot many field goals in December, he was well worth owning in January based on his rebounding work. Unfortunately, a knee woe cost him all of February, but he’s back now and is worth another look thanks to injuries to both Al Jefferson and Cody Zeller. Biyombo got the start Friday and managed a double-double despite foul trouble. You know when this dude gets the minutes, the boards and blocks will come, so he’s a perfect short-term addition as long as Big Al is ailing.