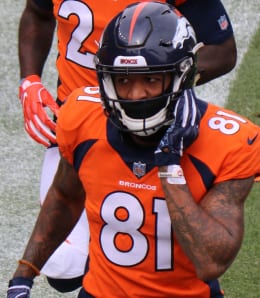 Tim Patrick has taken advantage of his chances. (Jeffrey Beall)

As we head into the weekend portion of Week 14, there’s plenty of reason to be concerned about some of the game’s top quarterbacks with the playoffs just around the corner. But in the meantime, we have some huge games on tap, including Kansas City at Miami and Pittsburgh at Buffalo. And then there’s Dallas at Cincy… uh ya. Well, at least there’s the Andy Dalton returning the scene of the crime narrative to follow.

1. The Cowboys’ D has been historically bad this season, giving up 32.8 points per game — the worst mark in the history of this proud franchise. So, this seems like a good week to start any fringe Bengal offensive weapons, even though Cincy’s offense has hardly been worth highlighting this year (27th in the NFL). On the other side of the ball, given his career performance against AFC North teams, Ezekiel Elliott could be headed for a huge week. Our No. 3 player heading into the season has enduring perhaps the worst season of his career, but he’s looked much better in two of the last three games. Expect Zeke to roll over the Bengals, and perhaps even find the end zone for the first time in eight games.

2. For what it’s worth, the Broncos have owned the Panthers over the years (going 5-1, including the playoffs), but with both teams currently sporting 4-8 records, this game has limited appeal outside of Fantasy circles. Okay, so not much has gone right in Mile-High City this year, but how about Tim Patrick‘s breakout? He was only targeted four times last week, but hauled them all in — two for touchdowns (check out his gorgeous second score in the video below). Patrick actually leads Denver receivers in both yardage and TDs this season after showing modest promise in his first two years. It’s become clear that he’s established himself as a building block in this offense and he should enjoy a nice effort against a meh Panther pass D.

3. Given how offensively dominant the Packers have been within their own division this year (scoring on average 37 points per game) Detroit is going to have its hands full here on D (which does not bode well considering how awful the Lions have been defensively this season). Detroit is coming off a win over a divisional foe, but that was against the free falling Bears. The Packers have a slightly better pass defense than Chicago, so it will be interesting to see how Detroit TE T.J. Hockenson fares. He’s been targeted more and more in recent games and is on a nice roll, now leading the team in receptions and ranking second in yardage and touchdowns.

4. Speaking of Green Bay and the fact it’s been kicking ass in the NFC North (3-1 record), you can expect more of the same this week in Detroit. Make sure all your key Packer skill players are active, especially red hot WR Davante Adams (as if you’d sit him!). He absolutely torched the Eagles secondary last week (then again, that seems to be a more common theme against this unit lately), hauling in 10 catches for 121 yards and another pair of TDs. Only five receivers have more targets than Adams this season, and the variety of routes he runs is really unparalleled, which is a key reason he’s such a dangerous weapon. Detroit’s secondary is in for a long day.

5. The Texans will try to remain undefeated (4-0) all-time against the struggling Bears, but here’s the issue: Houston is struggling on defense. And when we say struggling, we’re talking about the worst issues this team has ever had, giving up more total yards and rushing yards per game and the highest opponent passer rating in team history. This is great news for Bears QB Mitchell Trubisky, who excelled against Detroit and could be in line for another big game this week. Further, the Bears’ rushing game is finally showing life, so while Cordarrelle Patterson has been virtually invisible as a receiver, he had a nice game on the ground against the Pistons, and could be in line for more of the same this week.

6. Indianapolis’ stout D (which has shown some cracks recently) has to deal with a Raider offense that has been piling up the points, reaching 30 or more in four of its last five games. On offense, we’re still waiting for rookie RB Jonathan Taylor to be set free as he only got 13 totes last week after getting 22 touches in Week 12 (his second highest total of the season). He still managed to pile up an impressive 91 yards against Houston, but against Las Vegas he’ll be a bit more hard pressed to enjoy a third straight 90-yard effort.

English prog rock band Genesis got its start in 1967, remaining active until 2000, forming again for a year in 2006, and then reforming for a third time this year. In 1977, the band released its second live effort, Seconds Out, which included “Dance on a Volcano,” one of our personal faves.

Oh man, there’s some sweet-looking games on tap for Week 11. We already witnessed a great battle for NFC West supremacy on Thursday. On Sunday, we’ve got Tennessee and Baltimore in a rematch of last year’s AFC divisional playoff game; Green Bay’s offense vs. Indy’s D; and KC taking on Las Vegas, with the Chiefs seeking to avenge their only loss over the last 15 games. Monday offers another big one with the Rams traveling to Tampa Bay.

By RotoRob
Tags: fantasy football
Posted in Fantasy Notes, FOOTBALL, RotoRob | Comments Off on Fantasy Football: The Preseason is Underway