The Wire Troll: C.J. Watson’s Got Derrick Rose’s Back 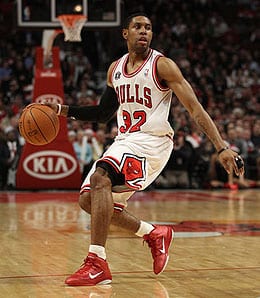 C.J. Watson has been a capable fill-in while Derrick Rose deals with back woes.

Welcome to another installment of the Wire Troll, where we dig deep to find those hidden gems that can help you to Fantasy basketball glory. In the last week, owners of Derrick Rose, Carmelo Anthony and Jarrett Jack have been frustrated by health issues for their players (however, Melo is making progress and could return from his groin injury sooner than expected). In Jack’s case, his injury has opened the door for Greivis Vasquez to once again show the world he deserves a larger role in New Orleans.

As always, anyone on the list is currently available in at least 50 per cent of leagues on both ESPN and Yahoo!

C.J. Watson, PG/SG, Chicago Bulls: For several years, Watson has been one of the those bench dudes that instantly becomes tres valuable once the starter goes down. In Golden State, he was a fine add when Stephen Curry got hurt and now he’s backing up Derrick Rose and the MVP’s suddenly wonky back. Watson has started two of the past three games for Rose, and has seen a general uptick in minutes thanks to Rose’s condition – and the fact that even when Rose has been healthy, the Bulls have been blowing out opponents, giving extra PT to all the bench players. In 25 minutes of action Friday, Watson shot it decently (3-for-7), but put some nice peripherals with five assists, four steals and three boards. On Monday, he came through with a double-double, his first since he was a Warrior. Rose remains day-to-day, giving Watson a small window to put up big numbers.

Greivis Vasquez, PG/SG, New Orleans Hornets: When Jack got hurt recently, Vasquez exploded onto the scene and gave us a glimpse of what he’s capable of. He’s getting that shot again with Jack out a week with a knee woe, and while he’s struggled with his shot the past couple of games, the minutes have been there (37 on Friday) and Vasquez is helping in other areas, dropping seven dimes and racking up five steals on Friday. This young Venezuelan is making the case for regular PT with the struggling Hornets even after Jack comes back (perhaps as the starting two-guard, or at least nice bench minutes as a combo guard). Short-term, he’s a must-add; longer-term, he could be a very prudent stash.

Ramon Sessions, PG/SG, Cleveland Cavaliers: Sessions is starting while Kyrie Irving deals with a concussion, and the vet is racking up the dimes (29 in the past two games).

Gordon Hayward, SG/SF, Utah Jazz: Hayward is gaining great traction as the starting two-guard in Utah, scoring in double digits in seven of the past eight games.

Alonzo Gee, SG/SF, Cleveland Cavaliers: Gee got his first start of the season at SG for the Cavs on Tuesday before heading back to the bench, but whether starting or coming off the bench, Gee’s been getting enough burn lately to be worth an add in all formats. He’s seen at least 30 MPG of action in every game this month, and looked fantastic Friday, canning 6-of-11 (including 3-for-5 from beyond the arc) for 18 points with a rare block. Other than points, treys and steals (a cat in which Gee’s been surprisingly quiet lately), he won’t provide much more, but his percentages (especially from the line) have been much better this season, and since arriving from Washington midway through last season, Gee has become an important piece for the Cavs, so it’s high time for him to earn some Wire Troll love.

Quincy Pondexter, Memphis Grizzlies: Pondexter has started the past few games for the Grizzlies with Tony Allen (hip) out, and even with Allen back Friday, Pondexter got the start (however, his minutes were severely reduced). Pondexter was a great rebounder in college, and he’s flashed that ability in the NBA from time to time – on Wednesday, for instance, when he pulled down half a dozen from the glass while piling up a career best 17 points with a couple of dimes. He continued to show a nice touch Friday (3-for-5), pitching in with six points and a block, but now that Allen is back in the fold, Pondexter is only an option in deeper formats – whether starting or coming off the bench. Still, the fact that he’s retained the starting role (for now), means that Pondexter has to be, at the very least, on the radar for standard sized leagues.

Ersan Ilyasova, SF/PF, Milwaukee Bucks: Since the Bucks lost Andrew Bogut, Ilyasova has been one of the key frontcourt players to benefit – especially on the glass.

Amir Johnson, PF/C, Toronto Raptors: Inconsistency, thy name is Amir Johnson, but when he’s on, he’s a must-own player and right now, he’s on. Heading into the season, we expected him to be a top 25 power forward and he’s fallen a bit short on those expectations, hence his availability on most waiver wires. Johnson has dealt with some personal issues this season, and it’s definitely affected his performance, but he’s starting for the Raps now and is delivering, racking up his sixth double-double Friday while playing solid D as Toronto held Boston to just 74 points to exact some revenge on the Celtics, who kicked the shit out of the Raps last week. He was an efficient 4-for-4 from the field and pitched in with a couple of blocks and a steal, so if you need a big man, grab Johnson while he’s playing well.

Jason Thompson, PF/C, Sacramento Kings: We recommended grabbing Thompson a few weeks ago, and we’re here to repeat that suggestion, as he’s been looking great, yet is still widely available. After a couple of down games this week, Thompson bounced back with a double-double Thursday, chipping in with three assists and a steal as well. It was his fifth double-double of the season, and while Thompson is a blight on your FT percentage, the fact that his strong effort helped the Kings finally beat the Thunder Thursday should help him hold the starting centre gig for the time being.

Marreese Speights, PF/C, Memphis Grizzlies: Speights has looked lost at times, but he pulled down 15 boards on Wednesday and followed it up with another nine rebounds plus 19 points and two steals Friday, so it’s time to give him another look.

Bismack Biyombo, PF/C, Charlotte Bobcats: Biyombo has taken over as the starting centre for the struggling Cats and he’s managed one double-double in three tries, just missing another one on Friday.