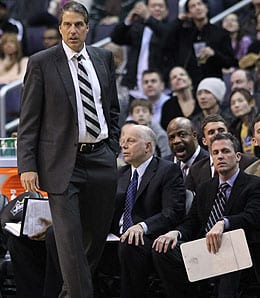 After plenty of failure, Randy Wittman is finally ready for the playoffs.

Thanks to a 26-point serious bitch-slapping of the Boston Celtics Wednesday, the Washington Wizards have clinched a playoff spot for their first postseason berth since 2008.

Star PG John Wall had an easy night given the one-sided score, playing just 28 minutes. Yet he still recorded a double-double with two steals. Heading into the season, we identified Wall as a player that could lead you to Fantasy glory, and right on cue he’s come through with his finest campaign yet.

Not only has he finally stayed completely healthy, but his outside game has really matured. Unfortunately, that’s come at a cost as he’s not getting to the line as often. Wall’s modest block numbers have also dipped, but with a career high in both points and dimes, he’s finally emerged as an elite point guard. It took him until season No. 4, but the speedster is finally going to taste postseason play. Best of all, Wall doesn’t sound ready to let down now that they’ve achieved their goal (see video below).

For Coach Randy Wittman, it’s been a long haul to finally guide a team to the playoffs. In two seasons with Cleveland, he finished a combined 40 games under .500. Six years later, he got another chance, taking over the T-Wolves halfway through the 2006-07 season and guiding them to 30 losses in 42 tries. After a 4-15 start the next season, Wittman was canned again.

He ascended to the head job in Washington with 49 games remaining in the 2011-12 season and proceeded to lose 31 times. Washington won just 29 games last season, but this season it sits at 39-36 through 75 games.

Sophomore two-guard Bradley Beal, who was considered for the RotoRob 2014 Fantasy Basketball Rookie of the Year award, had an incredibly efficient game Wednesday. In just 31 minutes, he canned 7-of-8 from the floor and went 4-for-4 from the line for 19 points with one steal. Beal is clearly out of whatever slump he was in last week, and he has also taken his game to a new level this season.

Seeing more PT, Beal has responded by becoming a bigger part of the offense, although we’d still like to see his shooting touch improve a bit. Like Wall, he has not gotten to the charity stripe as often, but it hasn’t hurt him scoring-wise too much as his success rate is up. Beal’s rebounding is pretty much identical, but his scoring has risen three points per content. There is still no doubt in our minds that this kid is a 20 PPG player waiting to happen.

Now it’s your turn. Let us know in the comments below what the difference has been for Washington this season.

Ibaka’s PT has risen as the season has progressed and if this keeps up, soon everyone will realize this dude is a superstar. We love the fact that he’s nearly matched his free throw attempts from all of last season and we’re only in early January – another sign of growth.

By RotoRob
Posted in BASKETBALL, NBA Today, RotoRob | Comments Off on NBA Today: Serge Ibaka is Now a Superstar

What’s your prediction for Game Four Tuesday? Will the Heat hold serve to grab a commanding three games to one lead or will the Thunder steal home court advantage back and square this affair?

We’ll be fascinated to see what tactics the Thunder employ to try to keep James under wraps – or at least minimize his impact.

Let’s look at the reasons why he wasn’t a Hall of Famer: he never won a championship; in 18 seasons, Miller was never named to either the first or second All-NBA Team, receiving just three nods as a third teamer; only twice did he receive any MVP votes, never winning the award; he wasn’t much of a rebounder, didn’t get many assists and, while he’s currently 14th overall in points, his career PPG average of 18.2 only ranks 91st; he’s only 45th all-time in 3-point percentage.