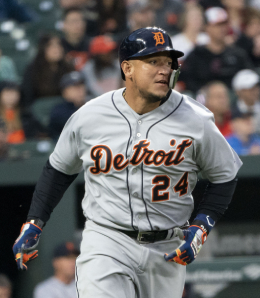 In early August, we reported that Detroit Tiger great Miguel Cabrera was considering retirement after the 2022 season, but since then he clarified that 2023 will in fact be the final campaign of his amazing career.

But then again, who knows? Now that Detroit is making its park more hitter friendly, perhaps Miggy will have a change of heart? We’re certain there’s plenty of Latin American rappers that sure hope so (see video below).

One thing we do know for sure is that whether his career ends now, at the end of 2023 or at some other point, this is a sure fire Hall of Famer. We’ll let the numbers speak for themselves more below, but consider this: only six players have had careers more similar to Hall of Famer Dave Winfield than Cabrera, and the only ones that haven’t been enshrined in Cooperstown are either tied to steroids (Rafael Palmeiro), or not yet eligible for election (Carlos Beltran, who will be on the ballot for the first time this year, and Adrian Beltre, eligible next year).

So let’s not even consider the possibility that Cabrera is anything but HoF worthy. It’s preposterous to suggest otherwise.

But there’s also no overlooking the fact that the road to Cooperstown has been a tough slog in recent years. The Tigers’ first baseman/DH had a decent year in the Covid-shortened 2020 campaign, but has been in regression since.

Last year, Cabrera endured some simply awful counting cat numbers (only 25 runs), his extra base pop never looked worse, and his on-base skills have been in free fall since 2019. Hell, he walked just 6.5 per cent of the time, looking like a shell of the OBP beast he was not so long ago.

But let’s give the dude a break. He’s battled back issues since 2017, and he’s never really been the same since — especially power wise. Cabrera posted 10 seasons of at least 30 homers between 2004 and 2016, but hasn’t topped 16 in a year since.

And while so much ink has been spilled about how Comerica Park took away from him over his prime years, we’re not sure that’s completely fair. Miggy recorded a 942 OPS in 1,000 career games in Comerica which compares very favourable to his 908 career mark.

But whether the park restricted his ability to post even more monster numbers or didn’t, it’s still truly amazing to see where he ranks among the all-time leaders in various statistical categories (again, not that you needed numerical proof that he’s a Hall of Famer, but it’s fun to quantify his place in history regardless).

Cabrera is currently 32nd all time in games played, just one shy of 2,700, which will tie him with Graig Nettles. With 56 more at-bats, Cabrera will match Rabbit Maranville (you don’t get to type that name everyday) for 27th place in history.

Okay, so we get it. Cabrera, who will turn 40 early next season, has played a long time. But how does he fare in the counting categories?

Well, with 1,530 runs, he’s 61st all-time, just two shy of matching Frankie Frisch and only 20 away from becoming the 57th player ever to score 1,550 times. Hits is where Cabrera really shines, however. He’s currently in 24th place, just one behind Ichiro Suzuki and 22 back of Winfield, who we compared him to up top to begin this exercise.

Cabrera is even higher on the all-time list of two-baggers, currently in 14th place, 17 behind Hank Aaron. On the home run list, Miggy is just two bombs behind Gary Sheffield for a share of 26th place, with 23rd place well within reach.

The former Marlin and current Tiger great is just three ribbies shy of becoming the 14th player ever to drive in 1,850 runs and 13 away from tying Mel Ott. Looking further up the list, passing Cap Anson at No. 12 is very achievable for Cabrera before he hangs ’em up.

Now that we have a better sense of his place in history, what can we expect for Cabrera’s swan song this season?

Well, not surprisingly given his recent showings, the projections are not bullish on a recovery. Fangraphs expects Cabrera to get 74 hits in 300 at-bats and score 31 runs while driving in 34. He’s projected to put up 11 doubles, one triple, seven homers, one steal (zero times caught) and a BB/K of 23/79. Miggy’s expected slash line is: .248/.305/.358.

So, in a nutshell, not good. In fact, you’d be hard pressed to find a place for Cabrera among the top 40 designated hitters, rendering him pretty much useless for Fantasy purposes outside of perhaps the very deepest of AL-only leagues.

If you do decide to carry Miggy for his farewell tour, you’re probably only doing it as a sign of respect to a man that was an absolute Fantasy stud for so many years. And if you extract pleasure out of doing that, who are we to say you’re wrong?

American instrumental band Hot Butter was active between 1971 and 1978. A 1972 cover of “Popcorn” was the band’s biggest hit, and the B-side from this single is “At the Movies.”

The Wire Troll: Nikita Zadorov Filling Cracks for the Flames

Even if Pastrnak has been extremely fortunate with his puck luck this season, Zacha is sure to benefit, and we’ve seen that lately, with seven points over the last six games. Taken sixth overall in 2015, Zacha has taken some time to fully develop, but now that he has, Fantasy owners would be wise to take advantage.

By RotoRob
Posted in HOCKEY, RotoRob, The Wire Troll | Comments Off on The Wire Troll: Nikita Zadorov Filling Cracks for the Flames

Sure enough, Powell played a season-high 33 minutes on Friday, and while the production wasn’t eye-popping, he still flirted with a double-double while recording a pair of steals. His PT has been rising all season, so we’re curious to see what he’ll do when consistently getting 30+ minutes per game. Powell is still mostly a full-time starter, but not necessarily used to the same load he was before his Achilles’ injury a few years ago. Consider him a deep league option with some possible upside in standard formats.