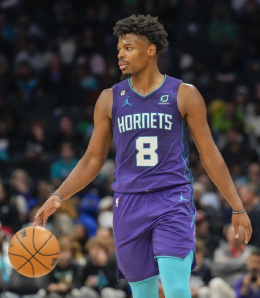 Dennis Smith Jr. could prove quite useful for a while. (Jim Dedmon-USA Today Sports)

Welcome back to another week of Fantasy basketball. With January nearing its completion, we are now well past the season’s halfway point. Check your waiver wire for goodies!

This week, Boston shook off a turnover prone effort by Jayson Tatum to exact some revenge against the Warriors; Ben Simmons‘ tough season continued with an ejection on Thursday; and Dallas has lost its second leading scorer and rebounder (see below for the Fantasy opportunity this injury presents).

Dennis Smith Jr., PG, Charlotte Hornets (ESPN: 16.4 per cent; CBS: 30 per cent): We pimped Smith in late-October when Terry Rozier was out, and we’re back to give him another nod with LaMelo Ball (ankle) out day-to-day. Since we first looked at Smith, his PT dipped in November before being sidelined for 18 games with an ankle injury. Since his return, he’s done a better job of getting to the line, but is likely available in smaller leagues and worth a look for however long Ball is hurt (note that Ball is listed as doubtful for Saturday). Smith is sinking more treys this season, and he’s been more efficient in terms of protecting the rock, given the substantial decrease in the team’s turnover rate when he’s on the court. There’s tremendous athleticism here, but he remains a liability on D (mind you, he’s better than most of the Hornets in this regard). Still, we like the aggressiveness Smith showed against Al Horford on Monday (see video below), so would like to see what he’ll do with some extra burn.

Dwight Powell, C, Dallas Mavericks (ESPN: 0.6 per cent; CBS: 1 per cent): Powell has never been quite the same since that awful injury he suffered in 2019-20, but every now and then he flashes a little something-something to remind us what he can do (10 points in 17 minutes on Sunday). However, now that Christian Wood has a broken thumb and Maxi Kleber (hamstring) remains out for another a few weeks, Powell will get more burn. Sure enough, Powell played a season-high 33 minutes on Friday, and while the production wasn’t eye-popping, he still flirted with a double-double while recording a pair of steals. His PT has been rising all season, so we’re curious to see what he’ll do when consistently getting 30+ minutes per game. Powell is still mostly a full-time starter, but not necessarily used to the same load he was before his Achilles’ injury a few years ago. Consider him a deep league option with some possible upside in standard formats.

Hamidou Diallo, SG/SF, Detroit Pistons (ESPN: 1.1 per cent; CBS: 7 per cent): Trying to get a jump on players who could benefit from trade deadline moves? Then you might want to consider that when/if Bojan Bogdanovic gets moved, Diallo stands to gain big time. It was just under a year ago that we last picked Diallo, and the results were mixed as he sunk more threes in February, but experienced a big PT drop off in March before a finger woe ended his season. However, look at what Diallo is doing recently with limited minutes: 17 points on 7-for-8 shooting in 21 minutes on Thursday with four straight games of at least 12 points in the previous week. His shooting keeps improving as the season progresses, and even though his role is currently capped, there’s clearly potential waiting to explode after the Pistons free up enough minutes for him. Diallo makes for a great stash in standard leagues and fine current play in deep formats.

Bob Dylan is without a doubt one of the greatest songwriters in musical history. Here’s the second single from his country album, Nashville Skyline, “Lay Lady Lay,” a track covered by many over the years (including such diverse acts as The Byrds, Duran Duran and Ministry).

Jones is capable of driving the ball, has strong playmaking skills, can pitch in with steals, and has flirted with double-doubles in three of his last four games. Yes, he’s mostly been a backup this season, but has still managed to enjoy his finest scoring campaign to date.