Don’t Give Up On Pierre Yet 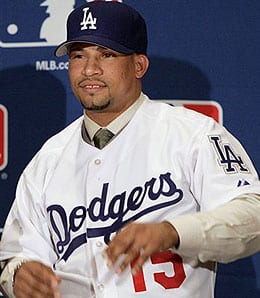 Rafael Furcal is starting to awaken from his slumber.

The Los Angeles Dodgers hammered the struggling New York Mets in the rubber match of their three-game set Thursday night at Citi Field for their third straight series win. Baseball’s best team has slowed down somewhat lately, but the Dodgers have retained a healthy lead in the NL West. While San Francisco, Colorado and especially Arizona have all played well lately, it’s going to take a miracle second half for the Giants or Rox to catch LA, and the D-Backs’ first-half hole is way too large.

Despite the loss for 50 games of Manny Ramirez, the Dodgers have enjoyed a remarkable season, riding great balance (first in batting and OBP and also first in BAA, OPS against, saves and WHIP) to a 100+ win pace. If there’s a concern, it’s the fact that with just 35 quality starts by the rotation to date (second worst in the NL), the NL’s best bullpen has been forced to work extremely hard in the first half. Will that be a factor down the stretch?

The return of Manny has sent Juan Pierre back to his fourth outfielder role, but kudos are in order for a player who did a superb job as the lead-off man for the best team in baseball. We recommended him a couple of months ago and those who heeded our advice were likely very happy with their investment. However, Pierre’s now being dumped en masse in mixed leagues, and so he should be. But don’t be so quick to rid yourself of him in an NL-only league, even though he had been slumping for a while. The dude is enjoying a career year, percentage-wise, he has hit well in a part-time role in the past week and you know he’s an asset with the speed (second in the NL in swipes). Hell, Pierre’s even showing a bit more extra-base pop than he has in a couple of years while his strike zone judgment has improved for a third straight season.

If Rafael Furcal has been dropped in your league – and there’s a chance he has if it’s shallow enough – you must pick him up immediately. Thursday, Furcal exploded for three hits – including a pair of doubles – three runs and a walk for his third multi-hit game in the past four tries and fourth in six games. Furcal bottomed out in May, but showed signs of life last month, and has been absolutely on fire so far in July (1176 OPS with nine runs, already matching his total from June and May). Obviously Furcal’s been a huge disappointment this season – especially in the stolen base department – but he’s starting to hit again, and that’s definitely worth considering with a half a season to go.

The Dodgers jumped on the Mets right away Thursday, scoring four runs in the first, highlighted by a three-run double from Orlando Hudson, who came in stuck in an awful 2-for-32 skid. Hudson got off to a great start, but has slipped since then, and is even starting to get dumped in some shallow leagues. His OPS by month: 948 in April, 818 in May, 612 in June and 417 in July. It’s a worrisome trend, and while the big hit was nice, he had to leave early after getting hit by a pitch in the knee. Hudson, who was dropped to seventh in the order for the first time this season, should be fine, but if he’s forced to miss some time, he may start winding up on even more waiver wires. Hudson has almost matched his run total from last season, but his overall numbers are down thanks to reduced power and a batting average that’s 20 points off last season’s pace. This is too good a hitter to continue struggling; if Hudson becomes available in your league, he’s worth the gamble of plucking him up.

James Loney was back at first for the Dodgers Thursday after sitting the night before against Oliver Perez, a pitcher he’s traditionally struggled against (1-for-8, no extra-base hits, three Ks), and he came through with a double, two runs and three walks as his hit streak has reached eight games. While I wouldn’t say he’s blazing now (just one of those eight games has resulted in multiple hits), there’s no doubt that’s this traditional second-half player is starting to pick up the pace. In leagues in which Loney’s been dumped (are they’re out there), he’s worth another look. It’s been a frustrating season for his owners, who saw Loney jump out of the gates with a big April (811 OPS) only to slump in May. He was slightly better in June, but is looking very strong this month as he gears up for one of his patented tease-you-with-a-big-second-half finish. We ranked Loney as the 15th-best first baseman heading into the season, and we haven’t been that far off, as he’s probably been a top 20 player at this position. But if he continues to shine, he’ll likely reach or surpass our expectations, so is a decent buy-low candidate. A word of caution, however: if you are hoping for power here – and who isn’t when selecting a first baseman? – you’ll be disappointed. Loney’s pop continues to dissipate, with the following IsolatedPower numbers during his four big league seasons: 275, 206, 145, 116. Sure, he just turned 25 a couple of months ago, so is still ostensibly two years from his power prime, but I just don’t see it happening for Loney. I love the development he’s shown in his batting eye – a great indicator for future success – but again, where are the results to follow? Like I said, Loney is a frustrating player to own, because he continues to tease us with that possible breakout – and it may very well still happen as there is upside here – but at what point do we get fed up waiting?