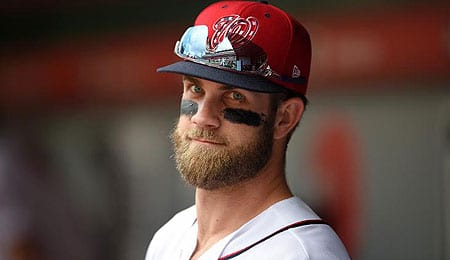 Bryce Harper could nab a deal as much as $400 million. (The Greedy Pinstripes)

The chase for free agent Bryce Harper seems to be down to three teams: the Phillies, the Dodgers and the White Sox. You’ll notice the Yankees are not one of the finalists (see video below for analysis on whether they are in fact interested in him or not).

We’re not going to try to hedge our bets on where he’ll land; we’ll leave that to our readers that love a good wager. No, we’re going to stick to what the winning team will be getting in Harper — both the good and the bad that comes with him.

For starters, at the beginning of September, we expressed concern with his strikeout rate, even though he had just wrapped up a really big month.

Harper wound up whiffing nearly a quarter of the time, and while he did jack up his walk rate, a sub-.250 BA for the second time in three years has to be cause for worry for his both his Fantasy owners and his prospective employers.

Still, there’s really no indication of which way Harper is leaning, even if ChiSox fans are drooling at the prospect of their team signing him. The Phillies remain the apparent favourite, and if not them, the Dodgers seem most likely. But yes, the Pale Hose are truly in the mix, and the team has the money to make it a reality.

But beyond any performance concerns, what about Harper’s attitude? No team can make this kind of investment and turn a blind eye to the history of issues that have surrounded him. Early in his career, his maturity and professionally were questioned by those close to the Nats, especially after he failed to run to first base — an episode that so irritated then manager Matt Williams that he benched the youngster.

Of course, we all remember what happened very publicly in 2014 when Harper so enraged teammate Jonathan Papelbon that the two came to blows and the veteran reliever would up wrapping his hands around Harper’s neck in a Homer-strangling-Bart moment. Only this was no animated television show. This actually happened, and was caught on camera for the world to see.

Those character issues aside, let’s talk about what Harper can do on the field.

This season, he stayed healthy enough to set a career high in at-bats (despite drawing a career high 130 walks), but his ISO dipped. It was still excellent, just not as good as the year before, despite the fact that he should be heading towards his power prime. Shockingly, 2018 marked his first 100-RBI season, but overall he wasn’t as effective (wRC+ of 135) as he’d been in 2017.

All told, Harper earned 3.5 WAR — the fifth highest total of his seven-year career. Does the equivalent of 3.5 wins sound like it’s worth it when you’re looking at doling out at least $300 million (probably closer to $400 million)? If we’re talking about the 2015 version (9.3 WAR), that’s an easy call, but which Harper are you going to get?

Let’s assume the White Sox land him. Dynasty league owners should note that Harper will be moving from one of the best hitter’s parks in the majors to one of the worst, and that could hurt his BA even more. His power would also be greatly affected by such a move; Nationals Park ranked No. 5 in terms of homer rate in 2018, while Guaranteed Rate Field was in the bottom half.

So while there may yet be developmental growth in his game given his still tender age, and some BA bounce back should be expected based on a lower than usual BABIP (.289), much of that may be negated by the park factors. Harper hit 34 bombs last year, a number beefed up a bit by a higher than usual HR/FB rate, so even considering more natural growth as he enters his power prime, some of that may be reversed by a slight HR/FB rate regression and the dramatic park factor difference.

With or without him, the White Sox are still about two years away from turning the corner into contention. It would be fascinating to see how the fiery Harper reacts to being in a losing environment.

The bottom line is that while he would pay dividends for the White Sox in terms of accelerating the rebuilding process, it may ultimately be a contract that will be tough to justify over its final few seasons.

French singer-songwriter Alain Souchon has been around forever, churning out 15 albums since his debut in 1971. From his 1999 album Au Ras Des Paquerettes comes “Rive Gauche” (translated in English as “Left Bank.”

Now it’s your turn. Let us know in the comments below where you think Harper will land and how he’ll perform there.

The offense is weak (only three teams have scored fewer runs) and the pitching staff (despite somehow having the fourth most quality starts in the majors) is near the bottom thanks to an awful bullpen.