Fantasy Notes: How Lowe Can You Go? 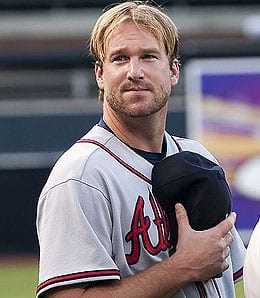 The New York Mets are turning things around, having won three of four against the Cubs at home this week to keep pace in what’s looking like a very competitive NL East. Now the Mets have a chance to go right after the third-place Braves, who come to Citi Field for a three-game set this weekend.

Unfortunately for New York, Atlanta has pretty much owned the Mets lately. Last year, the Braves won 13 of the 18 games, taking seven of nine in New York. Overall, Atlanta has beaten the Mets eight straight times including the past five at Citi Field.

For the Braves, it’s all been about offense – or lack thereof. Only three NL teams have a worse OPS than Atlanta’s 689 mark, but fortunately, one of them is the Mets. This series could be starved for runs, meaning Fantasy owners of Atlanta or New York hitters may be unhappy, but owners of their pitchers could be in store for a sweet weekend.

Atlanta is kicking off a seven-game road trip Friday; after it’s done in New York, it heads to St. Louis to take on the Central leading Cardinals. By next weekend, the Braves – losers of two straight and three of their past five – could easily find themselves in the NL East basement. If Atlanta is going to compete in this, Bobby Cox’s last hurrah, it better snap out of it soon.

And the Braves will need sharper pitching performances than Derek Lowe has supplied so far. Somehow, he only suffered his first loss of the year Thursday night, yet three of his four starts have been substandard. Lowe’s first season in Atlanta was a disappointment, and so far this year, things have gone from bad to worse, despite his 3-1 mark. His command has never been worse than what he’s shown so far, and at this point, he’s a very shaky play in mixed leagues.

Worse yet, he doesn’t get to face the Punch and Judy attack of the Mets in this series, instead getting a better-hitting Cardinals lineup his next time out. Even in Lowe’s one quality start this season, he walked seven in six innings – hardly what anyone would call sharp. There’s a reason we dropped Lowe all the way to 80 in our most recent pitcher rankings, and even though that came out just a week and a half ago, I suspect the sinkerball would sink even further in the rankings today.

If you’re looking for good news out of the Braves camp, look no further than Chipper Jones’ play of late. He’s hit safely in four straight games, doubling in each game and recording multiple hits in three of them. While we’re still waiting for his power to return, the fact that he’s scored 10 runs in a dozen games is a nice bonus. He’s also back to drawing plenty of walks, which is a great sign that Chipper is putting last season’s nightmare second half behind him. Jones remains a must-own third baseman.

Rookie Jason Heyward is going through the first slump of his career, a 2-for-14 skid the past five games. Despite the lack of hits, he’s still managed one homer and four RBI during this stretch, so it’s not as if he’s not contributing at all. Regardless, the Braves look like they made the right call keeping this 20-year-old in the majors. Through his first 15 games, Heyward has proven he’ll take a walk (10) and no one can quibble with his 955 OPS. Can you say NL ROY? Tommy Hanson was denied the award last season, but the Braves have a great shot to have one of their youngsters take home some hardware this year, based on the early returns. There’s a reason we ranked Heyward among the top 35 outfielders in the game this spring.

I’m also loving what I’ve seen so far from second baseman Martin Prado, who lashed another three hits Thursday. He’s taken his game to a whole new level and is currently tied for second in the NL in batting. Prado is going to score a crapload of runs batting near the top of the Braves’ lineup.

The same can’t be said for Prado’s double play partner, Yunel Escobar. He doubled Thursday to avoid falling below the Mendoza line, but with just two multi-hit games to his credit so far, Escobar has been an early-season disappointment. He’s even beginning to get dumped in more shallow mixed leagues. Before you even think about cutting bait, however, note that Escobar has been a much better second half player in his brief MLB career, so be patient. He definitely has more pop than he’s shown so far, and I do expect him to rebound over the course of the season. Whether he’ll wind up as the top 10 shortstop we ranked him as prior to the season remains to be seen, but you have to know he’s better than he’s shown so far, which is barely a top 30 SS.

An even bigger disappointment so far has been Melky Cabrera. He took another 0-fer Thursday, but at least he drew a walk and scored. Still, there’s a reason he’s lost his lead-off job and is losing PT to Matt Diaz. At this point, Cabrera is only worth owning in a somewhat deep NL-only league. But do note that his batting eye has been fantastic; expect that to translate into a much higher batting average soon.

Meanwhile, Omar Infante, who also walked and scored Thursday, is not worth owning in pretty much any format. After a solid first season in Atlanta, Infante’s extra-base pop has disintegrated in each of the last two years. Granted, he spent a huge chunk of last year on the DL, but there’s no excuse for his sluggish performance this season.

By RotoRob
Tags: Derek Lowe
Posted in BASEBALL, Fantasy Notes, RotoRob | Comments Off on Fantasy Notes: How Lowe Can You Go?