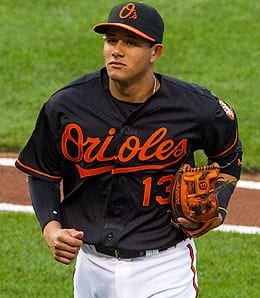 Welcome back to another of our 2016 Fantasy baseball cheat sheets. Need a shortstop for your Fantasy baseball team? While you wonder how Yulieski Gurriel will do as a major leaguer, we look at who we expect to be the top 45 players at the position for the remainder of the season. Special thanks to JB (@JBsFantasyHelp) for his excellent work with the rankings.

1. Manny Machado, Baltimore Orioles (14 at 3B): Machado has already surpassed his doubles total from last season as his extra-base power continues to develop into elite status. He just needs to be careful about injuring his teammates during celebrations (see video below). Machado also qualifies at Third Base.

2. Carlos Correa, Houston Astros (NR): Correa has clearly established himself as one of the top young studs in the game.

3. Corey Seager, Los Angeles Dodgers (44): Yes, Seager’s BABIP is very high, but it was even higher last year in his time in the majors. This guy looks ready to be one of the top hitters in the game in 2017.

4. Xander Bogaerts, Boston Red Sox (13): One of the players that is leading the next golden age of shortstops, Bogaerts has turned many of his doubles into home runs this season.

5. Francisco Lindor, Cleveland Indians (32): Lindor is not only hitting brilliantly, but also ranks second in the majors in defensive WAR this season.

6. Ian Desmond, Texas Rangers (3): Desmond has been pretty durable in his career and it’s nice to see his speed and power bounce back this season. He also qualifies at Outfield.

7. Jonathan Villar, Milwaukee Brewers (43): Villar has been one of the most valuable Fantasy assets this season and given his status heading into the year, is a definite candidate as the 2016 Fantasy Stud of the Year.

8. Troy Tulowitzki, Toronto Blue Jays (1): Colorado’s 2005 first round pick has been better for the Jays this season, but has still been unable to come close to duplicating the numbers he had with the Rockies.

10. Brad Miller, Tampa Bay Rays (27): We gave Miller some love last month, and he’s done nothing to disappoint, scoring 15 runs in July and doing a brilliant job of getting on base so far in August. He also qualifies at Outfield.

12. Eduardo Nunez, San Francisco Giants (45): Nunez is striking out a bit more this season, but that hasn’t stopped him from enjoying the finest campaign of his career. He also qualifies at Third Base.

13. Brandon Crawford, San Francisco Giants (24): Crawford recently became the first player to record a seven-hit hit since 1975 and has managed to prove that last season’s breakout was no fluke.

14. Marcus Semien, Oakland Athletics (28 at 3B; 17 at 2B): Semien’s doubles have become homers this year; small wonder he’s turned into a DFS darling.

15. Jose Ramirez, Cleveland Indians (26): Ramirez is racking up the steals as part of a big breakout season this year. He’s also listed in our Second Base Rankingshttps://rotorob.com/2016/08/02/2016-rotorob-rest-of-season-second-base-rankings/ while also qualifying at Third Base and Outfield.

16. Eugenio Suarez, Cincinnati Reds (47): Suarez is another player that is finding his doubles becoming homers this season. He’s also running more, but isn’t particularly successful at that part of the game. Suarez also qualifies at Third Base.

18. Jhonny Peralta, St. Louis Cardinals (12): Peralta usually hits for a decent average, but is struggling to make contact this season. He also qualifies at Third Base.

19. Zack Cozart, Cincinnati Reds (31): The Reds’ second round pick in 2007 showed a lot more power last year, but that’s slid somewhat this season. Cozart is currently day-to-day so check his status before considering him.

20. Starlin Castro, New York Yankees (5): This Dominican’s first season in New York has been a success, as he’s already set a new career high in home runs. Castro is also listed in our Second Base Rankings.