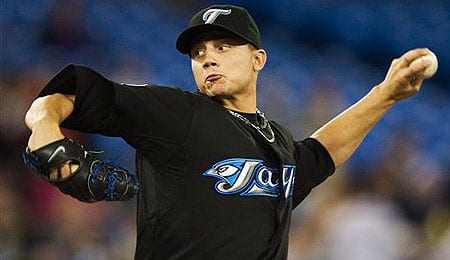 An adjustment in his pitching motion has worked wonders for Brett Cecil.

It has been a frantic week to say the least. Hunter Pence can now call Philadelphia home. The Jays landed Colby Rasmus and, in perhaps in the biggest shock of the week, the Indians landed Ubaldo Jimenez for a package of top prospects that includes Alex White. Even the Pirates made a move, securing veteran Derrek Lee to provide an upgrade (sort of) at first base over the struggling Lyle Overbay. Can anyone remember the last time the Indians and Pirates were buyers at the trade deadline, especially in the same year?

The Twitterverse has been working overtime, fueling the constant rumour mill. Just a thought, but if there was a one dollar charge for every false rumour reported through Twitter last week would it solve the current budget crisis south of the border? Without further ado, let’s take a look at this week’s Troll picks.

Hideki Matsui, OF, Oakland Athletics (CBS: 22 per cent owned, Yahoo!: 18 per cent): The Athletics signed Matsui in the offseason, hoping for middle of the order power production. After a horrible first half, he’s finally finding his stroke. Since the middle of July, he’s 24-for-52 with three homers and 17 RBI. Godzilla has returned!

Brett Cecil, SP, Toronto Blue Jays (CBS: 17 per cent owned, Yahoo!: 8 per cent): Since his return from Triple-A Las Vegas and a tweak in his pitching mechanics we’ve seen a new and rejuvenated Cecil in Hogtown. Four of his past five starts have been solid and he’s coming off back-to-back wins against the powerful Rangers offense — including a four-hit shutout in Arlington last Sunday. In 37 IP in July, Cecil has allowed 33 hits, nine walks and only nine earned runs while striking out 27 on his way to three victories. A trend has developed that shouldn’t be ignored.

Lucas Duda, OF, New York Mets (CBS: 11 per cent owned, Yahoo!: 2 per cent): Carlos Beltran is now a Giant, leaving Duda as a full-time outfielder for the Mets. This season at Triple-A Buffalo the 25-year-old smacked 10 homers with 24 RBI and a great .302 BA in 129 at-bats. In a combined two levels in the minors last year, he hit 23 homers in 425 at-bats. Duda will be a full-time player for the duration of the campaign and with his power potential, he should be owned in all formats.

Jon Jay, OF, St. Louis Cardinals (CBS: 28 per cent owned, Yahoo!: 11 per cent): The departure of Rasmus combined with Lance Berkman’s rotator cuff strain should guarantee full-time at-bats for Jay for the rest of the season. In 273 at-bats so far, Jay has seven homers, 27 RBI, five thefts, and a great .311 BA. He will provide you with decent across-the-board production and offer solid value as a fifth outfielder in any format.

Dee Gordon, SS, Los Angeles Dodgers (CBS: 15 per cent owned, Yahoo!: 2 per cent): In a deal that is expected to be made official Sunday, Rafael Furcal is on his way to the Cardinals. Welcome back, Dee Gordon! He didn’t look out of place in his first go-round with the Dodgers and has absolutely raked at Triple-A since he was sent back down. If your need is both speed and filling a rather weak middle-infield slot, Gordon could be the answer to all your problems (well, maybe not for your Gummy Bear addiction…).

Jason Bourgeois, OF, Houston Astros (CBS: 22 per cent owned, Yahoo!: 9 per cent): Bourgeois’s 20 stolen bases in only 119 at-bats should have your attention. He’s also scorching the ball to the tune of a .358 BA. The trade of Pence should resolve playing time opportunities, making Bourgeois a great addition if you’re looking to make quick point gains in the stolen base category.

Josh Reddick, OF, Boston Red Sox (CBS: 45 per cent owned, Yahoo!: 16 per cent): We recommended Reddick four weeks ago, but recent developments in Beantown necessitate giving him another plug. J. D. Drew was already losing playing time to Reddick and is now on the DL with a left shoulder impingement. Unless the Red Sox make a move before the trade deadline, Reddick is likely to receive the bulk of the playing time down the stretch. If he’s still available in your league this could be your last opportunity to secure his services.

Jake McGee, RP, Tampa Bay Rays (CBS: 7 per cent owned, Yahoo!: 8 per cent): Since being recalled in mid-July, McGee has made seven appearances, allowed three hits, three walks and only one earned run in five innings with seven punchouts. Don’t be surprised to see McGee work his way into the mix for saves before the year is done.

David Ross, C, Atlanta Braves (CBS: 9 per cent owned, Yahoo!: 6 per cent): In a tough blow to Fantasy owners, Brian McCann hit the DL last week with a strained left oblique. Ross will handle the bulk of the catching duties in Atlanta for the next 2-to-3 weeks while McCann is on the mend and should be an immediate addition in both NL-only and two catcher leagues. The dude has some serious pop.

Yonder Alonso, OF, Cincinnati Reds (CBS: 13 per cent owned, Yahoo!: 2 per cent): The Reds traded Jonny Gomes to the Nats on Tuesday and called up top prospect Alonso. Other than three pinch hit appearances, he’s been riding the pine so far. Chris Heisey is the current favourite of Dusty Baker, but with Alonso slugging 12 homers and driving in 56 at Triple-A Louisville, we’re betting that will change.

J.D. Martinez, OF, Houston Astros (CBS: 2 per cent owned, Yahoo!: 0 per cent) The 23-year-old was called up from Double-A Corpus Christi to replace Pence on the roster. Bourgeois will likely get the majority of at-bats in the ‘Stros revamped outfield but now that Michael Bourne has also been dealt, look for Martinez to get some opportunities as well and he should provide some value in NL-only formats.

Collin Cowgill, OF, Arizona Diamondbacks (CBS: 12 per cent owned, Yahoo: 0 per cent): The D-Backs called up Cowgill Tuesday and so far he’s 0-for-11 and struggling. However, at Triple-A Reno the 25-year-old hit 13 homers, drove in 70 runs, swiped 30 bags and amassed an outstanding .354 BA. There are better options currently available to fill your outfield needs in redraft leagues, but don’t shy away from the youngster in both Dynasty and NL-only leagues.

Jerry Hairston, Jr., 2B/SS/OF, Milwaukee Brewers (CBS: 2 per cent owned, Yahoo!: 2 per cent): The Brewers were dealt a serious blow last week, losing Rickie Weeks for 3-to-6 weeks with a severely sprained ankle. In an attempt to fill the void the Brewers traded for veteran utility man Hairston. In NL-only leagues, his combination of moderate power and average with the odd theft should be an asset.

Eric Surkamp, SP, San Francisco Giants (CBS: 1 per cent owned, Yahoo!: NA): In his last two starts, Barry Zito has reverted to being, well, Barry Zito. Meanwhile, Jonathan Sanchez is still rehabbing his injured left biceps and Madison Bumgarner has been a model of inconsistency. Surkamp has enjoyed an amazing year at Double-A Richmond and is next-in-line at a shot in the Giants’ rotation. The 24-year-old strikeout machine should be owned in all keeper formats and on the radar in NL-only and deeper mixed leagues.