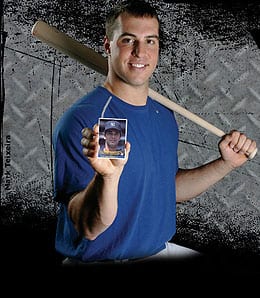 Mark Teixeira grabbed the huge Yankee bucks in the hopes of following in Don Mattingly’s footsteps.

And we’re back with more of the 2009 RotoRob MLB Draft Kit, today with the next set of cheat sheets, this one ranking the top first basemen in the game. Tim has been spouting all offseason that first base isn’t the position of abundance this year that it once was, so don’t wait too long to pluck someone at this position or else you may get stuck with a very undependable option like Todd Helton.

1. Albert Pujols, St. Louis Cardinals: Despite ongoing concerns over his elbow that did ultimately cause him to miss some time, Pujols reached 100 runs for the seventh time in eight years and put up perhaps his finest overall season. So much for those pre-season worries that he wouldn’t make it through the year. In the end, Pujols put together an MVP season – although some question whether he deserved the hardware. In the end, Phat Albert did need surgery in the offseason, and while he’s fully healthy now, he wisely opted to skip the WBC to focus on the regular season (although insurance issues made his decision simple).

2. Miguel Cabrera, Detroit Tigers: Huge things were expected from this durable slugger when he joined the powerful Tigers last offseason. He was to be the jewel of a lineup guaranteed to score over 1,000 runs and laugh its way to a World Series title. Well, none of that transpired, and many were disappointed in Cabrera’s season. But take a look at his second half numbers and remember that he still set career highs in homers and ribbies during an “off” year. You better not sleep on this stud, who, at 25, is still a couple of years from his power prime. Think he’ll even make it to you at eighth overall? Think again. Looking for serious productivity to anchor your fantasy team? Cabrera is your man.

3. Lance Berkman, Houston Astros: This on-base machine rebounded from the worst season of his career in 2007, adding some speed to the mix to put together a near-MVP type season in 2008. This 33-year-old slugger should have a couple of seasons left near the top of this list.

4. Mark Teixeira, New York Yankees: Teixeira’s power slipped a bit in Atlanta, and when the Braves fell out of the race, they dealt him to the Halos. Once in Anaheim, Teixeira went berserk, and wound up recording a career best in OBP. That lured the Yankees into giving him $180 million to help beef up the offense as part of their major off-season spending spree.

5. Ryan Howard, Philadelphia Phillies: Howard has been slipping offensively since his MVP 2006 season, but he remained healthy last year and set career highs in a couple categories. Despite an OPS that’s been slipping tremendous the past couple of seasons, how do you overlook what an incredible run producer Howard is, not to mention the fact he led the majors in dingers last year? Once offensive studs like Grady Sizemore and Cabrera are gone, RyHo makes an excellent first round pick to anchor your offense.

6. Justin Morneau, Minnesota Twins: Morneau has done a great job of making better contact in recent seasons, something that allowed him to rack up a second .300 season last year. Although his experience at the WBC with Team Canada was a major disappointment, you can’t argue that Morneau is not only one of the AL’s top sluggers, but he’s become a much better gloveman at first as well. Target him with a second round pick.

7. Adrian Gonzalez, San Diego Padres: Gonzalez’s development as a slugger has been truly impressive, and given that he hasn’t even yet hit his power prime, I wonder if there’s a 45-homer season in that bat of his. His superb performance for Mexico at the WBC suggests another big year is on the way.

8. Prince Fielder, Milwaukee Brewers: Sure, his power dipped last season, but that was mostly due an even worse start than he traditional has. Fielder’s second half numbers and his upside (not to mention slimmed down body) suggests to me he’ll bounce back this season. A key component of Milwaukee’s youth movement, the Brewer cleanup hitter has more dingers over the past two years than anyone in baseball not named Alex Rodriguez or Ryan Howard.

9. Kevin Youkilis, Boston Red Sox: Youkilis has been fairly durable the past few seasons, and has developed into a top run producer while maintaining his superior on-base skills. Strangely, however, the Greek God of Walks has experienced a decline in his walk rate three years running. But don’t fret; as Youkilis has become more aggressive, he’s also become a better ballplayer, to the point where he’s now the clean-up hitter for USA’s WBC entry. A slam-dunk keeper, Youkilis’s multi-position eligibility only makes him more valuable.

10. Joey Votto, Cincinnati Reds: Votto enjoyed an excellent rookie season, building on his prospect status by showing improved patience at the plate. The Canadian kid could even develop into a decent basestealer, but this is an area of his game that needs work. Votto was awesome at the WBC, perhaps portending a big season, so don’t let him slide past the sixth round.

11. Carlos Delgado, New York Mets: Delgado silenced his critics, bouncing back from an offseason to prove he was still a patient hitter and top run producer. Possibly moving to the cleanup spot for the Mets this season, Delgado should cement his status as one of the top left-handed power bats of his time very soon, as he sits just 31 dingers shy of 500 for his career.

12. Chris Davis, Texas Rangers: Davis turned in a fine rookie effort, emerging as a power threat and showing potential as a serious run producer. Looking for a breakthrough candidate on this list besides Votto? Here’s your man.

13. Derrek Lee, Chicago Cubs: Lee has remained relatively healthy the past couple of seasons, but his 2005 power has never returned. He remains a decent run producer batting in the middle of a potent Cub lineup, but with his fading strike zone judgment, it’s obvious Lee’s best days are behind him. At this point, considering he’s no longer even a 30-home run man, you can’t afford to keep Lee at too high a cost.

14. Aubrey Huff, Baltimore Orioles: Huff made better contact last season, enjoying his finest season since 2003. His ability to dominate righties – he hit .321 with 26 homers in just over 400 at bats against them – made Huff a waiver wire stud last season, but don’t expect him to be on anyone’s wire this year. After mostly DHing in 2008 (although he spent enough time in the field to qualify at both third base and first base), Huff will take over first base in B-More for the departed Kevin Millar.

15. James Loney, Los Angeles Dodgers: Loney took over as the everyday first baseman for the Dodgers last year and showed gap power and run-producing potential. But he wasn’t as patient as normal and it’s become clear he’s not a power hitter. Still, Loney can help you at a tough position, so feel free to use a 12th round pick on him.

16. Carlos Pena, Tampa Bay Rays: Coming to Tampa Bay was the best thing that ever happened to Pena as, given a regular gig, he became extremely productive. It was no surprise he couldn’t duplicate his huge 2007, but even when he was slumping last season, Pena was still helping his owners with the long ball. Don’t expect any batting titles here, but if you need pop and a man who can get on base, Pena will be a huge help.

17. Paul Konerko, Chicago White Sox: Injuries killed Konerko’s value in 2008, although the fact that he walked more often and struck out less often suggests that his batting average will bounce back to normal career levels. He’s certainly looking healthier this spring, for what it’s worth.

18. Jason Giambi, Oakland Athletics: Giambi stayed healthier than he had in quite a while, responding with a much better year than 2007’s fiasco. His patience even came back a smidgeon. While we thought he might wind up in Toronto, Giambi is back to the scene of his greatest triumphs – Oakland – to help revitalize a moribund A’s attack. Don’t expect vintage Giambi, but it’s possible he could continue his recovery to an extent in the Bay area.

19. Mike Jacobs, Kansas City Royals: Jacobs enjoyed a strong season in Florida, although his strike zone judgment continues to deteriorate. Traded to KC this offseason, Jacobs faces more competition for the job, so I’m concerned about his long-term prospects. While he’s become a better power hitter, he’s sacrificed his batting average along the way, so as he transitions out of his power prime in a couple of years, Jacobs’ fall from grace could be swift and sharp.

20. Adam LaRoche, Pittsburgh Pirates: LaRoche’s power bounced back last season, although his average continues to dip ever so slightly. He got hurt in July and when he returned, we recommended him as a nice late-season power boost. We were bang on there, as LaRoche finished like a man possessed, batting .321 with seven homers and 26 RBI in September. Always a great second-half performer, LaRoche is a nice later-round choice if you need a corner infielder with some pop.

21. Billy Butler, Kansas City Royals: Butler failed to build on a somewhat productive rookie season, slipping in both average and power. Yes, he’s still just 22, so time is on his side, but he has a lot left to prove before he’s a slam dunk in the KC batting order. While Butler will earn time at both DH and first base, as mentioned, the Royals have plenty of players vying for those at bats, so this kid isn’t guaranteed anything if he doesn’t back up his solid second half (.305 BA, .476 SLG) with a nice start.

22. Todd Helton, Colorado Rockies: Helton struggled through 2008, fanning more often than normal before finally succumbing to back surgery. He’ll need plenty of rest, and is only expected to play maybe 100 games this year, severely limiting his potential value. Helton is getting on in years, and while his performance so far this spring is promising, he’s got a long road back to fantasy relevance.

23. Travis Ishikawa, San Francisco Giants: Ishikawa was productive in his limited PT last season, and is riding a big spring to the first base job in San Francisco. Now that the Ivan Rodriguez to San Francisco to play first base rumour can be laid to rest, it looks like the job is his.

24. Casey Kotchman, Atlanta Braves: Kotchman finally stayed healthy last season, but where did his power go? Things got especially bleak after a deadline deal sent him to the Braves. It’s still a bit early to give up on this once-can’t miss prospect, but the clock sure is ticking for Kotchman.

25. Kendrys Morales, Los Angeles Angels: Morales showed almost no extra-base pop in his limited opportunities last season, but he’s going to get a chance to start now that Teixeira bolted for the huge Yankee bucks. No pressure, dude. We’ve had very little reason to pay attention to Morales since he was a prospect on our list in 2006, but so far this spring, he’s smacking the ball around like he means it.