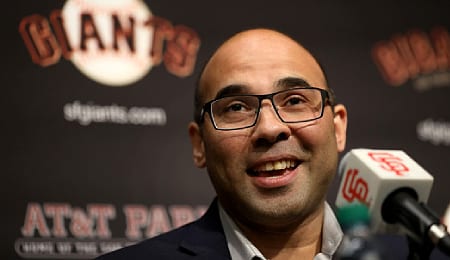 Farhan Zaidi was just the first step of the Giants trying to become the Dodgers. (Karl Mondon/Bay Area News Group)

With the L.A. Dodgers dominating the NL West in recent years, it only makes sense for the Giants to try to tap into that braintrust.

This process began last year when San Francisco hired former Dodger General Manager Farhan Zaidi to be the president of baseball operations (see video below), and then a couple of weeks ago, Gabe Kapler was tabbed as the new manager.

In taking over for Hall of Fame-bound manager Bruce Bochy, Kapler comes to the Giants after two ill-fated years as the Phillies’ manager. Before that, Kapler was director of player development for the Dodgers.

Well, he landed on his feet pretty well, but let’s hope for the Giants’ sake he has more success on the west coast than he did in Philly.

Wisconsin rockers BoDeans hit the scene in 1983 and are still going strong. Their debut album, Love & Hope & Sex & Dreams, came out in 1986 and the opening track was “She’s a Runaway.”

Now it’s your turn. Let us know in the comments below if you think the Giants are headed in the right direction with these moves.