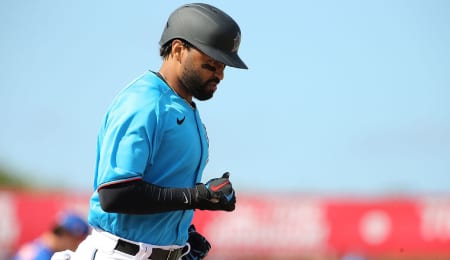 Once again, we found ourselves scouring over Baseball Reference similarity scores, this time perusing players akin to Hall of Fame great Dave Winfield. Lo and behold, the player most similar to Winfield’s career trajectory at the age of 31 was none other than Matt Kemp.

Kemp has sunk so far so fast that it’s easy to forget that a mere four years ago, he was on the same career path as an all-time great like Winfield.

Before MLB shut down, Kemp was in camp with the Miami Marlins, and doing his best to ensure he’d fail to win a job out of Spring Training (4-for-28).

Let’s remember that as recently as 2018, he was still an All-Star, putting up a very nice .290/.338/.481 slash line while staying healthy enough to see 506 plate appearances. Still, Kemp’s ability to hit the ball as hard as he used to has really diminished, and it’s only made worse by his recent trend of hitting the ball on the ground more often.

Once one of the top power-speed threats in the game, his stolen base prowess dried up long ago thanks to a combination of age and injuries. In fact, it was the season following his historic near 40-40 season in 2011 that health started to become a concern as we alluded to in a June 2012 podcast.

That year, his walk rate dipped after a career showing in 2011 and things got even worse in 2013, when he missed over half the season, really killing his counting numbers. Kemp stayed healthy in 2014, enjoying a solid bounce back as a result.

The Dodgers cashed in on that renaissance, trading him to NL West rival San Diego, where he wasn’t as effective in 2015, yet still managed his highest run total since his 2011 MVP season. The following year, Kemp’s contact rate dipped, but the power was up; at the deadline the Padres were able to flip him to Atlanta, where he excelled — putting up some sweet counting cats down the stretch.

Unfortunately, 2017 brought more injuries (fewest games played since 2013) and a corresponding drop in his effectiveness. Still, Atlanta was able to trade Kemp back to the Dodgers that offseason, and in staying healthier, his extra-base sock bounced back a bit.

That winter, he was traded again, this time to Cincy, where the wheels completely fell off last year. Kemp managed to play just 20 games before breaking a rib — and he never looked worse during that time. In the video below, you can see his only homer as a Red.

In early May, the Reds released him. Towards the end of the month, the Mets decided to give Kemp a shot, inking him to a minor league deal. He barely saw any action with their Triple-A team (hitting all of .235 in 34 at-bats) before getting released again in July.

That was the end of the line for Kemp for the 2019 season, but the Marlins reached out in December and gave him a minor league deal and invite to Spring Training.

As discussed above, he wasn’t exactly making the most of what could be his last shot, but the book is not yet closed. After all, remember how good Kemp was just two years ago; it’s hard to believe he has absolutely nothing left.

In the last five and a half years, he’s been traded four times and released twice — hardly the resume of a guy that was once on a Hall of Fame trajectory, right?

Currently, the Marlins look like they’re going to trot out a starting outfield of Corey Dickerson, Jonathan Villar and Lewis Brinson, with backup options including Matt Joyce and Magneuris Sierra. Garrett Cooper and Jon Berti are also capable of playing the outfield. Prospects Monte Harrison, Harold Ramirez and Jesus Sanchez are all pretty much MLB-ready, with J.J. Bleday, Connor Scott and Jerar Encarnacion not far from competing for big league jobs.

As a non-roster invite, Kemp is going to have to force his way into this picture. While it’s difficult to completely write him off, the odds look long. As a Fantasy option, with an ADP of 640, it’s clear Kemp is an afterthought at this point. You can safely ignore him until he forces you to do otherwise.

Meat Loaf sure had a powerful voice in his day. His first album, Bat Out of Hell, was a collaboration with composer Jim Steinman, whom he’d work with on a couple of albums over his career. “All Revved up and Nowhere to Go,” was originally written for a National Lampoon show and was one of the three tracks that was redeveloped for this album.

Now it’s your turn. Let us know in the comments below what expectations you have of Kemp for 2020.

Well, Fantasy baseball fans, we are now well and truly in the middle of crazy season. Trade rumours are flying around left, right and centre and Fantasy owners will be keeping a close eye on the future of various big name stars. With a few blockbuster trades expected in the coming months, the Major League Baseball landscape may be about to change dramatically.

The debate is over: Matt Kemp is worth a second round pick. As part of the 2009 RotoRob MLB Draft Kit, we wanted to present you with the results of our league draft. We’re still working away on the remainder of our cheat sheets, including our Master Keeper List, and our fifth annual top 40 […]