The Wire Troll: Cruz-ing for Saves 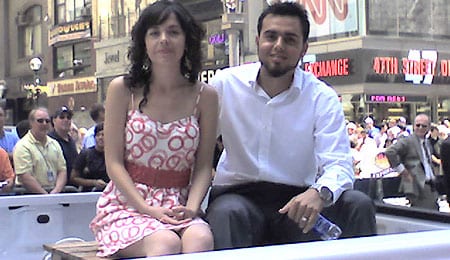 A shoulder injury to Joakim Soria gives him more time to spend with his hottie wife, but further muddies the closer waters for Fantasy owners.

This past week, the closer shuffling continued as Joakim Soria of the Royals hit the skids with tightness behind his right shoulder. B.J. Ryan finally hit the DL as we expected and Scott Downs seems to be the go-to guy for Cito Gaston and the Jays. Who is next on the list? Matt Lindstrom of the Marlins? After Friday’s debacle when he allowed four hits and three walks in 2/3 IP to go along with the seven — yes seven — earned runs, the leash in South Florida must be short enough to walk a runty Chihuahua.

It has truly been a rough start for catchers. Who would have thought that six of the seven top-ranked catchers would be either be struggling or hurt just three weeks into the 2009 campaign? This past week has seen both Ryan Doumit and Brian McCann added to the DL. Joe Mauer has yet to start a game in 2009, Geovany Soto is still struggling with a sore shoulder, Chris Iannetta is batting .139, and Russell Martin is still searching for that elusive first homer.

The only bright spot early on has been the rebound of Victor Martinez for the Indians who is off to a great start. For those fantasy managers that invested early in catching, it has been a tough start to 2009 as they have been constantly searching for adequate replacements. Several of the options we explore this week can provide some form of relief.

Brandon Wood, Los Angeles Angels, 3B: In a rather surprising move, the Angels called up Wood this past Tuesday. He was off to a fine 9-for-26 start at Triple-A Salt Lake with four homers and eight RBI. Mike Scioscia has indicated that Wood will have to earn his playing time and with only one at bat this week it really doesn’t look like that’s much of an opportunity. Wood’s power is definitely legitimate, however, it comes attached with a potentially low BA. Then again, how does he earn more playing time when he’s not given the opportunity in the first place? Maybe Scoscia could move Chone Figgins into the outfield as a replacement for the injured Vladimir Guerrero and insert Wood at third for a couple games? That would be a start. Why did they bring the 24-year-old Wood up in the first place? He is worthy of a pickup just for that enormous power potential in AL-only leagues, but keep in mind there is a good possibility he’s back at Triple-A before the ink is dry on this one.

Felipe Paulino, Houston Astros, SP: Okay, Paulino’s last start against the Brewers wasn’t exactly stellar, but at least he kept the walks down and other than the rough fourth inning when he allowed four runs, he has been pretty steady. I think what intrigues me with Paulino has been his ability to limit the walks with only two in 12 IP. The 25-year-old has struggled with control issues in the past, but if he can limit the free passes, the hard tossing righty could be an asset in all formats. Paulino is a solid pickup in NL-only leagues and should be on the radar for the next several weeks in mixed formats.

David Bush, Milwaukee Brewers, SP: Bush is coming of a stellar performance against the Phillies this past week. He took a no-hitter into the eighth inning before giving up a mammoth shot to Matt Stairs. There are no big surprises with Bush. If he is pitching well, he will give you a solid WHIP, low strikeout totals and win opportunities. This could be the start of the annual “let’s get the expectations up period,” so he’s worth a flier in all formats.

Chris Getz, Chicago White Sox, 2B: In the past week, Getz has gone 13-for-30 with five RBI, five runs scored and a couple stolen bases before missing Saturday’s start with a sore finger. He is currently listed as day-to-day. Getz’s minor league numbers suggest he’ll enjoy solid contact rates with moderate power potential and decent speed. This could translate into plenty of runs scored and as many as 20 stolen bases at the top of the order for the White Sox. Assuming that the finger injury is as minor as has been indicated, Getz should be rostered in all formats.

Phil Hughes, New York Yankees, SP: The ineffectiveness and ultimate landing on the DL of Chien-Ming Wang has opened up a spot in the Yankees rotation and the popular rumour has Hughes being recalled to start this coming Tuesday, something we predicted last week. Hughes is off to a great start for Triple-A Scranton/Wilkes-Barre, going 3-0 with a 1.86 ERA and 19 strikeouts in 19 1/3 IP. The 2004 first rounder is ready for his 2009 debut, but one note of caution: it would be prudent to remember that Ian Kennedy is also pitching the lights out down on the farm and could be another option for the Yankees. Hughes should be rostered in all formats heading into Week Four and if you have the bench space, Kennedy is also worthy of stashing away just in case.

Leo Nunez, Florida Marlins, RP: As we discussed above, Lindstrom’s leash is much shorter after his implosion Friday night. The 25-year-old Nunez, acquired from the Royals for Mike Jacobs this past offseason, has to be considered the next in line for saves for the Marlins. Nunez should be picked up in all formats and I wouldn’t be at all surprised to see him pitching in the closer role as early as next week.

Jason Jaramillo, Pittsburgh Pirates, C: The former Phillie farmhand has been thrust into the role of starting catcher for the Pirates for the next eight-to-10 weeks after incumbent Ryan Doumit suffered a wrist injury. Expect Jaramillo to produce moderate power and a so-so average as demonstrated by his eight homers, 39 RBI and .266 BA last season at Triple-A Lehigh Valley. Ryan Doumit he is not. Currently Jaramillo has been on somewhat of a tear, going 7-for-18 since assuming the full-time gig, but these are probably not sustainable numbers so temper your expectations. The free agent catcher ranks are getting rather thin, so Jaramillo is a solid acquisition in all two-catcher leagues and NL-only formats.

Juan Cruz, Kansas City Royals, RP: Soria’s shoulder injury has temporarily opened the door for someone to step up in the interim. When your choices are Kyle Farnsworth, Ron Mahay, or Cruz, I’d say the choice is a rather obvious one. Farnsworth currently has the Royals faithful clamouring for a return of Yasuhiko Yabuta. Although Trey Hillman has stated that the injury to Soria is not severe enough to land him on the DL, shoulder injuries do have a tendency to be lingering, making Cruz a solid addition in all formats.

Aaron Laffey, Cleveland Indians, SP: The 24-year-old southpaw is coming off solid back-to-back starts against the Royals and faces the Twins Sunday. This makes for an excellent opportunity for those playing in weekly transaction leagues as it gives you the chance to monitor his results before making any potential moves. That solid 2.19 ERA indicates Laffey should be rostered in AL-only leagues and on the radar in deeper mixed formats.

Melky Cabrera, New York Yankees, OF: In his past 19 at bats, Cabrera has smacked four long balls, bringing him halfway to his 2008 totals. With Brett Gardner struggling to stay above the Mendoza line, Xavier Nady on the DL, and the oft-injured Hideki Matsui still struggling with knee woes, Cabrera is a great add in AL-only leagues and should be watched very closely in all formats in the event that his playing time opportunities are expanded.

Kurt Suzuki, Oakland Athletics, C: The ongoing injury woes to catchers have moved Suzuki into being one of the hottest wire pickups in recent days. He is certainly not a stellar offensive threat, but has scored seven runs while posting an excellent .328 BA. He is probably one of the last solid options available in mixed leagues as a free agent, so grab him quick before he’s gone.