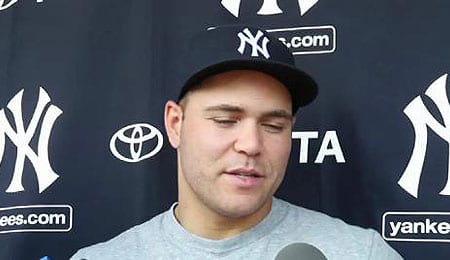 Russell Martin had a surprisingly productive season in New York.

Ho hum. The Yankees took the American League East for the 11th time in 14 seasons, but were unable to get back to the ALCS, suffering a five-game defeat to the Detroit Tigers in the ALDS. When they dropped that final game 3-2 at Yankee Stadium, it marked the first time the Yanks had suffered a one-run loss at home to knock them out of the playoffs since the 1926 World Series.

New York outscored Detroit 28-17 over the five games, yet wound up on the losing end. How does that happen? They haven’t won an all or nothing playoff game since 2003.

The Yanks got off to a nice start, spun their wheels a bit in May, but started rolling in June and never really stumbled. Despite dropping their last four games (to help dispatch the Red Sox, ironically), the Yanks finished with 97 wins, a two-game improvement over last year’s squad.

A high-powered offense definitely carried Manager Joe Girardi’s club, but overall, this was a really balanced Yankee team. The Pinstripers had power (first in the majors in homers), patience (first in walks) and speed (fourth in steals). The only offensive weakness was hitting into double plays (third most in the majors), but that’s simply a by-product of having runners on base more than most teams, to an extent.

On the pitching side, the Yanks weren’t horrible; middling to decent is a better description. The bullpen (fourth lowest ERA) definitely helped offset a rotation that’s collective ERA only ranked 14th. The staff struck out plenty of hitters, but overall only tied for 18th in WHIP.

New York was in the middle of the pack defensively.

Clearly, pitching – specifically the rotation – remains the focus of the organization this offseason. General Manager Brian Cashman is attending the organizational meetings this week, so it’s assumed his new contract is all but done.

The Yanks are expected to have to deal with C.C. Sabathia opting out of his contract, so much of their focus will be on how to bring him back.

Whatever money’s left over (um, right… there’s a budget?) will be used to beef up the rotation.

Individually, Alex Rodriguez continues to get more brittle and his decline has been steady since his monster 2007 season. His slugging percentage was its lowest this year since he was a rookie. A-Rod’s strikeout rate is headed in the other direction. He had another one of those playoffs (.118 in the ALDS), and you have to wonder how much he has left.

Mark Teixeira’s average continues to slide and he had his lowest run total since 2007, but he had another monster power year and, amazingly, his strike zone judgment is improving (even if it isn’t manifesting itself in a better BA).

Nick Swisher’s extra-base pop waned and his average dipped closer to career norms, but he remains a productive hitter who draws tons of walks. Unfortunately, he was pretty much a flop in the playoffs. Before finally coming through in Game Four, Swisher ran his streak of failing with runners in scoring position to 0-for-28, the longest in playoff history.

Derek Jeter struggled for most of the season and missed his most games since 2003, but he came back with a vengeance after returning from the DL to more than salvage his year. He still gets on base enough to be a viable leadoff man, and oh, there was that whole 3K thing he accomplished as well.

Robinson Cano had another huge season, despite a batting eye that regressed massively after last year’s spike. Productivity? How about a career-best 118 RBI plus another nine in the ALDS? Cano is up to eight postseason dingers, just two shy of the all-time record for a second baseman held by Chase Utley.

Jorge Posada had his adventures this year, and I’m surprised he wasn’t cut months ago after his ‘I don’t bat ninth’ tirade, but he’s clearly done as a Yankee. Hmm… little used DH that can’t hit? Even the Yankees wouldn’t pay for that, would they?

Meanwhile, his replacement Russell Martin enjoyed a fine debut in Pinstripes, having a productive season despite a declining batting eye. After last year, he looked done as a Fantasy asset, but he wound up being quite useful this year.

Brett Gardner set a new career high in steals, but was unable to build on his breakout 2010, especially as a table-setter. If he’s ultimately going to replace Jeter as the leadoff man, Gardner will need to duplicate the patience he showed in 2010.

Curtis Granderson was an absolute beast, putting together his best season and one that will likely bag him an MVP trophy. Power (41 homers? Really?!), speed and patience, and he even had his best BA since 2008. What an extra-base hitting machine Granderson was this season. Oh, and how about the leather he flashed in the playoffs?

Judging by his exploits in the one playoff game he appeared in, Jesus Montero looks like he’s ready to play a much bigger role next year. A multi-hit playoff game before the age of 22? Just three Yanks had done that: Mickey Mantle, Tony Kubek and Joe DiMaggio. Perhaps you’ve heard of them. Of course, Montero was no slouch in the regular season after his recall, batting .328 in 18 games. Bye bye Posada… hello Montero, the Yanks’ new DH/sometimes catcher.

On the mound, where would the Yanks have been without the phenomenal rookie showing from Ivan Nova, who won 16 games to lead all rookies, logged plenty of innings and turned in a fine ERA? The dude didn’t suffer a loss in the regular season after June 3. Smoking.

Sabathia had arguably his best season as a Yankee, especially if you take his results against Boston out of the equation. His hit rate rose, but he improved his control and struck out almost a batter per inning, while enjoying his best ERA as an AL pitcher.

A.J. Burnett is still capable of piling up innings. I suppose that’s something, isn’t it? But holy gopheritis, Batman! Oh, and that control thing? Twenty-five wild pitches? He probably wouldn’t have gotten a start in the ALDS had Game One not been split over two days, screwing up the rotations for both teams. Burnett still has two years left on his five-year, $82-million contract. How’s that deal working out for you, New York?

In the bullpen, Mariano Rivera was excellent again, en route to becoming the all-time saves leader. Rafael Soriano had injury problems, and wasn’t nearly as good as 2010; in fact, he had his highest WHIP ever.