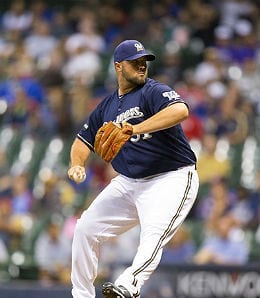 Jonathan Broxton should get the first crack at saves in Brew City. (Reviewingthebrew.com)

It’s early February, and pitchers and catchers don’t report for a couple of weeks, but it’s never too early to be making plans for the upcoming season of Fantasy baseball. Each and every year we spend countless hours searching for the next “great” thing, that diamond in the rough that will lead us to the promised land. In the words of the immortal Maria Von Trapp, “These are a few of my favourite things.”

Jonathan Broxton, RP, Milwaukee Brewers: Yes, Francisco Rodriguez has done an amazing job over the past several seasons for the Brew Crew, but it is highly unlikely he will return in 2015. When Milwaukee is paying $9 million for the services of Broxton, we think it’s fairly safe to say he has to be the early favourite to assume the closer role this year. Pencil the former Royal (see video below) in as such, buy him late, and reap the rewards.

Francisco Cervelli, C, Pittsburgh Pirates: We know, Cervelli has only broken the 200 at-bat plateau once in his career, but is it his fault he never got the opportunity? His stumbling block to playing time in Pittsburgh, Russell Martin, has moved on to his native land so the opportunity for Cervelli is at hand. Cervelli could put up seven to 10 homers, 50 RBI, and a .260 BA, and that works just fine as a second catcher in two-catcher formats.

Maikel Franco, 3B, Philadelphia Phillies: Well, Cody Asche wasn’t the answer, and could be heading to the outfield which would open up a roster slot for top prospect Franco. The Phillies and GM Ruben Amaro Jr. have finally come to grips that “winning” might not be in the cards in 2015 and that being the case, it should be time to give younger players an opportunity. In his first go-round at Triple-A Lehigh Valley, Franco mashed 16 homers and 33 doubles. That’s pretty solid production from a 22-year-old and bodes well for his transition to the big league roster.

Kendall Graveman, SP, Oakland Athletics: Will we ever figure out what Billy Beane is trying to accomplish in Oakland? We know we’re struggling to sort that out, but we’re not struggling to understand why Graveman was sought after and included in the package of players going to Oakland in the Josh Donaldson blockbuster trade. Graveman went from Low-A to the big league roster in one year and his minor league numbers didn’t skip a beat as he moved to the higher levels. In 167 1/3 IP he allowed 142 hits and 31 walks while striking out 115 in posting an outstanding 1.83 ERA. He will definitely be a part of the A’s pitching plan this season.

Juan Lagares, OF, New York Mets: Yes, Lagares is boring and offers marginal power potential, but his glove will keep him in the lineup and he managed seven thefts in his final 15 games of the 2014 campaign. A sprinkling of homers and decent stolen base numbers is something always worth exploring in the latter rounds.

Daniel Norris, SP, Toronto Blue Jays: Norris is currently chomping at the bit to find his way onto the big league roster and the odds are very high that we see him sooner rather than later. How much sooner? That will depend on the health and effectiveness of the current five starters slotted into the Jays’ rotation. Norris, a 22-year-old southpaw, held the opposition to a .212 BA and struck out 163 batters in 124 2/3 IP as he tore through the minors last year. What’s not to like?

Dalton Pompey, OF, Toronto Blue Jays: One of the bigger questions we face heading into draft season will be how high and quickly does Pompey move up the draft board. The Jays have handed him the starting centre field gig heading into 2015 and he should take it and run with it. The local lad managed to slug nine homers with 51 RBI while swiping 43 bags on his march through the minors in 2014. Temper your expectations from a power perspective, but the speed should be there right out of the gate, making Pompey an intriguing option in the middle-to-late rounds in 2015 drafts.

Kevin Quackenbush, RP, San Diego Padres: San Diego’s incumbent closer, Joaquin Benoit, will turn 38 in July and is also missed a month down the stretch with shoulder woes last year. Quackenbush very capably stepped up and chipped in with five saves and 13 strikeouts in 11 IP in Benoit’s absence. Don’t forget about “Duck Boy” when building your bullpen.

Ryan Rua, OF, Texas Rangers: Unless the Rangers do some late shopping, it looks like all that stands between Rua and a full-time gig in left field is Jake Smolinski. In 471 at-bats split between Double and Triple-A, Rua slugged 18 homers and drove in 74 runs. He also found the time to take home the title at the Texas League Home Run Derby. We advise you to make this young outfielder part of your plans for 2015.

Steven Souza, OF, Tampa Bay Rays: The Rays didn’t trade for this kid to have him sitting on the bench. In 2014, Souza slugged 18 homers and swiped 26 bags in 346 at-bats at Triple-A Syracuse. Now that he’s finally freed of the logjam he faced in Washington, his five category skills are very enticing.

Devon Travis, 2B, Toronto Blue Jays: Ryan Goins is no one’s idea of a legitimate answer at the keystone corner in Toronto. That’s why a late-round/bench slot should have Travis’ name written all over it. He offers a little power, a little speed, and a ton of opportunity, and that should be cause for an early arrival for this offseason acquisition from the Tigers.

Nick Tropeano, SP, Los Angeles Angels: Here are two huge reasons to give Tropeano a good look when filling out your reserve slots in early 2015 drafts. One would be C.J. Wilson. The other would be Hector Santiago. The latter finds too much of home plate while the former struggles to find it at all. Tropeano tamed the PCL last season in posting a league-best 3.03 ERA. Is the AL West next on his agenda?

Now it’s your turn. Let us know in the comments below which players you’re targeting this season as deep sleepers.

Mercer is slapping the ball all over the place and is scorching hot with a .415 BA in July, following up a five-homer June. What’s not to like? If you’re looking for a middle-infield replacement for Phillips, look no further.

Duvall has smashed 23 homers in 263 at-bats at Triple-A Fresno this year.

The defending World Series champs are in trouble and need a boost from their outfield production. Could Betts provide that spark? They’ve moved him from the middle infield to the outfield and with his recent promotion to Triple-A he hasn’t skipped a beat. In the past 10 games at Pawtucket, Betts is getting on-base at a .422 clip (see video below) with five stolen bases. Buying in now could save you a pile of FAAB cash as his eventual promotion could be right around the corner.

The big concern is whether he can he keep the free passes to a minimum. At Triple-A Colorado Springs, Matzek walked 31 batters in 66 2/3 IP (which is actually a massive improvement for him already). If he can keep the walks down he has the potential to be a solid asset for both the Rockies and your Fantasy squad.