Dear RotoRob: Are You Ready for Some Football? 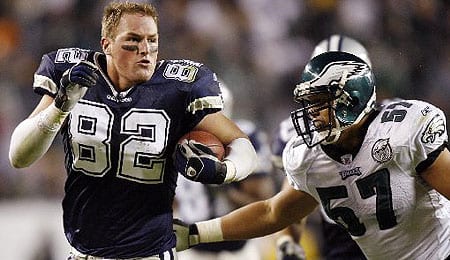 We’d be more worried about Jason Witten playing without a helmet than owning more than one Cowboy.

With NFL getting underway for real Thursday, we thought we’d dip into the mailbag and cover a few Fantasy football questions for you today.

Welcome to the new year of Fantasy football. I used the draft best available strategy. I somehow ended up with Miles Austin and Jason Witten. My question for you is should I leave the team alone or try to trade one of the Dallas players away? I’m thinking of packaging Brandon Jacobs and Witten for Vernon Davis and Cedric Benson. What do you think?

I don’t get too worried about having two players from the same team — especially when that team figures to put up plenty of points during the season. That being said, I can see some potential gain from the proposed trade; Jacobs is in a time share in NY, and Witten’s TD production is almost certain to drop with a healthy Dez Bryant in town. If this is not a PPR league, I’d say make that deal if the other guy’s game. Hope this helped and good luck this season.

You helped me a ton in 2010… I got second place in large part to your advice.

I drafted Aaron Rogers with pick No. 6 and then Larry Fitzgerald for Round Two.

Running backs are thin for me in my 14-team league: Tim Hightower, Ahmad Bradshaw, Kendall Hunter and Delone Carter are the four I got.

My question is do you see either of these rookies getting touches (other than if there’s an injury to the No. 1 RB on their team)?

I think Carter has a real chance to make some noise in the Colts’ offense — especially with Peyton Manning on the shelf. Indy figures to be a more run-oriented team now, and Joseph Addai has not shown that he’s capable of shouldering a heavy load. Carter, though, carried 467 times and scored 21 total touchdowns between his junior and senior year at Syracuse. I can see him getting a shot at the goal line at some point, and also seeing 15 or so touches per game — though very few as a pass receiver. Hunter looks like the No. 2 in San Francisco, but I think it would take an injury to Frank Gore before he’d become Fantasy-relevant. Thanks and good luck this year!

Not much Fantasy football buzz headed in my direction on Twitter lately, but this one came in recently:

Marshall is the safer option here; Bryant should have a fine year, but with so many options in Dallas, it’s hard to imagine him putting up huge numbers.

Dear RotoRob: How Can I Improve My Team?

Again, this is an extremely open-ended question. I’m happy to assess specific deals you have in mind, but it’s difficult to just look at your team and make sweeping suggestions.

By RotoRob
Posted in BASKETBALL, Dear RotoRob, RotoRob | No Comments »

No way I play Westbrook. None. Same with Thomas. Five games with less than 50 yards receiving in his last six.

By making this deal, you’re going to garner a slight boost in scoring, a nice gain in 3-pointers, a slight lift in rebounding and a decent bonus in steals, while FG percentage is virtually a wash. The blocks category is basically even here as well.

By RotoRob
Posted in BASKETBALL, Dear RotoRob, RotoRob | No Comments »