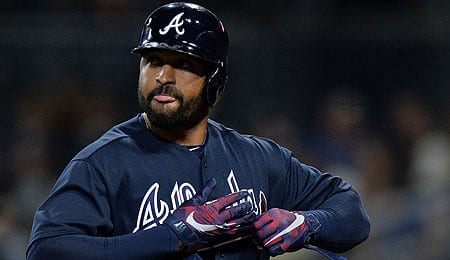 Well, Fantasy baseball fans, we are now well and truly in the middle of crazy season. Trade rumours are flying around left, right and centre and Fantasy owners will be keeping a close eye on the future of various big name stars like Billy Hamilton, J.T. Realmuto and Gerrit Cole. With a few blockbuster trades expected in the coming months, the Major League Baseball landscape may be about to change dramatically.

Can anyone topple the Houston Astros after their incredible 2017 season? The Los Angeles Dodgers will be desperate to get revenge after falling short on the big stage, so 2018 could be one of the most exciting MLB seasons in recent memory. Here are a few key trades that have already gone down – and a look at how they will affect the 2018 Fantasy baseball campaign…

The Los Angeles Dodgers sent shockwaves across the majors when they traded four players away to bring two-time All-Star outfielder Matt Kemp back to his original home. One of the biggest reasons for L.A.’s trade was to clear up plenty of cap space ahead of what could be an intense free agency market after the 2018 season.

With the likes of Josh Donaldson, Bryce Harper and Manny Machado all expected to hit the market a year from now, it wasn’t a huge surprise to see the Dodgers clear a few salaries to make way for a hefty year of spending. Kemp is one to watch in 2018, as he could be a major player in Fantasy – especially as he is likely to go in the later rounds after a down season.

After spending half of 2016 on the sidelines with a PED suspension, two time All-Star Gordon showed his quality in 2017. He recorded 201 hits this year – an impressive number and one that rivals his greatest MLB season. In addition, he finished the campaign with a .308 batting average and 60 steals, the second highest figures of his career.

.@FlashGJr is heading west to play CF for @Mariners, per @MLBNetwork Insider @Ken_Rosenthal. Clubs have not confirmed: https://t.co/vUEjFJ4kaJ #HotStove pic.twitter.com/NCEoAKqK3e

The Seattle Mariners are going to improve with Gordon (expected to shift to centre field) on the roster and fans are excited about what the future holds. As of December 18, the online betting odds show the Mariners at 40-to-1 to go on and win the 2018 World Series. Fantasy owners will hope that Gordon can build on what he did this year and inspire Seattle to go the distance next year.

Another high profile name that has left Miami for greener pastures is Giancarlo Stanton, who has been destined for a move to the New York Yankees for some time. A four-time All-Star, including this year when he also was named National League MVP after smacking 59 homers (see video below), he deserves an opportunity to win the World Series and he should get that with the Yankees.

Stanton’s stats for 2017 were seriously impressive and he can take New York to the next level if he is able to emulate last season’s form. At age 28, he is in superb physical shape and is in the prime of his career. Stanton will be a very high pick in Fantasy formats this year but he is well worth it. He should be an instant success in his new surroundings.

Now it’s your turn. Let us know in the comments below what you think the biggest move has been so far this offseason.

Wisler just keeps on keeping on for Atlanta, with last Sunday’s start in St. Louis showing what the future might hold for the young right-hander. Once he cuts down on his walks he will be a very effective starter.

Schwarber may be headed back to the minors, but he’ll be back supplying his trademark power before you know it, so if you have room, keep him stashed.

While it’s true that he is human and will occasionally turn a situation sticky, he remains perfect in save chances early on this year. Okay, so if you want to call his ERA rising two-tenths of a run last year alarming, go ahead. You’re probably also a germaphobe. There aren’t many hurlers that can blow hitters away with such ease as Kimbrel can. Let’s see… 900 hitters have now faced him since he arrived in the majors and he’s struck out 392 of them (44 per cent). What do you think? Kimbrel has been the clear No. 1 on this list for a couple of years now and considering how tough it is to take him yard, we don’t see him going anywhere as long as he’s healthy.