The Wire Troll: Dodgers Have Another Intriguing Arm in Tony Gonsolin 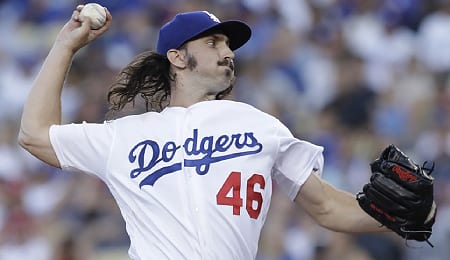 Welcome back to another week of Fantasy baseball. This is our penultimate column for August, meaning the season is nearly done. Still in it? Use the wire!

This week, Francisco Cervelli asked for and received his release from the Pirates (and then wound up in Atlanta); Brock Holt‘s RBI single gave Boston a win — two weeks after the game started; and Brandon Lowe is done for the season thanks to a quad strain.

And now, let’s get to this week’s Fantasy baseball waiver wire recommendations, decidedly heavy on the pitching side…

Tony Gonsolin, SP, Los Angeles Dodgers (ESPN: 23.6 per cent; CBS: 13 per cent): Gonsolin hadn’t really popped up on the Fantasy radar yet despite being named the 2018 Dodgers Minor League Pitcher of the Year. But he’s put up some very impressive outings since being recalled at the end of last month, and it looks like the Dodgers have yet another interesting young arm on their hands here. Gonsolin has shown tremendous command while averaging nearly a K per frame and holding hitters to a .225 mark against in his first taste of the bigs. Not bad after he put up an unimpressive record and ERA at Triple-A. We especially like the fact that Gonsolin has looked effective both in a starting role and throwing multiple innings out of the pen (see video below).

Justus Sheffield, SP, Seattle Mariners (ESPN: 3.3 per cent; CBS: 30 per cent): One of the key pieces Seattle received in the James Paxton trade, Sheffield came in at No. 90 in our Top Prospects list heading into the season. The lefty made one wild appearance earlier this season, and on Friday he was recalled to make his first MLB start and while things didn’t go brilliantly, at least he kept the ball in the yard. Sheffield was gaining some valuable experience at Triple-A, but was getting rocked, so was demoted to Double-A in mid-June. He was racking up the wins there, so Seattle opted to give him another look in the bigs. Consider Sheffield in AL-only leagues.

Hunter Strickland, RP, Washington Nationals (ESPN: 7.4 per cent; CBS: 19 per cent): The Mariners have completely dismantled their bullpen since the start of the season and one of the key moves was trading Strickland to the Nats. Since landing in Washington, he’s been lights out, with eight scoreless outings among his nine appearances. In fact, pretty much the only thing to have gone wrong so far is a weight room snafu that ended with Strickland busting his noggin. He had shown good control in his brief time with the Mariners, and has been virtually unhittable since joining the Nats. Seeking holds? Strickland can help.

Brock Burke, SP, Texas Rangers (ESPN: 8.9 per cent; CBS: 7 per cent): Tampa Bay’s third rounder in 2014, Burke was traded to Texas as part of that massive three-team deal involving Jurickson Profar in late-December. Burke was hurt a good part of this season, and when healthy, he hasn’t been as good as he was in 2018, yet he did earn his first taste of Triple-A. And earlier this week, he was recalled to Texas and hurled six shutout innings at the Angels in his MLB debut. That has our attention for the time being, so take a flier on Burke in AL-only leagues.

Jo Adell, OF, Los Angeles Angels (ESPN: 2.3 per cent; CBS: 30 per cent): According to reports, Adell is unlikely to receive a September call up, but man, do you want this kid on your team in a keeper format. Few players in the minors have this kind of upside, and if not for a Spring Training injury that cost him the first few weeks of the season, he might be in the Show already. Adell racked up a ton of extra-base hits at Double-A, earning a promotion to Triple-A at the beginning of the month. He isn’t putting up total bases at the same level now, but make no mistake — this is a future Fantasy stud.

Evan Marshall, RP, Chicago White Sox (ESPN: 0.1 per cent; CBS: unowned): “Forgetting Sarah” Marshall (his rather clever players’ weekend nickname) could be a speculative add if you believe closer Alex Colome may still be dealt at the August trading deadline. Marshall has stuck around the bigs long enough this year to pitch his most games since his stellar rookie in 2014. He’s kind of sucked since then, but has finally found himself again, and could gain even more responsibility down the stretch if Colome is sent to a contender. Because Marshall pitches so few innings, he needs holds to offer value.

American alt country/country rock band The Jayhawks got their start in 1985, and despite a couple of breaks along the way, are still going strong. In 1995, the band released its fourth album, Tomorrow the Green Grass, perhaps their peak period. From this effort comes “I’d Run Away.”

By RotoRob
Tags: Los Angeles Dodgers
Posted in BASEBALL, RotoRob, The Wire Troll | Comments Off on The Wire Troll: Dodgers Have Another Intriguing Arm in Tony Gonsolin

The 2016 edition is now out, and we’re here to give you the inside information about what you can expect. And hell, we’ll even throw in a sweet offer for our readers because we are just all about spreading the STD-free love.