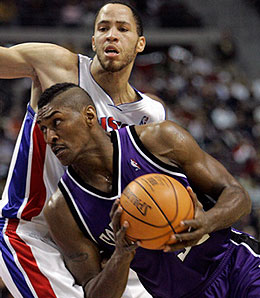 Ron Artest, right, probably won’t be driving past any opponents in the near future after yesterday’s arrest on a domestic abuse charge.

You know, when you dissed Mike Bibby because of his D, we weren’t really bothered by it; when you demanded a trade, we didn’t mind, because at least you kept playing. Damn, even when you mistreated your dogs, it didn’t hurt us (although it proved you were an asshole). But now, Ron Artest, you have crossed the line. Thanks to your arrest for domestic abuse (the alleged actions of which speak for themselves about your character), an episode which I expect will prohibit your return to action this season, you have put the final nail in the coffin of my fantasy team. We check in on the latest Artest exploit in today’s Daily Dose.

Devean George is almost ready to return; Jason Hart has landed with the PG-desperate Clippers; David Lee is expected back tonight; Luke Ridnour has a serious pain in the neck; and Crash is stepping up as the main man in the Bobcat frontcourt.

While I try to figure out how I’m getting so much traffic from myspace even though I don’t even have an account there, you can read all the fantasy basketball news that’s fit to print in today’s Daily Dose.

By RotoRob
Tags: Mike Bibby, Ron Artest
This entry was posted on Tuesday, March 6th, 2007 at 4:02 pm and is filed under BASKETBALL, NBA Daily Dose, RotoRob. You can follow any responses to this entry through the RSS 2.0 feed. Both comments and pings are currently closed.