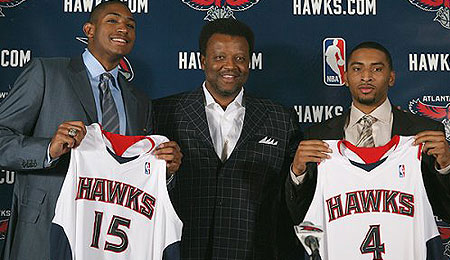 In looking back at their demeanour on draft night, was it any surprise that Acie Law, right, was a flop, and Al Horford, left, a huge success?

In our final Daily Dose of the NBA season, we examine the fantasy studs and duds on each team.

Baron Davis stayed healthy and was an absolute beast for you; Corey Brewer wasn’t able to gain much traction during his rookie season; Manu Ginobili has to the Sixth Man of the Year after his stellar season; and Kirk Hinrich was a massive source of frustration for his fantasy owners this season.

Confused about how RotoRob didn’t make

NBA Daily Dose: Getting Even

Pau Gasol (the tall one with the beard) finally ditched his street clothes and returned to the Lakers Wednesday. Oh man, talk about the Return of the Living Dead! A mind-blowing number of NBA stars rose from the dead last night, returning to action after, in some cases, very extended absences. In today’s Daily Dose […]

Mike Dunleavy is enjoying a serious breakout season for a crappy Pacer team. (Ron Hoskins/NBAE/Getty Images) When the MVP candidates are being discussed, few are talking about Kevin Garnett, especially since he’s having his worst season in over ten years. But who has played a bigger role in his team’s success than KG? In today’s […]

While most experts hype the chances of Boston and Detroit in the East, let us not forget about Cleveland, the defending conference champs. That’s the message the Cavs delivered Wednesday night, taking out Detroit. We explore the situation in today’s Daily Dose. Andrew Bynum is not being shut down after all; Vince Carter drove the […]