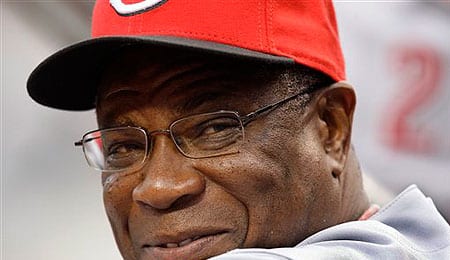 Dusty Baker was unable to guide the Reds back to the playoffs this season.

We’re just days away from finding out who will play in the 2011 World Series, but for most teams, their fates have been sealed for weeks.

Take the Cincinnati Reds, for instance. Last year’s surprise team when they won 91 games to take home the NL Central, flopped back into suckitude this year, dropping to 79 wins and slipping back to third in the division.

There are many that believed the Reds would again be the team to beat in the Central this year, but I was never fooled and I said so in our in NL Central Preview Podcast prior to the season. My rationale was that they simply hadn’t made enough improvements in the offseason.

After flopping in Chicago with the Cubs, Manager Dusty Baker has now guided the Reds to exactly one winning season in his four campaigns in Cincinnati. And despite last season’s playoff appearance, the Reds still haven’t won a postseason game since 1995.

So what happened to cause the Reds to drop back to the pack this season?

They certainly got the job done against their division rivals, going 42-37, but got smoked in inter-league action, winning just six of 18 games against AL opponents. State rival Cleveland in particular gave the Reds fits, as the Tribe took five of six from Cincy.

The Reds’ offense was solid, but struck out too often and relied much more on power than speed. In fact, they were one of the worst base stealing teams in the majors, at least from a success rate standpoint. The bench did a solid job, ranking third in the majors in pinch hitting.

Joey Votto stayed healthy enough to set career highs in hits, doubles and walks, but he was unable to duplicate his monster 2010 MVP season. Jay Bruce also stayed healthy and while he had a career high in runs, hits, doubles, homers, RBI and walks, he dropped 25 points in BA from 2010. Despite more strikeouts than normal, Brandon Phillips enjoyed his first .300 season. However, from a Fantasy standpoint, his power and speed keep waning. Still, he enjoyed a fine season.

Drew Stubbs’ power dipped and his strikeout total was abhorrent, but he did swipe a career-best 40 bases. Overall, though, his numbers paled compared to 2010. The modest gains in Paul Janish’s offensive game we saw in 2010 disappeared and he looked completely inept at the plate. Prospect Zack Cozart looked ready to steal the shortstop job, but he suffered season-ending injuries and required elbow and ankle surgery. Assuming he’s healthy next spring, it’s his job to lose.

The pitching, on the other hand, let the team down – especially the rotation. Just four complete games all season long? And only the Indians’ staff had fewer shutouts than the Reds this season. The rotation did manage a decent 90 quality starts, which suggests that when they were bad, they were awful. After all, the staff was quite good at limiting walks, but didn’t exactly rack up the strikeouts. The upshot was an overall staff command that was not good.

Mike Leake was the only starter on the team to reach double digits in wins and while he really improved his hit rates (we won’t discuss his steal rates), he’s no one’s idea of an ace. Johnny Cueto had a wonderful season – when he wasn’t on the DL. But he’s never been a dominant hurler and his K/9 has been in freefall since he came into the league. Bronson Arroyo? Well, at least he improved his control, but how’s that whiplash, dude? Forty-six homers allowed? Really?!? Homer Bailey enjoyed his best season, but wasn’t he supposed to be a stud? Um, I think not. And Edinson Volzquez? Let’s see… no control, awful command and he can’t stay healthy. Am I missing anything?

Overall, an OPS against of 740 put Cincy’s pitching staff in the lower tier of the majors. The fact that it gave up more homers than every team besides the Orioles and Astros didn’t help matters. And even while the bullpen’s ERA was solid, it was among the worst in the game in terms of converting saves.

So if I were running the Reds this offseason, it’s clear where I’d concentrate my efforts. My priority would be in upgrading the rotation – the team lacks a true dominant ace. I’d also aim to slightly upgrade the bullpen – and that doesn’t mean picking up the option on Francisco Cordero. Let him walk, and use a portion of that money to fill in the gaps with a couple of solid middle relievers. I might also try to add a bit of speed to the team, but that would be more of a nice to have as opposed to a necessity.

By RotoRob
Tags: Cincinnati Reds
This entry was posted on Saturday, October 15th, 2011 at 12:52 pm and is filed under BASEBALL, RotoRob, Team report. You can follow any responses to this entry through the RSS 2.0 feed. Both comments and pings are currently closed.