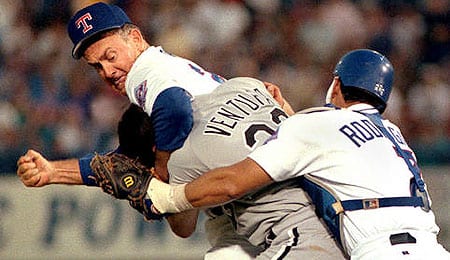 As the new head honcho for the Pale Hose, Robin Ventura has a tough fight ahead of him to return the team to contention.

There were many experts that anticipated that the Chicago White Sox would battle for the AL Central crown this season, a year after finishing second and winning 88 games. So what happened?

The Pale Hose actually got off to a nice start, going 6-3 over the first nine games, but then the wheels came off. Chicago went into a 5-19 slump that dropped it to a season worst 11 games under .500 (11-22) on May 6. The Sox spent the rest of the season trying to bounce back, but only once (August 30), did they manage to again get to as high as three games over .500. They wound up with just 79 wins, 16 games off the pace and in third place in the AL Central.

It was a tumultuous end to Manager Ozzie Guillen’s tumultuous career in Chicago, and he wound up resigning with days remaining in the season and landed on his feet as the new man in Florida – a move that had long been speculated.

Robin Ventura takes over as the new manager for the Pale Hose, and while he’s a former Sox star, he has no managerial experience. He inherits a squad that’s offense was middling at best and sub standard at worst. The team didn’t strike out much, but also didn’t walk enough. Hey, at least they hit to contact. The Sox could definitely use an upgrade in speed, and a general tutorial on base stealing – only the Cardinals fared worse on the basepaths (of course, that didn’t stop St. Louis from becoming the NL Champs). At least the bench did a solid job in terms of pinch hitting.

Still, the Sox’ overall offensive performance was poor enough to prompt hitting coach Greg Walker to step down at the end of the season.

The pitching, while not horrible, was not good. After ranking 22nd in ERA among all bullpens, the Sox could use an upgrade among their relief corps, especially if Chris Sale moves into the rotation as expected. The rotation was pretty inconsistent. Overall, the numbers weren’t good, but Chicago’s starters still managed 90 quality starts and 14 shutouts. As a staff, the control was very sharp, and the strikeout numbers were strong. Unfortunately, Sox pitchers were too easy to hit and allowed way too many steals. It might help if the team’s catchers were capable of shutting down opponents’ running games, but the Sox were among the worst in the majors in that category.

There can’t be many complaints about the gloves, as just two teams (the Rays and the Phillies) committed fewer errors than the Sox.

The bottom line here was the Sox’ 79-win effort was huge disappointment and the season seemed to spin out of control as it progressed, which is never a good sign. This team had much higher expectations, so the fact that Guillen is gone and they’ll get a fresh start next year is definitely a very good thing.

Unfortunately for the White Sox, there’s not a lot of help on the way – internally, at least. This team is saddled with the worst minor league system in all of baseball, and is in dire need of a major injection of young talent.

Of course, the team has received instant dividends from last year’s top draft pick, Sale, who enjoyed another fine season in the bullpen but, as mentioned above, is likely to move into the rotation next season.

Mercifully, Juan Pierre’s contract comes off the books after this season. How he continues to hit atop a major league lineup everyday is one of life’s great mysteries. Pierre has never been an on-base machine, but last year was putrid. And the truly sad part is that he’s not even a good basestealer anymore. The dude was just 27-for-44 this year – his worst success rate since he was a rookie for the Rockies way back in 2000. Anything under two-thirds success on the basepaths is actually hurting the team, and Pierre only stole successfully 61 per cent of the time. Good riddance to this free agent to be!

Assuming Pierre is gone, the leadoff job may fall to Alejandro De Aza, making him a nice sleeper choice for 2012. De Aza was a dynamo down the stretch, showing nice development at the plate and improved basestealing skills. He also proved he knows how to get on base.

I shudder to think how bad the Sox would have been this year without the shockingly pleasant performance of Philip Humber, who just missed out on winning double digits and enjoyed a breakthrough performance with a 3.75 ERA, second lowest on the staff. He should definitely hold down a spot in the Sox rotation again next season.

The only starter with a better ERA was Mark Buehrle, who continues to be one of the most dependable workhorses in the game, having pitched at least 200 innings in every season since the Sox made him a full-time starter in 2001. His always fine control was a tad sharper this year, helping his WHIP bounce back after a somewhat down season in 2010. Buehrle is another pending free agent for the Sox, and while he’s said he’d like to return to the only team he’s ever pitched for, it won’t be easy for them to retain him as he’ll command some serious coinage.

At shortstop, Alexei Ramirez continues to underwhelm. He finished second in the AL ROY race in 2008, and has never come close to duplicating that effort. Ramirez did stay healthy enough to match his career high in hits, but it’s becoming painfully obvious that we’ve seen the best he has, and – while it’s decent – it’s nothing to get excited about.

Ramirez’s double-play partner, Gordon Beckham, remains an enigma wrapped in a riddle. After such a splendid rookie effort in 2009, he’s been in free fall since. Beckham stayed healthy enough to play in a career high 150 games and set new highs in some counting categories, but his patience is regressing and his BA is awful. Beckham, combined with Adam Dunn and Alex Rios, were the biggest disappointments for this team on offense.

Dunn, of course, took the cake in this department. He fell just six plate appearances shy of setting a record for the worst qualifying batting average in modern big league history. The Sox doled out $56 million over four years for a slugger. Instead he hit .159, struck out a franchise record 177 times and managed just 11 dingers and 42 RBI. Really?! Even if he simply sucks next year, Dunn will be vastly better than he was in the first year of his mega-contract. This is way too good a hitter to not figure it out.

For a team that only ranked 19th in OPS, just imagine how much worse things would have been had it not been for another superb season from Paul Konerko, who continues to defy the odds and put up big numbers in his mid-30s.

By RotoRob
Tags: Chicago White Sox
This entry was posted on Thursday, October 20th, 2011 at 3:49 pm and is filed under BASEBALL, RotoRob, Team report. You can follow any responses to this entry through the RSS 2.0 feed. Both comments and pings are currently closed.