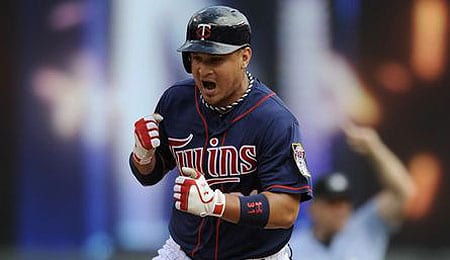 Oswaldo Arcia is a future All-Star for the Twinkies. (El-nacional.com)

As Week Four wraps up, it’s becoming more clear that what we perceived as an aberration with closers last year is actually a trend. Of the 30 projected closers heading into Spring Training, 10 have lost their jobs. With a one-third turnover in jobs, Fantasy owners are pulling out their hair in the early going. It’s not surprising that relief pitchers once again dominate this week’s Troll.

Without further ado, here are this week’s picks.

Carlos Ruiz, C, Philadelphia Phillies (CBS: 37 per cent owned, ESPN: 11 per cent): Ruiz, a top 20 catcher in the preseason, is on a roll and has been shockingly overlooked. Over the last seven games, he’s 11-for-25 with one homer, seven RBI and eight run. It took him a while to break his 2014 RBI cherry (see video below), but now that he has they are flowing like wine. If the Phillies are to be the playoff contender that GM Ruben Amaro envisions, Ruiz will have to stay healthy and productive.

Oswaldo Arcia, OF, Minnesota Twins (CBS: 25 per cent owned, ESPN: 1 per cent): Arcia got off to a slow start and lingering wrist issues sent him to the DL after just 18 at-bats. The 22-year-old is now rehabbing at Triple-A Rochester with a return just around the corner. Give him a week to knock the rust off and hopefully he’ll return to his rookie form of last year (14 homers in 351 at-bats).

Joe Smith, RP, Los Angeles Angels (CBS: 39 per cent owned, ESPN: 26 per cent): Gopheritis was the demise of Ernesto Frieri and until he can rein it in the Angels have turned to Smith to try to find some late inning magic. After three solid years in the Cleveland bullpen, Smith should be able to transition into the closer role. If he can prove his mettle he could take over the job for the long haul.

Kyle Farnsworth, RP, New York Mets (CBS: 45 per cent owned, ESPN: 48 per cent): Jose Valverde just couldn’t get it done, so the Mets have turned to another aging veteran in Farnsworth. Farnsworth managed back-to-back saves in his first two efforts, but gave up the game winner Saturday against the Fish. He’s got the job, but the leash is very short.

Mark Melancon, RP, Pittsburgh Pirates (CBS: 39 per cent owned, ESPN: 32 per cent): Jason Grilli has landed on the DL with a left oblique strain, which could explain his struggles last weekend when he blew back–to-back saves. Melancon has stepped into the ninth inning role again and given his 16 saves last season while filling in when Grilli was hurt, he will have no problems handling the job again.

Marcus Stroman, SP, Toronto Blue Jays (CBS: 16 per cent owned, ESPN: unowned): Dustin McGowan’s return to the rotation has been a great story, but he simply hasn’t been able to get the job done. Stroman has been superb down on the farm posting 26 strikeouts in 20 2/3 IP to go along with a stellar 2.16 ERA. The clock is ticking and a promotion to the Jay rotation could be right around the corner.

Tom Koehler, SP, Miami Marlins (CBS: 37 per cent owned, ESPN: 3 per cent): In the early going Koehler has faced off against the Nats (twice), the Braves and the Padres and all four outings have been quality starts. He won’t be flying under the radar much longer.

Daisuke Matsuzaka, SP/RP, New York Mets (CBS: 10 per cent owned, ESPN: 2 per cent): We’re betting that the save Dice-K earned last week isn’t going to be his last. Farnsworth owners should look to him as a handcuff.

Collin McHugh, SP, Houston Astros (CBS: 11 per cent owned, ESPN: 3 per cent): In four games at Triple-A, McHugh had eight strikeouts in 14 IP. In his Astros debut last week against the Mariners, he struck out 12 in 6 2/3 shutout innings. Proceeding with caution is the prudent approach here.

Cody Ross, OF, Arizona Diamondbacks (3 percent owned, ESPN: unowned): Two weeks ago we mentioned that Ross would be returning. Well he’s back and Mark Trumbo has hit the DL with a stress fracture in his left foot. The struggling D-Backs will need Ross to pick up the pace if they have any hope of turning around a nightmarish start.

Robbie Ray, SP, Detroit Tigers (CBS: 2 per cent owned, ESPN: unowned): The Tigers will need a fifth starter to replace Anibal Sanchez, on the DL with blister issues. Ray is off to a great start for the Triple-A Mud Hens, so seems the most likely to get the call.

Jace Peterson, 3B, San Diego Padres (CBS: 2 per cent owned, ESPN: unowned): Chase Headley (right calf strain) is out, so for at least three weeks Peterson will share time with Alexi Amarista at the hot corner. Peterson has some serious wheels (42 steals in 2013) and could provide a nice short-term boost in thefts for NL-only league owners.

Bobby Abreu, OF, New York Mets (CBS/ESPN: unowned): The Mets gave Abreu a shot. NL-only owners should do the same.

Now it’s your turn. Let us know in the comments below who your favourite baseball waiver wire pick of the week is.