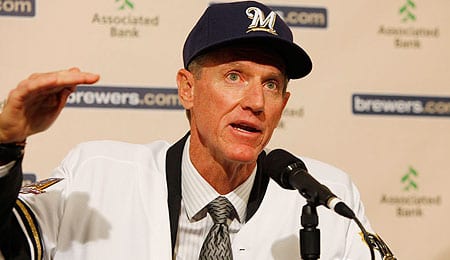 Ron Roenicke pulled the right strings in his first season as an MLB manager.

The Milwaukee Brewers got off to a sluggish start, dropping their first four games and struggling through a bad stretch at the end of April and beginning of May that had them six games under .500 as of May 6.

Man, did things ever turn around from there, as the Brew Crew went 83-47 the rest of the way to easily coast home with the NL Central crown and a franchise-record 96 wins. Ron Roenicke couldn’t have asked for a better result in his first season as a big-league manager. Milwaukee finished with the best home record in baseball, and it showed in the NLDS as it took all three games in Sausage City against Arizona, while dropping both contests on the road.

The Brewers also struck first at home in the NLCS against the Cards, but St. Louis won four of the next five (including two of out three at Miller Park) to extend Milwaukee’s drought without a trip to the World Series to 29 years. To underscore their home-road issues, the Brewers win in St. Louis in Game Four snapped a streak of eight straight road losses in the playoffs, making them just the fifth team in history with a streak that long.

The Brewers home-road splits were drastic this year as they recorded an OPS of 805 at home and just 698 on the road, but they were really apparent in the playoffs (836 OPS at Miller Park; just 648 away from home).

An offense-first club for several years, it was the pitching – especially from the bullpen — that really drove Milwaukee this season. Oh sure, the Brewers were still one of the better offensive clubs in the majors, especially in the power department (leading the NL in homers), with overall team speed being the only real weakness.

But for the first time in a dog’s age, they had the arms to match the bats and, remarkably, the staff not only ranked among the MLB leaders in strikeouts, but also rated very well in terms of fewest walks allowed. The team also did a fine job of limiting the number of steals it allowed. Unfortunately, the pitching sure collapsed in the NLCS, as the Brewers were twice shelled for a dozen runs in front of their home fans.

Defense was definitely Milwaukee’s Achilles’ Heel, as only a handful of teams committed more errors. The baseball world was treated to a first-hand exhibit of this during the playoffs as the Brewers made a whopping 12 miscues in 11 games – seven of which came in the final two games of the NLCS. Second baseman Rickie Weeks continues to prove he’s a liability defensively, as he committed 15 errors in just 115 games in the regular season and another four in the playoffs.

he big question this offseason is whether pending free agent Prince Fielder will return. The 2011 All-Star Game MVP well-timed a monster year, scoring 95 runs for the third time, while driving in 120 for the second time and setting a new career high in OBP. The team’s first round pick in 2002 is not expected to return to Milwaukee as many believe he’ll head to division rival Chicago, in a move that could shift the competitive balance of the NL Central somewhat.

Losing Fielder will be a big blow, but the Brew Crew still have another uber talent in Ryan Braun, who is signed with the club until 2020 and is coming off probably his best all-around season as he enjoyed his first 30-30 campaign — the first such season in franchise history.

And how about Braun’s playoff performance? He smoked 17 hits in 11 games, giving him 22 career postseason hits, which ties him with all-time Brewer greats Paul Molitor and Robin Yount for the most in franchise history. Braun became just the seventh player in MLB history to get at least 21 hits in his first 50 playoff at-bats and all he did this year was hit .405 and drive in 10 runs in the Brewers’ postseason run.

Corey Hart continued to molest lefties (nine homers, 20 RBI, .333 in 102 at-bats), but he missed over a month with an oblique strain so he was unable to approach the counting numbers he put up in 2010. It took him some time to find his groove after the early-season injury, but his BA rose slightly and he improved his strike zone judgment. However, Hart didn’t flash the same kind of extra-base pop he did the season before.

Shaun Marcum, one of the team’s key pitching acquisitions last winter (along with Zack Greinke), was splendid for the first five months of the season, but he struggled in September and then got shell shocked in each of his three postseason starts. So even though he enjoyed his first 200-IP season and reduced his hit rates, it’s those 16 earned runs he gave up in 9 2/3 IP in the playoffs that will stick in our memory banks.

Greinke, meanwhile, was a big reason why the Brewers dominated at home. He went 11-0 with a 3.13 ERA at Miller Park. On the road, he was a different pitcher, going just 5-6 with a 4.70 ERA. Overall, Greinke’s first season in Milwaukee was strong. Although his walk rate rose slightly, he was harder to hit and rode his sharp breaking balls to the highest K rate of his career, a by-product to an extent of his first season getting to mow down opposing pitchers in the NL.

Unfortunately, Greinke flopped in the playoffs. Not a Marcum-type flop, but three unimpressive starts nonetheless. His ERA for the playoffs was 6.48, the second highest for one playoff season in big league history for a former Cy Young winner.

Veteran southpaw Randy Wolf bounced back nicely in his second season with the Brewers. Oh sure, he got shelled every now and then – such as the stinker he put up in Game Four of the NLDS – but every now and then – like in Game Four of the NLCS, when he earned his first career playoff win – he was in the zone, despite throwing some pitches that wouldn’t break a pane of glass. It took Wolf 342 career starts before he finally got a playoff win – the longest such streak among active pitchers. In fact, he had never even lasted more than 5 1/3 IP in any of his three previous playoff starts before tossing seven effective inning in Game Four.

The key for Wolf is getting ahead of hitters; when he had an 0-1 count, opponents hit just .236 against him, but when he goes to a one-ball count, they hit .460.

Still, the Brewers rotation was solid as the front four – which also includes 200-K man Yovani Gallardo – all won at least 13 games, worked at least 170 IP and had ERAs below 4.00. And yes, all four will be back next season, so this should remain a team strength.

In the bullpen, John Axford had a season for the ages. Not only did he prove that his fine – if unheralded – rookie season was no fluke, but he simply never gave the Brewers pause to consider replacing him as closer after a mid-season deal brought in a much more celebrated (and maligned) closer in Francisco Rodriguez. Axford sharpened his control enough to put up his first sub-2.00 ERA, an impressive turnaround considering he blew his first save and two of his first five chances. The Canadian righty recovered in remarkable fashion, setting a new franchise record with 46 saves (including his final 42 straight), good for a share of the NL lead.

The addition of K-Rod, the incredible bounce back season from LaTroy Hawkins and a superb second half from Takashi Saito (after he missed the first half with a hammy injury) helped give the Brewers a real shut-down pen. It’s no wonder the team only had one complete game (the second lowest total in the majors) — with a bullpen that strong, you let the starters go six or seven innings and then get out of the way.

By RotoRob
Tags: Milwaukee Brewers
This entry was posted on Sunday, October 23rd, 2011 at 11:24 am and is filed under BASEBALL, RotoRob, Team report. You can follow any responses to this entry through the RSS 2.0 feed. Both comments and pings are currently closed.