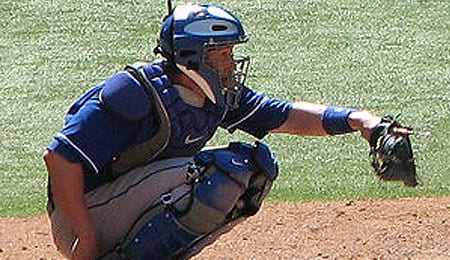 While John Buck has been solid behind the plate, it’s his bat that has Fantasy owners drooling.

It’s that time of the year when a little extra work becomes the norm for us Fantasy players. Interleague play arrives this week and with it the usual playing time issues. David Ortiz has been on a tear as of late, but where does he play in NL parks? Interleague action is a chore for both daily and weekly transaction leagues, but spending the time to find those extra at-bats is a worthy exercise as it could be a difference maker come October.

Moving on, let’s take a look at some waiver wire options for this week.

John Buck, C, Toronto Blue Jays: The former Royal seems to be settling into his new home in Toronto very nicely. In 103 at-bats he now has eight homers and 20 RBI to go along with a solid .272 BA. In the past two weeks he’s batting .333 with four homers and seven RBI and is currently owned in only 32 per cent of the leagues playing at Yahoo! He’s striking out a ton, with 31 whiffs against only four walks, but is hot and a solid option in all formats.

Jose Contreras, RP, Philadelphia Phillies: Incumbent closer Brad Lidge is moving from one DL stint to another, this time with right elbow inflammation. Meanwhile, Ryan Madson is on the 60-day DL recouping from his recent toe surgery. In a last man standing scenario, the Phillies have turned ninth inning duties over to Contreras. The ageless wonder (only because no one can be sure of his exact age), has been pitching lights out and, in 13 1/3 IP, has allowed a scant nine hits and two walks with a whopping 18 strikeouts. Who would have ever thunk it? Contreras escaped a bases loaded jam Saturday by striking out the final two batters to earn his first save. It is highly unlikely that he is the long-term solution for the Phillies, but he’s currently the man holding down the fort and should be rostered and active in all formats.

Brad Bergersen, SP, Baltimore Orioles: Bergesen started the 2010 campaign struggling and was shipped off to Triple-A, but since being recalled appears to have turned things around and now has three wins in three starts for the struggling Orioles. The low strikeout totals don’t bode well for standard 5×5 leagues, but he is a perfect fit in both AL-only and 4×4 formats.

John Ely, SP, Los Angeles Dodgers: The 24-year-old Ely has been a pleasant surprise for the Dodgers. Acquired from the White Sox in the off-season deal for Juan Pierre deal, he has been a very effective option since replacing Charlie Haeger in the rotation. In 18 2/3 IP, Ely has allowed 16 hits and only three free passes on his way to amassing a 3.86 ERA and 1.02 WHIP. Last year at Double-A Birmingham in 156 1/3 IP he sported a 14-2 won-loss record and allowed 140 hits and 50 walks while racking up 125 punchouts. Have the White Sox let another quality pitcher escape the fold? Ely is a solid addition in NL-only leagues and should be on the radar in all formats.

Ronny Paulino, C, Florida Marlins: The platoon situation with John Baker has come to a conclusion with Baker finding his way onto the DL with a right flexor muscle strain. In the interim, Paulino looks to gain some additional playing time and with two homers, 11 RBI and a solid .309 BA, he should be added in all two-catcher formats.

Hank Blalock, 1B, Tampa Bay Rays: The Pat “The Hack” Burrell experiment in Tampa Bay officially came to a conclusion Saturday when he was designated for assignment by the Rays. The Rays recalled Blalock to fill his slot on the roster and this off-season signing looks like it has potential to be a solid one. At Triple-A Durham, Blalock has slugged four homers, driven in 24 runs, and has a stellar .349 BA so far this season. He did manage to hit 25 homers last season for the Rangers so he still has some pop left in his bat. If your Fantasy squad needs a boost in the power categories, spending some of that FAAB money this weekend would be a solid choice.

Chris Capuano, Milwaukee Brewers, SP: If nothing else we have to take our hats off to Capuano for his perseverance. He hasn’t pitched in the bigs since 2007 and is attempting to make his way back from a second Tommy John surgery. In Capuano’s first rehab start at Triple-A Nashville Thursday, he tossed an eight-inning three hitter with five strikeouts. The Brewer rotation, with the likes of Dave Bush, Doug Davis, Randy Wolf and Chris Narveson, has been terrible so don’t be shocked to see Capuano pitching in Milwaukee some time in the near future.

Chris Tillman, SP, Baltimore Orioles: Let’s face it, David Hernandez is not going to be the stumbling block that delays the arrival in the bigs of Tillman or the other young budding ace in the Oriole system, Jake Arrieta. It’s a neck-and-neck race at this time to see who gets the call first but with Arrieta still demonstrating some control issues (18 walks in his past 24 IP), my money is on Tillman getting the call first. Tillman pitched a no-hitter back on April 28 and was one walk from perfection. In 44 2/3 IP, he has allowed only nine walks and appears to have very little left to prove in the minors. Get the jump on the competition, especially in AL-only leagues, and find a home for the 22-year-old phenom.

J.D. Drew, OF, Boston Red Sox: I happened to be roaming the player availability in several of my leagues (the Andre Ethier injury will do that to a guy) and stumbled upon somewhat of a surprise. Drew is owned in only 49 per cent of Yahoo! leagues. What’s up with that? He’s managed to hit five long balls and drive in 23 runs with a solid .282 BA. It’s worth a look and if by chance Drew has sneaked under the radar in your league, get him rostered and active immediately.

Michael Stanton, OF, Florida Marlins: The sky is the limit for Stanton and he’s demonstrating his amazing skills in a big way down on the farm. In 121 at-bats for the Double-A Jacksonville Suns he’s managed an incredible 15 homers, driven in 36 runs, and is hitting for average at .322. It’s only a matter of time before the 20-year-old mega phenom gets the call and rostering him now if he’s available is a prudent move. Stanton has the potential to be a difference maker in every format in the second half of 2010.

Russell Branyan, 1B, Cleveland Indians: Sure, the big contract was probably a mistake and we can debate it forever, but for us Fantasy players ours is not to reason why, just simply to take advantage of the statistics that are there for the taking. Branyan has managed three homers in the past week and could be on the verge of a hot streak. He’s only owned in a scant seven per cent of Yahoo! leagues, so is available. If your Fantasy squad needs a boost in the power numbers get the jump on the competition and find a home for Branyan.

Carlos Guillen, OF, Detroit Tigers: The struggling Scott Sizemore has been demoted to the minors and Guillen is set to assume the second base role upon returning from his most recent DL stint in a week-to-10 days. In AL-only leagues the player pool is limited so a preemptive bid here could prove valuable.