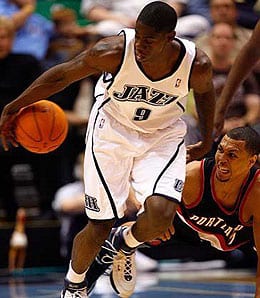 What a shock… Larry Hughes is hurt again. This is a good time for basketball fans as the NBA is ending its first month of the schedule and things are starting to happen. Tracy McGrady, Vince Carter and Larry Hughes are hurt (as if anyone still owns Hughes); Stephon Starbury isn’t happy, and Shaq sucks […]

Rookie Allan Ray is looking very strong in the absence of Delonte West. Everyone is rather used to seeing Jason Kidd rack up a triple-double, so when he did it last night, it was no biggie. But when Vince Carter joined him in the feat, the two became the first teammates to do so in […]

And we’re off. After the hype and excitement of a 7-1 preseason, the Raptors’ 2006-07 season got underway for real last night in New Jersey. While the false start — a 102-92 loss to the Nets — was disappointing, there is so much optimism that this club could potentially be playoff-bound this season, that one […]