The Wire Troll: Gary Neal Has the Feel 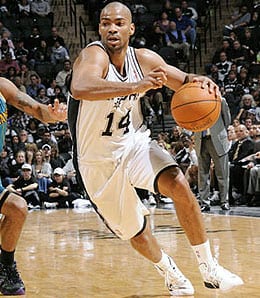 Gary Neal’s recent shooting touch has been off the charts.

Welcome back to another week of the Wire Troll, where we dig deep to find you the hidden gems to help you achieve Fantasy basketball glory.

We kicked off another exciting weekend of NBA action Friday as Rodney Stuckey exploded for a season-best 36 points, Bismack Biyombo threw a block party (and the Bobcats actually won a game – stop the freakin’ presses!) and DeMarcus Cousins played through a back injury to post yet another monster double-double – something that’s becoming quite routine since he helped usher Paul Westphal out of Sactown.

Alright… let’s get to our recommendations. As always, all players on the list are available in at least 50 per cent of leagues on both ESPN and Yahoo!

Gary Neal, PG/SG, San Antonio Spurs: Yes, Manu Ginobili is back now, but Neal is worthy of consideration in deeper formats as he’s been getting more burn lately and remains a superb source of treys. He’s been feeling it lately, draining 55.3 per cent of his shots in the past five games, including a whopping 53.3 per cent from beyond the arc. Smoking! If you need a boost in three-pointers, Neal is a fine choice, especially if his minutes continue to creep towards an average of 25 per game.

Danny Green, SG/SF, San Antonio Spurs: It’s obvious Ginobili is not fully 100 per cent yet (just 20 minutes Wednesday), so Green has been starting at the two in San Antonio recently, making him worth a short-term look. We recommended the former Tar Heel star a few weeks ago, and this could be his last harrah this season, so plug him in while he’s producing. In 28 minutes on Wednesday, Green hit 4-of-7 from the field (including 3-for-6 from downtown) for 13 points while adding seven boards (which tied his career high). The Spurs have a well-balanced attack, meaning Green could continue to provide some value in very deep formats, but for now, he’s showing enough low-level production to be considered a short-term add in most formats.

Ben Gordon, PG/SG, Detroit Pistons: Now that his shoulder is healthy, Gordon is starting to put up low-level Fantasy worthy numbers in points and treys, but to be truly valuable in standard formats he’ll need more consistent PT, and that’s hard to come by off the bench.

Bill Walker, SG/SF, New York Knicks: Melo could be back Monday, so Sunday might be Walker’s last chance to start. Here’s betting he’ll be doing his best to make it a worthwhile one, although he really hasn’t done much with his chance so far, so this is a plug-and-play option only for very deep leagues (say, 16 teams or more).

Tristan Thompson, PF, Cleveland Cavaliers: With Anderson Varejao gone for up to six weeks with a busted wrist, Thompson is finally going to get a consistent chance to show what he can do. We ranked the rookie as a top 35 power forward heading into the season, but he’s been way off the Fantasy radar so far. I actually drafted him as a flier pick, but it quickly became clear that he wouldn’t get his chance to shine until later in the season. Sideshow Bob’s injury, however, has accelerated that timetable, so it’s time to give the young Canadian a look. In 26 minutes on Friday, he was 4-for-7 from the field and 4-for-5 from the line (which was very nice to see considering how much he’s struggled from the charity stripe so far) for a dozen points while adding six boards and two blocks. A lot of people thought Thompson had a chance to be one of the season’s top rookies, and now we’re going to find out just how good he is. Grab him in leagues of 14 or more teams now, and put him squarely on your watch list in standard formats.

Richard Jefferson, SF, San Antonio Spurs: Yes, another Spur. RJ has found his stroke recently (11-for-18 in the past three) and is a superb source of treys, averaging a career-best 2.1 trifectas per game. Hell, he even helped out with some rare peripheral activity on Wednesday with three steals and a block. Jefferson’s days as a Fantasy stud are over, but for category chasers that need help in treys, grab him while he’s feeling it.

James Johnson, SF/PF, Toronto Raptors: The minutes have been all over the map, but Johnson got a healthy 37 minutes worth of run in a start at the three on Friday and showed what he can do — 14 points and eight boards. If the PT is there, his blocks and steals will be gold.

Klay Thompson, SG/SF, Golden State Warriors: Thompson has hit double digits in points in four of the past five, is an excellent source of 3-pointers and could get a major boost if Monta Ellis’ knee injury is serious.

Jason Maxiell, PF/C, Detroit Pistons: We’ve always liked Maxiell and every now and then (most recently two seasons ago) he seems on the cusp of showing something big. Last season he had a reduced role in Detroit, however, over the past few games he’s found himself not only back in the mix, but starting as the team needed a jolt of energy. And better yet, the Pistons have been winning, going 6-3 since Maxiell moved into the starting PF slot. That means he’s probably going to stick in the starting five for the foreseeable future, and while his offensive upside is limited, he’s a decent choice in very deep formats for those seeking boards (6.4 over the past five) and blocks (1.4 per game over that stretch).

Ed Davis, PF/C, Toronto Raptors: We recommended Davis a few weeks back, but with Andrea Bargnani still not ready to return, the youngster’s window for Fantasy value will continue for the time being and he remains widely available. On Friday, he played a healthy 31 minutes off the bench, just missing a double-double while pitching in with a couple of steals and an assist. Davis has shot it very well lately (58.6 per cent in the past five) and he’s committed just one turnover in the past six games combined. As Toronto falls further out of the playoff picture, look for Davis to get more burn in the second half.

Ben Wallace, PF/C, Detroit Pistons: Big Ben has been getting a bit more burn lately (at least 21 minutes in two of the past three), making him worth a look for extremely deep league owners chasing boards. His per-minute rebounding numbers remain elite even as he talks about packing it in after the season.

Zaza Pachulia, Atlanta Hawks: Zaza’s still widely available and the tough centre has quietly been getting the job done. As an added bonus, his name’s fun to say.